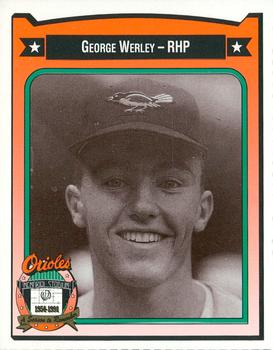 On September 29, 1956, three weeks after his 18th birthday, George Werley debuted for the Baltimore Orioles after an outstanding summer of amateur baseball. The right-handed pitcher worked one inning, then never appeared in the majors again.

George William Werley was born on September 8, 1938, in St. Louis, Missouri. His parents, George Joseph Werley and the former Virginia D. Ritchie, initially lived with his paternal grandparents, according to the 1940 census. His father was the part-owner of a greenhouse for a retail florist.

By the time George was 4, he had moved with his parents into their own home at 523 Bellsworth Drive, about a mile west of the banks of the Mississippi River, He also had two younger siblings, sister Joan and brother Richard. The family was of German and French ancestry.1 George was only 9 when he made his first appearance in a St. Louis newspaper photo, beaming alongside some of his St. Martin of Tours classmates. They’d won the Quizdown competition among local schools, and the contest was broadcast on radio station KMOX.2 Over the next decade, however, it would be his athletic exploits that earned him steady local coverage.

In 1951, for example, a 12-year-old Werley pitched the first nine innings of the Vescova Builders’ 10-inning, 2-1 defeat in the Khoury Midget League. He struck out 18 Frailey’s Gang batters at Memorial Field that day, and the News-Times of Webster Groves noted that he also stroked two hits at the plate.3 After Werley earned all eight victories for an undefeated St. Martin of Tours team in 1952, he started the Catholic Youth Council Parochial Boys championship game at Sportsman’s Park. The contest took place before the Browns and Senators played to an 18-inning tie on June 20.4

The day before Werley’s 15th birthday, the St. Louis Globe-Democrat mentioned his 12-strikeout no-hitter for the Southern club against the Rau’s team in the Khoury Baseball Association’s juvenile division.5 By 1954, Sportsman’s Park had been re-named Busch Stadium when he returned there with his Aubuchon-Dennison Post team for the state’s American Legion finals in August.6 Werley’s 4-0 record helped them reach the playoffs.7

By that time, Werley was a student at St. Louis University High School, the oldest private Catholic high school west of the Mississippi River.8 In addition to baseball for the institution’s Junior Bills, he quarterbacked the football team for four years and played basketball for his first three. In the summer of 1955, prior to his senior year, he continued to build his baseball resume. He ran his two-year American Legion record to 9-0.9 When his Kutis club won the city’s MUNY League junior title, Werley won the clinching game, carrying a no-hitter into the final inning.10

In 1956 Werley’s star shined the brightest. Early in his senior season, he tossed a 17-strikeout, one-hitter for St. Louis University High.11 Though he pitched valiantly in the state’s high school tournament, his Junior Bills career ended in defeat when his teammates were shut out, 2-0, on one hit.12 Nine days later, he whiffed 18 batters in just eight innings for Aubuchon-Dennison in a contest shortened by darkness.13 Werley lost an American Legion game for the first time that summer, but he earned the Leo A. Browne Memorial trophy as the most valuable player in the St. Louis area. In 54 1/3 innings for his Legion post team, he struck out 98 and surrendered only 24 hits. In one stretch, he hurled 34 consecutive innings without allowing an earned run.14 In August, Werley traveled to Altoona, Pennsylvania, for the National Amateur Baseball Federation junior tournament. His Eastern Missouri Ban Johnson League club sponsored by Meramec Caverns Recreation went 5-0 to win the title, and he won both of his decisions.15 Earlier that month, the St. Louis Globe-Dispatch said, “He entertains hopes of a professional baseball career after finishing college.”16 On August 29, the same paper ran a photo of Werley and another player smiling with the captain of St. Louis University’s college baseball squad after accepting scholarship offers.

Five days later, however, the September 3 edition of the Baltimore Sun reported, “The Orioles, winning out over competition from every club in both major leagues, announced last night the signing of a 17-year-old hurler from St. Louis.”17 Werley’s hometown paper said he’d agreed to a nominal bonus and the major league minimum salary of $6,000 offered by scout Bud Grasser because “he thought he had the best chance for quick advancement on the Baltimore roster.”18 According to a Baltimore article and, later, a questionnaire filled out by the pitcher himself, Phil Gallivan was the signing scout.19 Gallivan told Orioles farm director Jim McLaughlin that the 6-foot-2, 196-pound right-hander with the blazing fastball and good curve was the “best pitcher to come out of St. Louis in the last four years.”20

Werley joined the Orioles a few days later and made his major league debut on September 29, three weeks after his 18th birthday. While he remains the third-youngest player to appear for Baltimore as of 2020, he was only the second-youngest to see action that Saturday evening

at Griffith Stadium against the Senators; 17-year-old Ron Moeller made his first career start for the Orioles following a trio of relief appearances. Baltimore was already down, 6-0, when Werley, wearing number 15, entered to pitch the bottom of the eighth. In front of an announced crowd of 1,129, the first batter he faced was Washington’s Herb Plews, who pulled a grounder to the first baseman. Werley earned credit for a quick putout by racing to the bag to receive Bob Hale’s throw. After Ed Fitz Gerald grounded to shortstop Billy Gardner for the second out, Pete Runnels and Roy Sievers drew consecutive walks. Jim Lemon singled to left-center to drive in a run before Harmon Killebrew grounded to Gardner to end the inning. Werley’s ERA was 9.00, but the Baltimore Sun reported he “nevertheless showed a good fastball and considerable poise in his one-inning trial.”21 In retrospect, the game is also notable because, in the ninth inning, Brooks Robinson hit the first home run of his Hall of Fame career.

When Werley reported to spring training in Scottsdale, Arizona, before the 1957 season, the Orioles altered his delivery slightly and he suffered a minor knee injury. He began the season with the Aberdeen (South Dakota) Pheasants in the Class-C Northern League. Cold and rain played havoc with the club’s early-season schedule, so Werley only made two appearances before heading to Baltimore in late May to work out with the Orioles.22 He spent the bulk of the year with the Fitzgerald (Georgia) Orioles in the Class-D Georgia-Florida League. In 10 starts and 11 relief appearances, Werley struck out 76 batters in 49 innings, but struggled with his control and finished 2-4 with a 7.90 ERA.23 He earned his first pro victory in unlikely fashion. After entering in relief with his team trailing, 10-0, he struck out 10 in scoreless innings as the Orioles rallied to win, 14-10. In a phone call to his parents, he shared that after his only two walks of the outing, “[Fitzgerald manager Earl] Weaver told Werley he was throwing overhand instead of the three-quarter pitch he had been using earlier in the game.”24 At the end of the season, Werley and Weaver drove home to St. Louis together.25

Baltimore’s Georgia-Florida affiliate moved to Dublin (Georgia) in 1958. On opening night, the Orioles lost a sloppy contest marred by 10 errors on a field that had been chopped up by a recent rodeo. Werley starred out of the bullpen, however, pitching hitless relief after entering in the sixth and whiffing six.26 On May 20, he pitched all 13 innings of a victory against the Waycross Braves. His mother told a St. Louis paper that Weaver had called her son “a greatly improved player this year.” His father, once an all-around athlete at Cleveland High and Carondelet DeMolay, observed, “George is looking pretty sharp now. He’s more settled than he was last year, and his control is much better.”27 Shortly after his parents’ departure, Werley left a game feeling weak in the sixth inning. He was hospitalized the next day and underwent four days of checkups to see if he might be suffering from spinal meningitis. His record was 9-10 at the time.28 With a clean bill of health, he returned and won his last seven decisions. He finished the 1958 season with a 16-10 record and 4.28 ERA, working 208 innings

Werley was a year-and-a-half into his studies at Washington University in St. Louis when the 1959 season began.29 He started the year with four appearances for Aberdeen before moving to a different Class-C affiliate in the California League. For the Stockton Ports, he struck out 14 Visalia Redlegs on June 9 and came within one out of his first professional shutout before a bad-hop single cost him a run.30 Overall, in 17 appearances (eight starts) for the Ports, he was 3-3 with a 6.14 ERA. On July 10, he was demoted to the Pensacola Dons in the Class-D Alabama-Florida League, where he was 3-5. On August 20 in Selma, Werley made his last appearance in professional baseball, a 1-0 loss as the Dons were no-hit by 6-foot-4 southpaw Jerry Fosnow.31

Werley turned 21 a month later and transitioned to a quiet life outside baseball. He became a successful businessman in St. Louis, the president of the Wenzel Tent and Sleeping Bag Company.32 He married Carole Marks, an interior designer. They had two daughters, Leslie and Karin, before divorcing after 29 years.

In 2006, as the 50th anniversary of Werley’s inning for the Orioles approached, Dan Connolly of the Baltimore Sun tried to interview him for an article about the team’s one-game wonders. Unfortunately, Connolly wrote, “He did not return phone calls.”33 On November 21, 2013, George Werley died in St. Louis. He was 75. He was interred at Valhalla Cemetery in St. Louis.

This biography was reviewed by Bill Nowlin and Norman Macht and checked for accuracy by SABR’s fact-checking team.

In addition to the sources cited in the Notes, the author also consulted www.ancestry.com and www.baseball-reference.com and the 1940 United States Census.