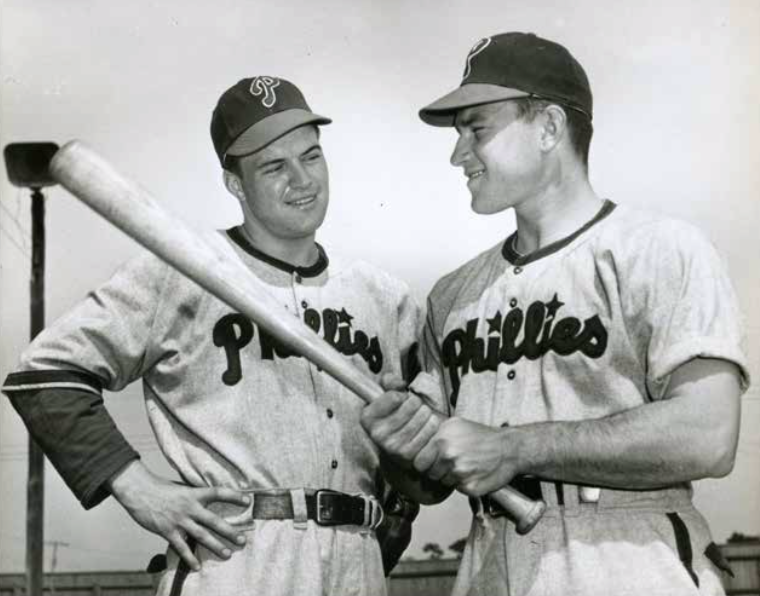 In the outfield, Jack Mayo was an excellent fielder, smooth, graceful, and fast. On the basepaths, he was one of the fastest men in the National League. His speed and fielding prowess earned Mayo a place on the famous Whiz Kids of the Philadelphia Phillies. But his inability to hit consistently limited him to part-time duty and denied him big-league stardom.

John Lewis Mayo was born July 26, 1925, in Litchfield, Illinois, just off U.S. 66 in the coal-mining area about halfway between Springfield and St. Louis. A son of Alice Mayo and John L. Mayo, a labor union official, he moved with his family to Youngstown, Ohio, at the age of 12. After graduating from Rayen High School in Youngstown in 1942, he joined the US Marines and served two years in World War II, attaining the rank of second lieutenant. From 1944 to 1947 Mayo attended the University of Notre Dame. According to Stan Baumgartner, writing in The Sporting News on April 2, 1952, “Mayo never played baseball until he went to Notre Dame under the service program. There he learned to play baseball and also starred on the track team,” captaining the baseball team and graduating with honors. A natural right-hander, he learned to bat left-handed. While at Notre Dame he played a summer in Vermont in the Northern League against future teammate Robin Roberts.1 The 21-year-old outfielder-first baseman stood 6-feet-1 and weighed 190 pounds. Upon graduation from Notre Dame in 1947, he was signed by the Philadelphia Phillies as an amateur free agent.

The Phillies sent Mayo to the Vandergrift (Pennsylvania) Pioneers in the Class-C Middle Atlantic League, where he appeared in 48 games and hit at a .355 clip, with an impressive .482 slugging average. In November the Chicago Cubs acquired him from the Phillies in the minor-league draft. However, he never played a game for the Cubs, as they returned him to Philadelphia before the beginning of the 1948 season. The Phillies sent him to their Utica farm in the Class-A Eastern League, where he hit .273 in 137 games, good enough to earn a late-season promotion to the big leagues.

Mayo played his first major-league game for the Phillies on September 19, 1948, in a doubleheader against the Pirates at Shibe Park; it was a debut to be remembered. Playing left field and batting fifth against Pittsburgh’s blooper-ball pitcher Rip Sewell, he made outs in his first two at-bats, but in the fifth inning he swatted a triple off reliever Woody Main for his first hit in “The Show.” In the nightcap, he went 3-for-3, with a double, two singles, a run scored, and one batted in. During the remainder of 1948 Mayo didn’t fare so well, however, hitting only .229 in the 12 games he played.

Because Mayo had been designated as a bonus player, he could not be sent down to the minors in 1949 without going through waivers under the rules in effect at that time. So he remained with the Phillies, sitting on the bench and frequently appearing as a late-inning defensive replacement. Richie Ashburn’s parents ran a boarding house in a rented home in suburban Bryn Mawr that season and Mayo lived there with teammates Robin Roberts, Richie Ashburn, Curt Simmons, and Charlie Bicknell, all feasting on Ashburn’s mother’s home cooking.2 Mayo’s season came to a premature end, however, on July 5 when he broke his ankle in Brooklyn. For the year he appeared in 45 games, and hit only .128 in 39 times at bat.

In a game in St. Louis on June 17, Mayo unintentionally contributed to Cardinals catcher Joe Garagiola making three putouts and two assists in one inning, which may be a record.3 With Mayo on third base and Willie Jones on first, they attempted a double steal. Garagiola threw the ball to second baseman Red Schoendienst, who returned the throw to the catcher, who tagged Mayo out (one assist and one putout on this play). In a slight exaggeration The Sporting News reported that Mayo almost broke the catcher’s back when he stepped on him while trying to jump over him.4 When Ralph Caballero singled, Jones attempted to score and was thrown out at the plate for Garagiola’s second putout. On the throw to the plate Caballero attempted to go to second and the catcher threw him out for his second assist. He got his third putout of the inning when he caught a third strike taken by Robin Roberts.

In September 1949 Mayo cleared waivers and was released to Toronto although he was still not able to play because of his ankle. The Phillies finished third in the National League and divided their pool into 32 shares worth $721.85 each. Despite his limited contributions during the season, Mayo received a full share.5 Eddie Sawyer, the Phillies manager, was quoted as saying that Mayo was the fastest runner in the National League, although not as adept at baserunning as Jackie Robinson.6

Mayo was noted for his tall, athletic good looks. Before a 1950 spring-training game in Clearwater, Florida, the club had Mayo model the club’s new red pinstriped uniforms before the media and front office. Owner Bob Carpenter’s wife, Mary, was present and said, “This really isn’t fair. Jack Mayo would look good in anything.”7

Nonetheless, Mayo spent most of the 1950 season with Toronto, hitting a very respectable .293 in 146 games for the Maple Leafs. In September he was called back up to Philadelphia and got into 18 games with the Phillies, who were in the midst of a pennant race. In the sixth inning of a game against the Braves on September 10, he smashed a ball against the light tower in right field for what appeared to be his first major-league home run. Before the inning could be completed, however, rains came, causing the game to be halted. The score reverted back to the fifth inning and Mayo’s apparent homer was washed off the board. It was not until 1952 that he hit his one and only official home run in the majors.

In the pivotal final game of the season against the Dodgers in Brooklyn, manager Sawyer sent Mayo into left field as a defensive replacement for Dick Sisler in the bottom of the 10th inning after the Phillies had gone ahead 4-1 in the top half of the inning on Sisler’s dramatic three-run homer. The first batter to face Phillies ace Robin Roberts was Roy Campanella, who had slugged 31 home runs that year. On a 1-and-1 pitch Campanella smacked a line drive to left that Mayo, by his own account, made a pretty good running catch of for the key first out of the inning.8 Roberts went on to retire the next two batters to clinch the pennant for the Phillies.

In the 1950 World Series Mayo made three appearances and was involved in one of the pivotal plays in the Yankees’ four-game sweep. In Game Two he pinch-hit for Robin Roberts in the 10th inning and drew a walk. Then in the eighth inning of Game Three he replaced Dick Sisler in left field for defensive purposes with the Phillies clinging to a 2-1 lead. The Yankees tied the score in the eighth and the Phillies were unable to score in the top of the ninth. In the bottom of the inning, Mayo caught Billy Johnson’s line drive for the first out. But with two outs, the Yankees rallied, thanks to two infield singles, and had runners on first and second. Jerry Coleman then hit a fly ball smack between Mayo and Richie Ashburn in left-center field. Both appeared to hesitate slightly in going for the ball and it fell in for a single as Gene Woodling scored easily from second base with the winning run to give the Yankees a 3-0 Series lead. Finally, in Game Four, Mayo pinch-ran for Andy Seminick in the ninth inning and went to second on a single by Mike Goliat, but was stranded there as Stan Lopata struck out to end the inning, the game, and the Series.

During the offseason, the Phillies faced a dilemma — four or five viable candidates for three outfield posts. Richie Ashburn and Del Ennis had two of the spots locked up. Sisler and Mayo were viewed as the main competitors for the left-field position. Of the two, Sisler was the better hitter, while Mayo was a better fielder. J.G. Taylor Spink wrote in The Sporting News that “Mayo is a real gazelle, one of the finest fly chasers in baseball. He is smooth, graceful, and fast.”9 Spink suggested that if Mayo could hit major-league pitching consistently he would win the job. Bob Carpenter, the president of the Phillies, said, “I feel that Mayo deserves every chance to make the team — and he will be given a thorough tryout.”10

But Mayo’s performance during 1951 spring training was not good enough to win him a place on the Opening Day roster. With the bonus rule off the books, he was demoted to the minors. He played 126 games for Baltimore in the Triple-A International League and hit .271, earning another shot at the big time, but he was never able to win a full-time job in the major leagues. He played nine games in the majors in 1951, fifty in 1952 (when he spent the entire season with the Phillies, hitting .244 in 132 plate appearances), and five in 1953.11 He played his final game at the age of 28 on September 27, 1953, against the Brooklyn Dodgers at Connie Mack Stadium. In the ninth inning he pinch-hit for Karl Drews and grounded out to second baseman Jim Gilliam. He played two more years in the International League before retiring after the 1955 season at the age of 30.

After ending his baseball career, Mayo returned to Youngstown, his adopted hometown. In 1959 he started the real-estate firm of Mayo & Orvets, which later became Mayo and Associates. He was a successful residential home developer and also developed and managed several large commercial buildings. As president of the Youngstown Board of Realtors, he was known as the “Dean of Real Estate” throughout the area.12 An avid golfer, Mayo also found time to play tennis.

In 1949 Mayo married Patricia McCabe. This union produced four children (John, Susan, Janet, and Richard), 14 grandchildren, and two great-grandchildren. Patricia Mayo died in 1998. In 2002 Jack Mayo married Jennifer Rose DeChicco. For some time he was said to be the oldest surviving member of the Whiz Kids. He died at Assumption Village, an assisted-living facility in Boardman, Ohio, a suburb of Youngstown, on August 19, 2014, at the age of 89.

3 The Sporting News, June 29, 1949. In its account of the game the paper referred to Mayo as Johnny Mayo. The self-described “Baseball Bible” was inconsistent in its use of Mayo’s first name, variously calling him John, Johnny, Jack, or Jackie.

11 His .286 batting average for the International League Baltimore Orioles earned him his final late-season call-up in 1953.