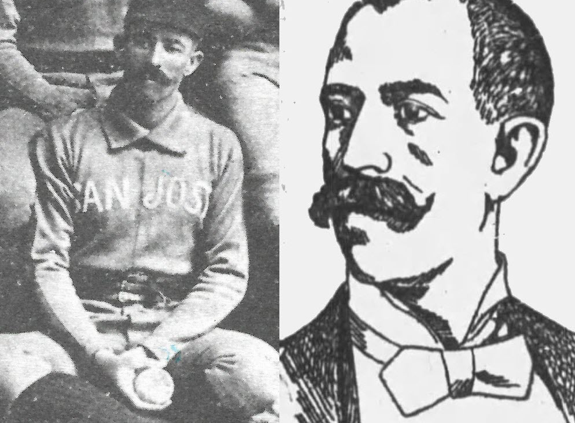 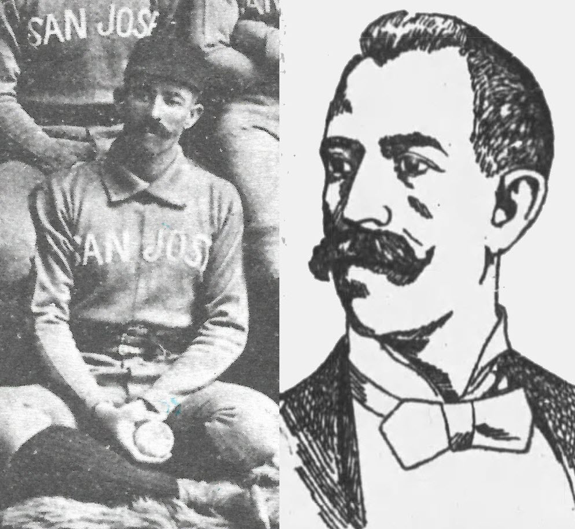 It is hard to imagine a pitcher exceeding White’s total. But in 1892 Jacob Lookabaugh pitched 803 innings for the San Jose Dukes of the California League. In 1903 Joe McGinnity pitched 434 innings and was known as “Iron Man” for his endurance. Lookabaugh deserves a grander title, maybe “Titanium Man” or “Superman.”

Jacob Duncan Lookabaugh was born in or near Pittsburgh, Pennsylvania, on March 28, 1863.1 He was of German ancestry, the fifth of eight children born to Jacob and Rachel (Buzzard) Lookabaugh.2 In 1880 the family resided in Mount Morris, Illinois, where Jacob Sr. farmed.3 Perhaps to distinguish father from son, Jacob Jr. became known as “Nick” Lookabaugh.

Young Lookabaugh left home and ventured west. He had a slender build. Reports of his height varied from 5-foot-8 to 5-foot-9 ¾, and his weight was said to be 155 pounds.4 He was described as a genial fellow with a “perpetual smile.”5 In August 1886, he played shortstop for a Stafford, Kansas, team.6 The next year he pitched for teams in Red Cloud, Nebraska,7 and Smith Center, Kansas. A right-hander,8 he struck out 16 batters on September 14, 1887, in Smith Center’s 18-8 romp over Burr Oak, Kansas.9 (It is not known whether he was a left- or right-handed batter, but either way he was a weak hitter with a “peculiar style of batting.”10)

In 1888 Lookabaugh pitched for Danville and Rockford, Illinois, in the Central Interstate League, and for teams in Santa Fe, New Mexico, and Beatrice, Nebraska.11 In 1889 he pitched for the Pueblo Ponies of the Colorado State League, and after that league disbanded he joined a McCook, Nebraska, team.12 He found stability the following year in California.

He pitched his first game for the Metropolitans on April 5, 1890, and impressed observers. On a “cold and disagreeable” day at the Haight Street Grounds in San Francisco, he beat the Senators, 2-1. The San Francisco Examiner noted that he had “splendid command of the ball” and threw a fastball, “sharp curves,” and “a raise ball.”13 But Lookabaugh apparently did not possess great speed, relying instead on changing speeds effectively, mixing his fastball with “slow, sneaky curves.”14 In 1892 the Examiner would report that he threw not only a fastball and curveballs, but also a “mysterious slow ball.”15 He simply “floated”16 this pitch across the plate; “the ball was most always popped up into the air or else jogged down at some infielder.”17 The pitch “scarcely had speed enough to penetrate the fog” in San Francisco, yet batters struggled to hit “the snaky balls that crept slowly and aggravatingly past.”18

It seems that Lookabaugh was throwing a knuckleball. Easier on the arm than other pitches, the knuckleball would have helped him to work so many innings. The Los Angeles Herald stated in April 1892 that “as everybody knows, Lookabaugh is in his element on a cloudy day.”19 Perhaps he threw a knuckleball that fluttered more on cloudy days. My knuckleball “did more for me” in “damp and cloudy” weather, said the famous knuckleballer Hoyt Wilhelm nearly a century later.20

Teams in the California League used two-man pitching rotations. When the Metropolitans’ other hurler, Otto Young, was ill, Lookabaugh was asked to pitch three consecutive days, July 10-12, 1890, against the Colonels. He lost the first game, 12-6, won the second, 3-2 in 12 innings, and lost the third, 10-6.21

The 1890 season ended on November 23 with San Francisco in first place sporting a 79-58 record, a half game better than Sacramento.22 The Metropolitans were awarded the pennant after the Senators declined to participate in a playoff series.23 Sporting Life reported that Lookabaugh had pitched 59 full games with a record of 31 wins, 26 losses, and two ties.24 Assuming an average of nine innings per game, that amounts to 531 innings pitched.

In 1891 the San Jose Dukes replaced the Stocktons in the four-team California League. Mike Finn left the Metropolitans to become manager of the Dukes, and he brought Lookabaugh with him. Lookabaugh threw two early-season shutouts, blanking the Senators on April 5 and the Colonels on May 17.26 He benefited from the Dukes’ potent offense in defeating the Colonels in two slugfests, 17-11 on June 20 and 20-14 a week later.27

On September 11, he tossed a two-hitter to defeat San Francisco, and he threw another two-hitter on November 7 to beat Oakland.28 His finest gem was a one-hit shutout of Sacramento on November 22, the last day of the season.29 The San Jose Herald called him “the star pitcher of the league.”30

The Dukes won the final 13 games of the season and captured the pennant with a 90-57 mark.31 Lookabaugh pitched 577 innings and achieved a 43-25 record with a 1.74 ERA.32 Adding to his workload, he pitched in a 19-game postseason series against the Portland Gladiators, champions of the Pacific Northwest League. The Dukes prevailed, 10 games to 9, in the long series, which went from November 26, 1891, to January 10, 1892.33

There was little time to rest. Lookabaugh pitched San Jose’s 1892 season opener on March 26, a 4-1 triumph over Oakland.34 And for the next eight months, he pitched regularly in a two-man rotation with George Harper. In working 803 innings, Lookabaugh averaged 11 complete games and 100 innings per month. By comparison, Verlander in 2019 averaged 5 ½ incomplete games and 37 innings per month over a six-month period.

Lookabaugh was surrounded by talent on the 1892 Dukes. A trio of outfielders — Joe McGuckin in left field, Carl McVey in center, and George Stallings in right — were “an unfailing source of wonderment. … Their handling of hard hit flies has without doubt never been surpassed by any outfield” in California.35 Jerry Denny thrilled spectators with his “phenomenal one-hand stops” at third base.36 Few baserunners attempted to steal a base when Bill Clarke, a strong-armed catcher, was behind the plate.37 Second baseman Buck Ebright, the team captain, was one of the league’s best hitters.

In San Jose on the afternoon of Sunday, April 17, before 3,000 fans, Lookabaugh hurled a three-hitter as the Dukes edged San Francisco, 3-2.38 Professional baseball on Sunday was illegal in many parts of the country, but not in California. Church-going residents of San Jose were initially opposed to Sunday ballgames but later endorsed them when they discovered that local men were choosing the ballpark over “beer and billiard halls.”39 Saloonkeepers were displeased.

Lookabaugh won seven consecutive games from April 15 to May 4. He tried for his eighth straight victory in San Francisco on May 6. In a modern game, the ball is replaced often, but in the 19th century, the same ball was used throughout the game. With the Dukes trailing, 4-3, he retired the San Francisco batters in the top of the ninth. Over the course of the game, the ball had become soft, with a loose cover, and was difficult to hit for any distance. As Lookabaugh returned to the bench, he threw the ball over the fence when the umpire was not looking. He was hoping that a newer, more hittable ball would be put in play as his team came to bat in the bottom of the ninth. “Lookabaugh sat on the bench looking as solemn and thoughtful as a boy studying his Sunday school lesson.”40 But the ball was retrieved and put back in play. San Jose failed to score, and his winning streak was over.

The 1892 Dukes wore uniforms that were “somber black” in color, until May 8 when they debuted all-white attire. The San Francisco Call wondered whether “the players while dressing had been chased out of the clubhouse in their underclothes,” or whether “a team of bakers had come out to play.”41 Later, in a laundry mishap, Lookabaugh’s white uniform was tinted pale blue.42 On June 4 he delivered a four-hit shutout against San Francisco.43 He pitched three days in a row against the Los Angeles Angels, June 29 to July 1, and lost all three games, allowing 25 runs and 40 hits.44 The season was split into halves. With a 48-37 record on July 24, the Dukes won the first-half title by a half-game margin over the Angels.45

Lookabaugh again pitched three days in a row, this time in San Francisco, July 29-31, surrendering 35 runs and 51 hits.46 The Examiner reported that he had a sore arm on August 24,47 yet he continued to pitch. He lost five games in a row, August 24 to September 5, but rebounded on September 7, puzzling batters with his “dips, shoots and angles” in a four-hit shutout at San Francisco.48 He threw two more shutouts against San Francisco, both three-hitters, on October 9 and November 17.49 In the latter contest, he dueled Jack Fanning in a 10-inning scoreless tie.

With a lackluster 36-49 record, the Dukes finished in last place in the second-half standings.50 As first-half champions, they were invited to play the Angels, second-half winners, in an unofficial playoff. Lookabaugh played second base and right field in the nine-game series won by the Angels.51 He did pitch one game, on December 9, and lost 6-1.52

In 803 innings pitched during the regular season, Lookabaugh was credited with 45 wins, 43 losses, and a 1.70 ERA. He was not the only pitcher in the league to carry a heavy load. Also enduring were Jack Fanning (729 innings), George Harper (697), Frank Hoffman (678), Les German (655), Louis Balsz (603), and Jack Horner (595). With two-man rotations the norm over a 170-game schedule, the 1892 California League season may have been the most demanding on pitchers in baseball history.

Verlander pitched 1,917 innings over nine seasons, 2011-19. Lookabaugh pitched a similar number of innings in three years, 1890-92. A barber by trade and needing a break from baseball, he opened a barbershop in San Jose in the spring of 1893.53 He returned to the California League on July 7, 1893,54 and pitched for Sacramento for a month until the league folded. That fall he pitched briefly for the San Jose team in the Central California League.55

In the spring of 1894, Lookabaugh joined the Nashville Tigers, managed by George Stallings, but pitched ineffectively and was released. He was picked up by Buck Ebright’s Lincoln, Nebraska, team, but again proved ineffective. On May 29, 1894, a Jacksonville, Illinois, squad clubbed five home runs off his deliveries.56 He was released by Lincoln in July and pitched for Omaha for a month. But there was nothing left in the tank. Finally, after a short stint on a Bloomington, Illinois, team in May 1895, he called it quits.

Lookabaugh settled in Streator, Illinois, where he worked as a barber and played occasionally on a local semipro team. About 1901 he moved to Lindenwood, Illinois, where he continued his barbering for two decades. He was afflicted with dementia in his early sixties, and on June 8, 1925, he was committed to the Watertown State Hospital, a mental institution in East Moline, Illinois.57 He died there on July 3, 1925, and was interred at the Lindenwood Cemetery.

Image: Photo of Lookabaugh in an 1891 San Jose Dukes uniform and drawing of Lookabaugh from the April 5, 1894, issue of the Nashville Banner.