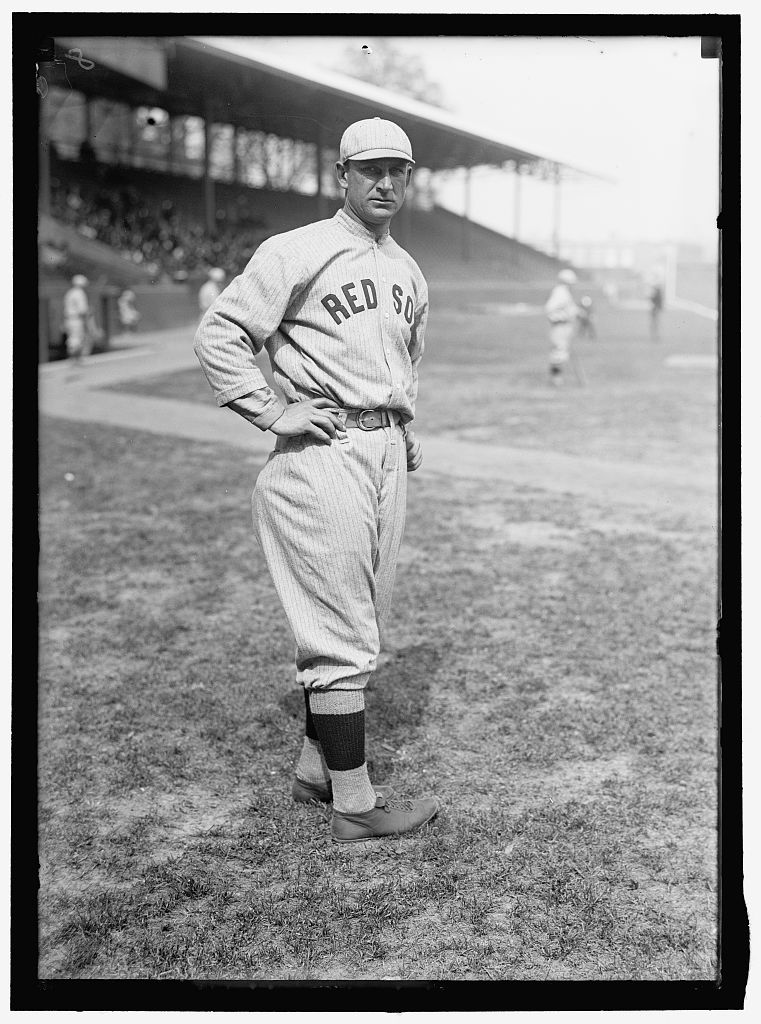 Big, powerful, and deceptively fast, Garland “Jake” Stahl parlayed the skills he first demonstrated as a college football and baseball star at the turn of the century into a successful major-league baseball career, primarily with the Boston Red Sox. At 6-foot-2 and 195 pounds, the right-handed Stahl was one of the most intimidating sluggers of the Deadball Era’s first decade.

Jake Stahl holds a special place in Red Sox history. He remains the first and only Red Sox player who was on two different Boston World Championship teams in two different decades: 1903 and 1912.

In 1903, Jake played 40 games as a rookie catcher behind Cy Young-favorite Lou Criger. He did not play in the subsequent 1903 World Series, and his keen disappointment at missing that opportunity became one of the key forces driving him throughout the remainder of his playing career.

Garland Stahl was born on April 13, 1879, in Elkhart, Illinois, the third son of Henry and Eliza Stahl. Henry was a front-line Union veteran of the Civil War who survived the horrors of the bloodbath at Shiloh. After the war, Henry and Eliza opened a thriving general store in Elkhart. In naming her third son, Eliza used the name of one of her brothers-in-law, Garland.

After graduating from high school (which at that time went only to the 10th grade) and working at the family store, Stahl enrolled at the University of Illinois. His fraternity brothers nicknamed him Jake. University of Illinois football coach George Huff (who briefly managed Boston in 1907) encouraged him to try out for the team.

With forward passes not allowed yet, no offensive/defensive specialization employed, and only rudimentary protective equipment used, the resulting two-way game was particularly brutal. As he matured physically, Jake became both an outstanding running back on offense and a smart, quick lineman on defense. He had his best year as a junior in 1901, when he was named to the All-Western Conference football team. He was named captain of the Illinois football team in 1902. In his first formal leadership position, Jake was required to address not only his personal needs but the needs of the entire team. It was a skill he would continue to hone throughout both his baseball and subsequent banking career.

Huff also coached baseball at the University and encouraged Jake to join his highly successful squad. As the starting catcher, Jake batted .441 his sophomore year, and in his senior campaign, led Illinois to a Western Conference Championship.

Exhibiting an outstanding ability to organize and focus his efforts, Jake graduated with a law degree in 1903. Although his athletic and classroom activities clearly were his first priorities, Jake was no social wallflower in college. The University of Illinois yearbooks of the time contain two references to Jake’s social activities, including a poem describing his carriage ride with a young woman named Clara. Jake met his future wife, Jennie Mahan, at the university.

In the spring of 1903, as Boston suffered a potentially debilitating blow to their pennant hopes with the injury of their backup catcher “Duke” Farrell, team owner Henry Killilea hurriedly traveled to Chicago to sign Jake to an American League contract on the playing field immediately after a late-season university ballgame. Jake got into his first game on Opening Day and appeared in 40 games as a catcher for Boston in 1903, hitting .239. More importantly, Jake’s work enabled Boston to keep Criger fresh for the postseason. As noted, Jake himself did not play in the 1903 World Series. When pinch-hitting opportunities arose in both Games One and Four, Jimmy Collins twice used the still-recovering Farrell (who had played in only 17 games the entire season) and the veteran outfielder Jack O’Brien (who hit .210 in 1903). Jake’s personal disappointment was a key factor that helped shape the rest of his professional baseball career.

With Farrell fully recovered, Boston no longer needed Jake as a backup catcher. Ban Johnson, however, grateful for Jake’s role in Boston’s successful 1903 season (Boston’s World Series victory ensured the long-term viability of his new American League), envisioned Jake achieving long-term baseball success as first baseman. During the winter of 1903-04, Boston shipped Jake to the floundering Washington franchise. Johnson was in charge of the team until suitable owners could be found and converted Jake into a first baseman. He appeared in 142 games and finished the year with a .262 batting average, three home runs, and 50 RBIs. Even by Deadfall Era standards, these numbers were not exceptional, yet Stahl led the woeful (38-113) Nationals in all three categories.

In 1905, Johnson promoted Jake to manager. Having just turned 26 years old the day before the season began, he became the youngest player-manager in American League history. Employing the inclusive management style he used in college, Jake quickly won the support of the team’s veteran players. Coupled with a focused disciplinary approach emphasizing direct out-of-public-view communication with offenders, punctuated by demonstrations of potential physical force, Jake led the 1905 squad to 64-87 record. For a short time early in the season, Jake even had the team in first place. When the team returned from a successful road trip, Washington gave the team a rousing parade and celebratory dinner. More importantly, Johnson found new owners for the shaky Washington franchise. Stahl had become, in the words of one observer, “popular with the players, and so well liked by the club owners that it has been officially announced that he can retain his present berth until he voluntarily resigns.” In the offseason, Jake married his college sweetheart, the daughter of highly-successful businessman Henry Weston Mahan.

In 1906, however, things fell apart for Jake and the Nationals. Popular shortstop Joe Cassidy unexpectedly died of typhus at the beginning of the season and the team fell into a tailspin, finishing 55-95. Upset by the death of his close friend and consumed with trying to right the fast-sinking team, Jake completely lost his personal focus, finishing with the worst batting average of his career, .222. Jake took personal blame for the team’s disappointing 1907 performance, noting, “If I’d been able to hit .300 this year, as many of my friends predicted, we’d have been up in the first division, but I was a frost.”

The frustrated Washington owners replaced Jake as their manager during the 1906-1907 offseason, urging him to concentrate on playing first base. Seeing the team transition that Boston was undertaking, Jake asked to be traded back to Boston. Washington management declined, trading him instead to the Chicago White Sox. Jake refused to report and spent the 1907 season working in his father-in-law’s bank, managing the University of Indiana’s baseball team, and playing semiprofessional baseball in Chicago.

In 1908, Chicago traded Jake to Clark Griffith’s New York Highlanders. When Griffith resigned in midseason, Jake was traded back to Boston to play first base. As the future Boston stars (Joe Wood, Tris Speaker, Harry Hooper, Duffy Lewis, Larry Gardner) developed, the hard-hitting Stahl anchored the Boston lineup from 1908-1910. In 1910, Jake led the American League with 10 home runs and ranked fourth best in RBIs (77) and triples (16). He also stole 22 bases.

Despite his baseball success, Jake’s off-the-field banking successes were even greater and paid more. Given the financial uncertainties associated with a baseball career at the time and the fact that he had just started a family, Jake opted to retire. He served as vice president of the Washington Park National Bank on Chicago’s South Side. Attempts to lure him back to baseball in 1911 were fruitless.

After a change in ownership late in the disappointing 1911 season, new Red Sox team president Jimmy McAleer convinced Jake to come out of retirement. Both he and his father-in-law became part-owners of the club, Jake becoming the player-manager-owner of a talented but uninspired Boston club. Jake signed a two-year contract. Using the same inclusive management and disciplinary styles he used earlier in Washington, he effectively focused the previously-uninspired team. Boston ran away with the 1912 American League pennant. Jake finished the year with a career-high .301 batting average. Facing the New York Giants in the 1912 World Series, Jake both outplayed the Giants’ Fred Merkle at first base, and, according to Connie Mack, consistently out-managed John McGraw. Jake invested his winning World Series share in his father-in-law’s Chicago banks.

In 1913, Boston started slowly and Jake suffered a serious foot injury requiring the removal of part of a bone in his right foot. Although he continued to manage the team, he could not play first base. Within a tense atmosphere of newspaper reports claiming internal dissension within the team and rumors that Jake would replace him as team president, Boston president McAleer publicly demanded that Jake return to first base.

Upset that he was being publicly portrayed in the newspapers as somehow losing control of his team, conniving for personal gain, and shirking his first-base playing duties, Jake met McAleer in Chicago during a July road trip. In the heat of the moment, the Boston president released him, paying off the remainder of his contract.

McAleer’s hasty action was immediately condemned by much of the baseball community, including Ban Johnson, who called the move “hasty and ill-advised.” Bill Carrigan, one of the players that Jake often consulted with, was named the new Boston manager. In October, Jake announced he was through with baseball. Later that offseason, as part of another Boston front office change, McAleer himself was released as president.

During his years of involvement, he put in long hours at the bank, helping it more than double its deposits in three years. But the hard work came with a heavy price: in 1920, Jake suffered a nervous breakdown and was placed in a Monrovia, California, sanitarium. Though he spent two years in California, Jake’s health gradually worsened and he contracted tuberculosis. With his wife and son at his bedside, Jake died on September 18, 1922. He was just 43 years old.