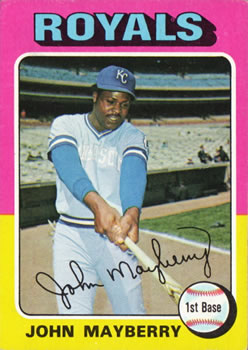 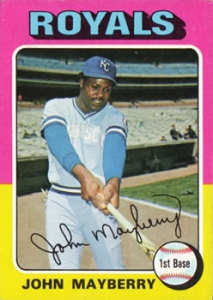 Baseball is a great family sport and father/son duos have been in the game since baseball’s early days, from George Sisler and sons Dave Sisler and Dick Sisler, to Yogi Berra and his son Dale Berra right up through the times of Ken Griffey Sr. and Ken Griffey Jr., as well as Cal Ripken Sr. and Cal Ripken Jr. and his brother Bill Ripken. Another set of names that can be added to this list is John Mayberry Sr. and his son John Mayberry Jr. The younger Mayberry followed in his father’s footsteps and played in the major leagues from May of 2009 until July of 2015.

Mayberry the elder was born on February 18, 1949, in Detroit, where he traced his roots as a youth. As a youngster he played baseball on the city’s sandlots and frequently attended Tigers games at Tiger Stadium.1 He became close with Willie Horton, who became his idol. Horton gave the youngster batting tips and gave him some bats, good ones that had not been broken.2

Mayberry and Horton also had a common bond: They both went to Northwestern High School. While at Northwestern, Mayberry starred in baseball, basketball, and football for four years. The skills he had at basketball were almost as good as his skills on the baseball diamond. Twice during his high-school basketball career he earned a place on the Detroit News all-state basketball team. But it was baseball that he enjoyed most.3

When it came to choosing a college, Mayberry went to the University of Michigan, starred for the Wolverines as a hitter and as a pitcher,4 and was drafted in the first round by the Houston Astros (sixth overall behind Ron Blomberg, Terry Hughes, Mike Garman, Jon Matlack, and Johnny Jones). He was also drafted ahead of future major-league players Ted Simmons and Bobby Grich. He had attracted the attention of teams like the Baltimore Orioles, Chicago Cubs, New York Mets, and the Tigers.5

Mayberry’s professional career began in 1967 with the Covington Astros of the Appalachian League in rookie ball. In 50 games for Covington, he had a .252 batting average. The 1968 season at the beginning saw Mayberry split time between the Greensboro Patriots of the Carolina League, the Cocoa Astros in the Florida State League, and then the Oklahoma City 89ers of the Pacific Coast League. He moved from Single-A ball with Greensboro to Triple-A ball with Oklahoma City before being called up by the Astros. He made his major-league debut for Houston on September 10 in a game against the Cincinnati Reds. Mayberry went 0-for-4 in the game, including a strikeout. He had nine at-bats in 1968 with the Astros and did not record a hit.

Mayberry began 1969 with the Astros in the Florida Instructional league before being recalled by Houston in September. He had four at-bats with Houston in 1969 but still had not gotten his first major-league hit.

April of 1970 began with Mayberry on the Astros. Finally, on April 9 in a game against the San Francisco Giants he got his first major-league hit, a single in the fifth inning off Frank Reberger. Mayberry’s first multihit game in the major leagues came on April 15, again versus the Giants, at the Houston Astrodome. In the third inning he hit a solo home run off Gaylord Perry that put the Giants ahead 2-1. In the eighth inning Mayberry came to bat with Denis Menke on first and Joe Pepitone on second, both having hit singles. Mayberry got his second hit of the day and second career home run off Perry and this tied the score, 6-6. Houston ended up winning the game on Jim Beauchamp’s single that scored Mayberry, who had been hit by a pitch to lead off the bottom of the 10th. After a stint with Oklahoma City, he returned to the Astros in August and ended up playing in 50 games for Houston and batting .216.

In December of 1971 Mayberry and minor leaguer David Grangaard were traded to the Kansas City Royals for Lance Clemons and Jim York.

For the next six years Mayberry remained with the Royals, hitting 25 home runs and driving in 100 runs in 1972; 26 home runs and 100 RBIs in 1973; 22 home runs and 69 RBIs in 1974; and 34 home runs and 106 RBIs in 1975. He averaged .261 with 24 home runs, and 92 RBIs in his six years with Kansas City, and made the Royals a respectable club.6 Sportswriter Peter Gammons argued that Mayberry had done more than anyone else to carry the team. He may have been overtaken by the likes of Reggie Jackson (Athletics), Dick Allen (White Sox), and Sparky Lyle and Bobby Murcer of the Yankees for second-half performances, but halfway through the 1973 season, Mayberry seemed most deserving of the MVP Award.

On May 24, 1974, Mayberry hit a home run, and then was ejected after he slugged Chicago pitcher Stan Bahnsen in a free-for-all during a 4-2 Kansas City win over the Chicago White Sox.7 Mayberry’s ninth home run of the season came with no one on base in the second inning. Then in the third inning Bahnsen hit Mayberry below the knee with his first pitch. The big slugger dropped his bat and charged the mound, swinging at Bahnsen with both hands.

July 1, 1975, saw the Royals facing the Texas Rangers. Starting for Kansas City was Steve Busby and for Texas it was future Hall of Famer Ferguson Jenkins. Texas had a 2-0 lead after the third inning when Mayberry came to bat with one out in the fourth. Jenkins had struck Mayberry out to end the first inning but then things got a lot better for the big first baseman as he hit an 0-and-2 pitch from Jenkins to right-center field to make the score 2-1 Texas.

Mayberry led off the seventh inning with Texas ahead 5-1 and Jenkins still on the mound. He hit Jenkins’ first pitch for his second home run of the game. Mayberry came to bat for the fourth time in the game with one out in the ninth inning. On a 1-and-0 pitch Mayberry went deep for the third time— another solo home run, making the score 5-3. Kansas City sent Harmon Killebrew to bat next and he too hit a 1-and-0 pitch off Jenkins for a home run to make the score 5-4 Texas.

Despite the champagne performance, there was a vinegary aftertaste for Mayberry.8 The first baseman for the Kansas City Royals had had the finest hour of his major-league career, unloading three home runs off one of baseball’s top pitchers. His awesome performance was a bit tainted, however, as his error allowed Texas to score what proved to be the winning run in the 5-4 Rangers victory.

Mayberry’s three dingers brought his season total to 12 and he finished the season with a career-high 34 home runs. It was a good year for Mayberry as he also hit .291 in 156 games.

After a 6-3 win over the Detroit Tigers on June 9, 1976, Royals manager Whitey Herzog smiled and Ralph Houk, the Tigers skipper, shrugged it off. The subject was Mayberry’s two-run home run, which helped Kansas City to the win. “I don’t know what I am doing, I’m just swinging,” said Mayberry, who hit only his fourth and fifth home runs of the year.9 ”I hit a couple of breaking pitches. I went out there looking for them. They’ve been giving me trouble and I really haven’t hit them all year.” Slow starts were not new for Mayberry: During the first three months of 1975, he had just nine home runs and 35 RBIs, before exploding for 12 home runs and 32 RBIs in July.

Mayberry’s batting average dipped to .232 in 1976 while his home-run total plunged from 34 to 13. He played in a league-leading 161 games as the Royals finished in first place in the American League West and earned a shot at the American League pennant. However, the Royals lost to the New York Yankees three games to two on Chris Chambliss’s home run in the ninth inning off Mark Littell.

This was a time of prosperity for the Royals as they began a string of solid finishes in the American League West highlighted by a World Series trophy in 1985. During his career Mayberry played in nine postseason games for the Royals getting just six hits in 30 at-bats for a .200 batting average.

The 1977 season was gratifying for both the Royals and Mayberry; the Royals again won the West Division and Mayberry’s home runs rose from 13 in 1976 to 23 in ’77, although his batting average dropped a couple points from .232 to .230. On August 8, 1977, Mayberry and his girlfriend, Janice, were married in Jackson, Michigan.10 (Future major leaguer John C. Mayberry Jr. was born on December 21, 1983, in Kansas City.)

On June 1, 1977, Mayberry had another three-home run game, with five runs batted in during an 11-3 rout of the Blue Jays at Toronto’s Exhibition Stadium. Two months later, on August 5, Mayberry became the second Royals player to hit for the cycle. (Freddie Patek was the first.) Facing White Sox right-hander Chris Knapp, at Royals Stadium, Mayberry singled to left field in the second inning. He led off the third inning with a home run off reliever Bart Johnson as the Royals built up an 8-1 lead.

Mayberry was no speed demon on the basepaths, with just 20 stolen bases and 19 triples in his career, but in the fourth inning he tripled to right field off Johnson. He grounded out in the sixth. The Royals led 11-2 when Mayberry stepped into the batter’s box in the eighth inning. Al Cowens had hit a one-out single off the third White Sox pitcher, Don Kirkwood. Mayberry doubled to score Cowens with the 12th Kansas City run, and this completed the cycle for the Royals first baseman. Kansas City won the game, 12-2.

After the All-Star Game the Royals went 51-22 to win their second straight American League West title. They lost to the Yankees in the ALCS, three games to two.

In April of 1978 Mayberry’s contract was sold to the Toronto Blue Jays in a cash deal. Toronto was still in the growing phase, having entered the American League in 1977 and in Mayberry’s four-plus years with the Blue Jays he averaged 18 home runs and 54 runs batted in.

Royals general manager Joe Burke said Mayberry, who was in a slump, had fallen out of grace during the 1977 American League playoffs (he went 2-for-12, .167).11 In Game Four against the Yankees, the usually slick-fielding Mayberry dropped a pop foul and fumbled a throw at the bag. Before being benched for John Wathan in the top of the fifth, he struck out twice, leading off the second inning, then in the third inning with runners on first and third.

Mayberry’s best day in a Blue Jays uniform came on Opening Day in 1980, against the Seattle Mariners at the Kingdome in Seattle. Though the Mariners won, 8-6, Mayberry was 4-for-5 with two home runs and three RBIs.

Mayberry was traded by the Blue Jays to the Yankees on May 5, 1982, for minor-leaguer Jeff Reynolds and Tom Dodd and Dave Revering. His best game as a Yankee occurred on May 8, 1982, in the Kingdome in a 9-4 Yankees win. Mayberry went 2-for-3 with a home run and three runs scored.

Mayberry retired after the 1982 season and for a while was a minor-league coach for the Blue Jays. He also spent a couple of years as a coach with the Royals and worked in the club’s community affairs office. In 1996 he was elected to the Royals Hall of Fame.

The Mayberry family was not done with baseball. John Jr. debuted in the major leagues with the Philadelphia Phillies on May 23, 2009. He spent 2009 through the 2013 with Philadelphia and then ended up splitting the 2014 season with the Phillies and the Blue Jays. He ended his major-league career with the New York Mets, playing his last game in the major leagues on July 24, 2015.