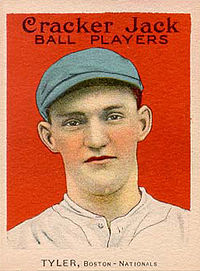 Lefty Tyler was the third of the Miracle Braves’ Big Three, and the only one who didn’t win a 1914 World Series game (though the Braves won his only start). During the astonishing run from last to first, Tyler was, according to sportswriter Tom Meany, “untouchable when he had to be, which was most of the time.” He was especially known for his grit in low-scoring games – 30 of his 127 major-league victories were shutouts, ten of them 1-0 squeakers. Also known for his great “slowball” (changeup), Tyler employed an overhand crossfire delivery (until 1940 pitchers weren’t required to make their first step within the width of the pitcher’s plate). His unorthodox style allowed him to hide the ball longer, making his fastball more effective and aiding his sweeping curve.

The second of John F. and Martha Jane (McCannon) Tyler’s four sons, George Albert Tyler was born on December 14, 1889, in Derry, New Hampshire. His father worked in the local shoe shops. All four Tyler boys starred for the local town team, the Derry Athletic Association. Arthur (1887-1932) was in the insurance business and was the only one who didn’t play professionally. Fred (1891-1945) was a longtime minor leaguer who joined Lefty on the Braves for the final days of the 1914 season. Bill (1895-1967) followed Lefty as the ace of the Derry Athletic Association and pitched in the low minors.

Lefty Tyler became prominent in local circles by 1906 by pitching for various sandlot teams as well as St. Anselm College in nearby Goffstown, New Hampshire. The following year, Lefty, Arthur, and Fred joined the Derry Athletic Association with Lefty pitching nearly every game, Fred as his batterymate, and Arthur manning third base.

In 1909 Tyler ran off a string of 34 consecutive shutout innings for the Derry Athletic Association, including a 17-strikeout game. Those feats attracted the attention of former major-league pitcher Alexander Ferson, who recommended him to Lowell of the New England League. Tyler made his professional debut with Lowell on July 2, 1909, leaving in the fifth inning with a deficit but escaping with a no-decision. He went on to post a 5-5 record, splitting his time between starting and relieving.

A 19-16 record with fourth-place Lowell in 1910 earned Tyler a late-season look with the cellar-dwelling Boston Nationals, who purchased his contract on August 26, though Tyler initially held out. It was his understanding that Bill Cunningham of the New Bedford club had received part of his sale price to the Washington Senators. Upon hearing of his sale to Boston, Tyler approached Lowell club manager James Gray for a similar deal. Satisfied that Lowell would square up with him, Tyler reported to Boston and made two relief appearances without a decision.

After being named Boston manager for 1911, Fred Tenney learned of Tyler’s dissatisfaction (he had received none of the sale money from Lowell). Tenney contacted Lowell on Tyler’s behalf. Gray offered $100, while Tyler wanted $200. (His monthly salary had been $125.) When Tyler offered to split the difference, the Lowell club directors met and decided to rescind their offer, claiming that Cunningham had not received any purchase money from New Bedford.

Despite his dissatisfaction over the Lowell matter, Tyler pitched well enough to break spring-training camp with Boston. He was originally slated to be sent to the Southern League for seasoning, but the pitching staff was too thin for him to be farmed out. With Rube Waddell toiling in the minors, Tyler was the only big-league pitcher using the overhand crossfire delivery. With last-place clubs behind him, Tyler went 7-10 with a 5.06 earned-run average in 1911 and 12-22 with a 4.18 ERA in 1912, leading the majors in losses during the latter season.

Things started to change for Tyler in 1913. Off the field, he married Lillian McCarthy of Lowell on January 29. He also made Lowell his permanent residence and would reside there for the remaining 40 years of his life. On the field, he led the National League with 28 complete games while lowering his ERA to 2.79 and posting a 16-17 record for new Braves manager George Stallings.

Tyler went 16-13 with a 2.69 ERA during the great 1914 season, putting together a string of 27 consecutive shutout innings during the second-half stretch run. In the final week, his brother Fred was recalled from Jersey City. Many sources erroneously include the Tylers on lists of major-league brother batteries; Lefty’s final regular-season appearance came on October 2, but Fred didn’t make his major-league debut until the following day. To rest catchers Hank Gowdy and Bert Whaling for the World Series, Stallings had Fred Tyler catch both games of three consecutive season-ending doubleheaders, the full extent of his major-league career. Lefty started Game Three of the World Series sweep. He was lifted in the bottom of the tenth inning for a pinch-hitter with his team down 4-3. The Braves tied the game and later won it in the 12th.

Tyler’s fine 1916 season of 17-9 with a 2.02 ERA and twice as many strikeouts as walks was sandwiched by seasons of finishing just over .500 with near equal walk/strikeout ratios and ERAs at or above the league average. In 1916 he ended the Giants’ record winning streak at 26 when he beat them, 8-3, on September 30.

On January 4, 1918, former Braves coach Fred Mitchell, then managing the Chicago Cubs, acquired Tyler in exchange for second baseman Larry Doyle, catcher Art Wilson, and $15,000. It was a steep price to pay, but Lefty made the trade worthwhile by posting the best season of his career, going 19-8 with a 2.00 ERA. On July 17 he tied the existing National League record by pitching 21 innings to beat the Phillies, 2-1. The war-shortened season likely cost Tyler his only 20-win year, but the Cubs took the pennant.

In the 1918 World Series, Mitchell started only left-handed pitchers (Tyler and Hippo Vaughn each started three games) to keep Babe Ruth out of the Red Sox lineup when he wasn’t pitching. Tyler won Game Two, 3-1, on a complete-game six-hitter, helping himself with a two-run single. He left Game Four for a pinch-hitter with the Cubs down 2-0 in the eighth inning. Chicago tied the game but Boston scored in the bottom of the inning and held on for a win. With the Cubs down three games to two, Tyler lost a 2-1 heartbreaker in the deciding sixth game. Both Boston runs were unearned.

Tyler noticed soreness in his shoulder during spring training in 1919. He insisted on pitching through the pain and took a no-hitter into the seventh inning against St. Louis in his first start before finishing with a complete-game, four-hit win. In his next start, on May 2, he beat Pittsburgh, 4-2, but pain forced him from the game. Current rules would not have allowed him to receive the win as he left the game after 4⅓ innings. After this game, Tyler admitted that his arm had not improved. Mitchell rested him until May 16, when he tossed a complete-game five-hitter in a losing cause against the Giants. He appeared four days later in relief but couldn’t complete the inning. After a month’s rest, Tyler allowed six hits and three walks in a complete-game 2-0 loss to Cincinnati on June 24. He started on June 28, but left the game after allowing a hit and a walk. It was his last appearance of the 1919 season.

Tyler was diagnosed with neuritis and it was believed he was finished as a pitcher. Hopeful that his career could be saved, the Cubs sent the 29-year-old to the Mayo Clinic in Rochester, Minnesota, for a thorough examination. He was declared to be in perfect health except for very bad teeth. All but three teeth were extracted, and Tyler rested up for the 1920 season.

Returning to the Cubs in 1920, Tyler posted an 11-12 record and was released the next season after going 3-2 in ten games. He finished the 1921 season pitching eight games with Rochester of the International League, going 4-1 but with a 5.01 ERA. The Braves signed Tyler in February 1922, but he never pitched again in the majors. He played for various semipro clubs before becoming player-manager of Lawrence of the New England League in 1926; he was 3-3 in eight games as a pitcher and batted .280 in 72 games as a first baseman as Lawrence finished in fifth place in the eight-team league.

After his playing days, Tyler umpired from 1928 to 1930 in the New England League and in 1931 and ’32 in the Eastern League. He worked for the New England Power Company for a time, then as a shoe cutter in the mills around Lowell.

Tyler was greatly affected the remainder of his life by the death of older brother Arthur, whose body was found the morning of December 2, 1932. Arthur had driven his vehicle onto the Derry Athletic Association ball field during the night and shot himself. Tyler suffered another setback when he received notice in October 1943 that his son, George A. Tyler Jr., a Flying Fortress pilot, was shot down and imprisoned in a German POW camp. This incident had a happy ending when the younger Tyler was released after several months in captivity.

Tyler died suddenly at his home of a heart attack on September 29, 1953 – exactly 39 years from the day that the Miracle Braves clinched the pennant. He left two children, George Jr. and his daughter, Jean. He is buried in Lowell’s St. Patrick Cemetery.

For this biography, the author used a number of contemporary sources, especially those found in the subject’s player file at the National Baseball Hall of Fame Library. Among the sources consulted were:

Notes from the Tom Shea collection, courtesy of Dick Thompson.