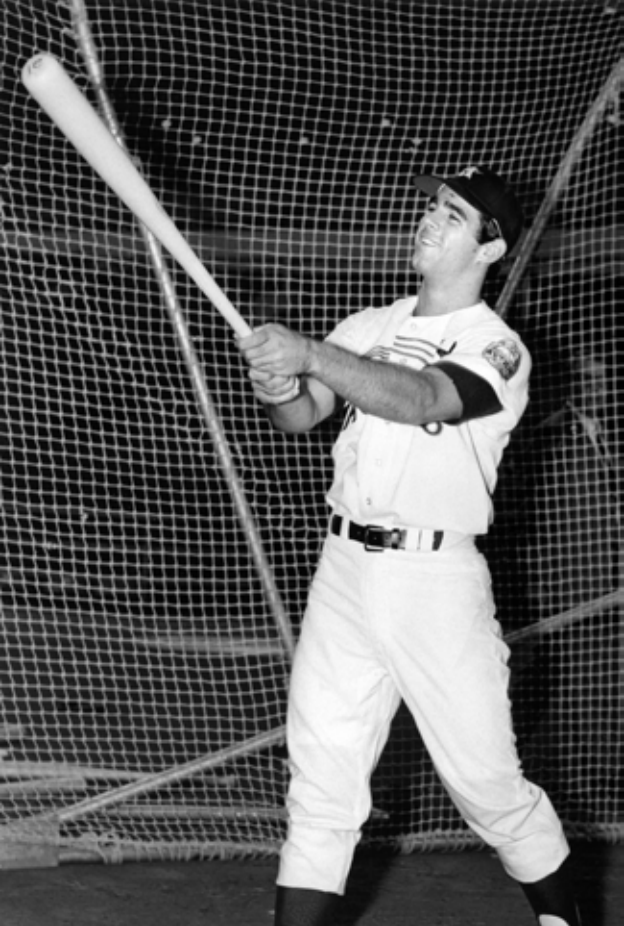 “WE HOPE YOU’RE ENJOYING TONIGHT’S THIRD GAME AS MUCH AS YOU DID THE FIRST TWO.” — Message on the Astrodome scoreboard at the top of the 20th inning.

It was the game that would not end. It was a game of formidable pitching and feeble hitting. It was the Year of the Pitcher in a 24-inning nutshell.

It was also, at the time, the longest night game — and the longest scoreless contest — in the major leagues.

With two young flamethrowers, Tom Seaver and Don Wilson, going head to head, the 14,219 paying fans and 5,000 Boy Scouts admitted free that night at the Astrodome might have anticipated an exciting pitching duel. What they got was an epic contest of endurance that would not be decided until the early hours of the following day.

Through nine innings the score stood tied at 0-0. Wilson had allowed just five hits and three walks in a breezy outing, the Mets bringing more than four batters to the plate in an inning only three times, with no runner advancing past second base.

Seaver, for his part, had been nearly unhittable, with Hal King’s double in the second inning the only Houston baserunner through nine innings. King had advanced to third on a wild pitch, only to be gunned down at the plate as he attempted to score on a groundball. No one would come that close to scoring a run for the next 21 innings.

Seaver returned to the mound for the 10th inning, running a string of consecutive Astros retired to 25 before Rusty Staub stroked a single to right field. Staub was left stranded when King grounded to first baseman Ed Kranepool, who tossed to shortstop Al Weis for the force at second to end the inning.

“My arm was still lively in the 10th inning but there was no use in straining it,” said Seaver, acknowledging Mets manager Gil Hodges’ prudence in removing his young ace.1

Scoring opportunities continued to be few as the game was turned over to the bullpens. Seaver was replaced by Ron Taylor, who gave way to Cal Koonce, Bill Short, Dick Selma, and Al Jackson. John Buzhardt and Danny Coombs picked up where Wilson left off, hanging up zeros on the scoreboard.

Both teams mounted threats in the extra innings, several times getting runners to third, but each time to no avail. In the 12th inning the Mets got singles by Jerry Grote, Weis, and Ken Boswell, but Tommie Agee grounded out to end the inning. The Mets put runners on third in the 17th and 19th innings, while the Astros stranded a runner there in the 22nd. The marathon of futility and frustration continued.

The score remained 0-0 as Monday night turned into Tuesday morning. In the absence of sufficient entertainment on the field, the Astrodome’s Fan-O-Gram scoreboard operators began to inject a little humor between the balls and strikes. “After about the 17th inning,” observed Rusty Staub, “everything sort of got funny.”2

As fans began a steady exodus from the Astrodome following the shutting down of beer sales at midnight in compliance with Texas law, the scoreboard cracked, “I TOLD YOU BASEBALL WOULDN’T REPLACE SEX.”3

A disputed out at first on a grounder to third by Bob Aspromonte in the Astros’ 18th brought boos from the remaining faithful in the stands and a lament from the scoreboard: “I’M GOING TO THROW UP.”4

“WE HOPE YOU’RE ENJOYING TONIGHT’S THIRD GAME AS MUCH AS YOU DID THE FIRST TWO,” quipped the scoreboard as the game entered its 20th inning. “FOR THOSE OF YOU STILL HERE … YOU ARE WITNESSING THE LONGEST 0-0 NIGHT GAME IN MAJOR LEAGUE HISTORY.”5

An inning later the scoreboard got the bleary-eyed audience on its feet for a “21st INNING STRETCH.”6

Astros rookie fireballer Jim Ray, after entering the game in the 14th inning, pitched a remarkable seven innings of scoreless relief, yielding but two hits and one walk and fanning 11. Wade Blasingame, picking up where Ray left off, faced the minimum in the 21st, 23rd, and 24th innings, running into trouble only in the 22nd, when he allowed Grote to reach second on a single and a sacrifice by pitcher Don Cardwell, a career .135 hitter pressed into service as a pinch-hitter for Danny Frisella, who was removed after hurling five scoreless innings.

“THE JUDGE [Astros’ owner Roy Hofheinz, who had an apartment in the Astrodome] SAYS HE’S READY TO GO TO BED … LET’S SCORE A RUN,” implored the scoreboard in the bottom of the 22nd as rookie Les Rohr became the eighth Mets pitcher.7

Rohr, held back until now by Hodges after having pitched 25 minutes of batting practice before the game, was uneven as he walked two (one intentionally) and uncorked a wild pitch before striking out Julio Gotay with Staub on third to retire the side.

As the 23rd inning began, Houston team officials announced that they would provide free breakfast for the press.

The deadlock was finally broken in the bottom of the 24th inning. Norm Miller led off with a single to right. Rohr then balked when he accidentally “broke his hands” from the set position, moving Miller to second.8 Jim Wynn was walked intentionally, putting runners on first and second. A groundout to second by Staub moved the runners to second and third and Rohr walked John Bateman intentionally to load the bases, bringing Aspromonte to the plate.

“The bat felt like eight and a half pounds when I carried it to the plate,” the veteran Astro recalled.9 Aspromonte slapped a grounder to the left of second base, directly at Weis.

“It might have been a double-play grounder ending the threat and putting everybody into the 25th inning,” wrote Joseph Durso of the New York Times. “But the ball skidded off the chemical carpet known as the Astroturf and went right through Weis’ legs into left field while Miller scored the only run of the night.”10

“I hoped he was going for the double play,” said Hodges. “It looked like it hit the edge of the turf and skidded. I think he touched it.”11

Miller was mobbed by his teammates as the estimated 3,000 stalwart souls who remained to the end of the 6-hour 6-minute marathon erupted along with the Astrodome’s exploding scoreboard.

The game tied the major-league mark for the longest game ever played to a decision, matching a 24-inning, 4-1 Philadelphia Athletics victory over the Boston Americans on September 1, 1906. The longest game, 26 innings, had been played on May 1, 1920, when the Boston Braves and Brooklyn Robins battled to a 1-1 tie.

In the years since the Astrodome marathon, there have been longer games, but none (as of 2015) to challenge the 23 innings of scoreless ball played from the outset by the Mets and Astros that night in 1968. The St. Louis Cardinals beat the Mets, 4-3, in a 25-inning game on September 11, 1974, and the Chicago White Sox topped the Milwaukee Brewers, 7-6, in 25 innings in a game suspended in the 18th inning on May 8, 1984, and completed the following day.

Wade Blasingame picked up the win for Houston, pitching four scoreless innings while allowing one hit and one walk. It was his only win that season, one of 17 he accumulated in six seasons with the Astros. Rohr took the hard-luck loss. Both King and Grote, remarkably, caught all 24 innings.

As for the batters, Astros skipper Grady Hatton put it best when he said, “There were some pretty sick-sounding bats in this game.”13 Agee and Ron Swoboda, batting third and fourth, respectively, for the Mets, went a combined 0-for-20 with nine strikeouts. Aspromonte, despite driving in the winning run, was hitless in nine at-bats.

It was a long night for one other Astro who wasn’t even at the game. Pitcher Tom Dukes had been recalled from Triple-A Oklahoma City before the game when Houston put Mike Cuellar on the disabled list. Dukes was told to arrive in Houston the next day, so with his 89ers playing in Nashville, he packed his bags and spent the day driving from Tennessee to Dallas, Texas. Listening to the radio broadcast of the game in a hotel, Dukes decided he might be needed and tossed his bags back in the car to continue to Houston. He was less than an hour’s drive from the Astrodome when Miller gleefully pounced on the plate to end the game.

Norm Miller debuted with the Astros at the age of 19 on September 11, 1965. He scored the winning running in Houston’s marathon 24-inning, 1-0 victory over the New York Mets on April 15, 1968. (Courtesy of Houston Astros Baseball Club).

6  Joe Dittmar. Baseball Records Registry: The Best and Worst Single-Day Performances and the Stories Behind Them (Jefferson, North Carolina: McFarland and Company, 1997), 12.