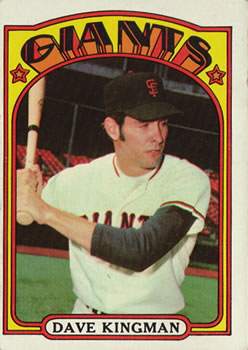 April 16, 1972, was a big day for history in Houston. At the Manned Spacecraft Center (later renamed the Johnson Space Center), flight controllers watched as Apollo 16 blasted off with the next-to-last lunar mission of the decade. Across town at the ballpark, San Francisco’s Dave Kingman, playing in his first full season in the major leagues,1 blasted his first four hits of the 1972 campaign and they just happened to earn him a cycle. His hitting display helped the Giants beat the Astros 10-6 before a small Astrodome crowd of 10,778. Coincidentally, Kingman’s batting feat occurred the same day that Chicago Cubs rookie pitcher Burt Hooton tossed a no-hitter against the Philadelphia Phillies.

Sam McDowell made his first National League start for the Giants, who had acquired him from Cleveland in the winter. The six-time All-Star had won 122 games (against 109 losses) with the Indians in 10 full seasons, posting a career ERA of 2.99. He was opposed on the mound by Dave Roberts, who had been traded to Houston from San Diego in the offseason. Roberts’ career ERA was also 2.99, with a record of 22-34.

The home team scored when Bob Watson hit a three-run home run in the bottom of the first after a walk to Roger Metzger and a single by Cesar Cedeno. San Francisco answered in the top of the second. Bobby Bonds hit a one-out double to right and scored on Kingman’s single into center field. Roberts made an error fielding a grounder by Fran Healy, allowing Kingman to advance to second. Two batters later, when McDowell singled up the middle, Kingman scored the Giants’ second run.

In the San Francisco fourth Bonds led off with his second double. Kingman followed with a triple to center. Bob Stevens of the San Francisco Chronicle described it as a “bad-hop, check-swing triple over center fielder Cesar Cedeno.”2 Healy singled and the Giants now had the lead. After two outs, Willie Mays walked. When Tito Fuentes doubled to left, driving in Healy, Houston manager Harry Walker lifted Roberts for Jim Ray. Ray struck out Ken Henderson, but the ball got away from Houston catcher Jack Hiatt, allowing Mays to score the Giants’ sixth run, Fuentes to trot to third, and Henderson to reach first. Ray then struck out Willie McCovey looking. The Giants had batted around.

Bonds introduced the fifth inning with a single and stole second base. Kingman scorched a double to center, and Bonds scored easily. San Francisco now led 7-3. Houston pulled to within one run, 7-6, in the bottom of the sixth when McDowell’s control slipped away. Two one-out singles by Lee May and Watson started a rally. McDowell threw a wild pitch, advancing both runners. After Doug Rader struck out, Tommy Helms deposited a McDowell offering beyond the fence. McDowell then walked Hiatt, and his day was finished. Skipper Charlie Fox called to the San Francisco bullpen for Don McMahon. Afterward, McDowell described the pitch. “I threw him a slider, right down the pipe and I deserved what happened.”3

The Giants answered right back in the seventh. With Wade Blasingame now pitching for Houston, McCovey doubled and Bonds was hit by a pitch. Kingman sent a towering home run into the stands in left. His blast, measured at 420 feet,4 restored the Giants’ four-run advantage. He had just completed hitting for the cycle. After the game Kingman described the blast, saying, “I was concentrating so much on keeping my head down and leveling off my swing, I never saw the home run go into the seats.”5 That was the end of the scoring and the Giants won the game, 10-6.

When Kingman came into the dugout after his round-tripper, he was mobbed by his teammates. On-deck batter Chris Speier congratulated him on accomplishing the cycle, and Kingman said, “I didn’t know what he meant by cycle. I’d never heard that term before.”6 Speier would later hit for the cycle on July 20, 1978, while playing for the Montreal Expos, and then again on July 9, 1988, as a San Francisco Giants player.

For the Giants, Bonds joined Kingman in a good day of offense. He was 3-for-3 with two doubles, a single, a walk and a hit-by-pitch. Four of the five times Bonds got on base, Kingman knocked him in. Bonds and Kingman collected seven of the 11 San Francisco hits. Sam McDowell earned his first victory in the National League, despite allowing six earned runs in 5⅔ innings pitched. He struck out four but walked two and gave up the two three-run homers. Before the game, the left-hander was wished luck, and told reporters, “My philosophy is I don’t need luck; I need runs and a strong defense.”7 He got both, but Kingman’s cycle was lucky as well. Kingman admitted to getting some help with balls bouncing over outfielders’ heads, saying, “I am glad it was in the Astrodome. They might not have got through in some other park.”8 This was also the first cycle in the eight-year history of the Astrodome.9

Houston’s Bob Watson had three hits in four trips to the plate. He scored two runs and drove in three, all in a losing cause. Helms had a 1-for-3 day with his home run. Roberts took the loss, working only 3⅔ innings, but six days later he beat the Giants in a nine-inning complete game shutout.

Kingman’s cycle and Hooton’s no-hitter marked only the second time since 1901 that a batter hit for the cycle on the same day that a pitcher threw a no-hitter. There have been three such occurrences; the other two were on April 29, 1922, and August 9, 1976.10 Hooton’s no-hitter was the first by a rookie in the National League since 1912 (by New York Giants pitcher Jeff Tesreau).

Kingman, selected by San Francisco as the first overall pick in the 1970 amateur draft, was the Giants’ 6-foot-6 third baseman. He had six runs batted in. San Francisco left six men on base. Willie McCovey made six putouts at first base. Houston’s starter, Dave Roberts, allowed six runs, and the Astros scored six runs on six hits. Kingman had been drafted as a first baseman-outfielder, but with McCovey at first, Kingman played the hot corner. His manager, Fox, told reporters, “A bat like that, you have to get it in the lineup somewhere.”11  Especially when it leads to a cycle in the second game of the season. Kingman’s was the first of four cycles in the majors in 1972, along with Cesar Cedeno (August 2), Bobby Murcer (August 29), and César Tovar (September 19). There were also three no-hitters: Burt Hooton (April 16), Milt Pappas (September 2), and Bill Stoneman (October 2).

In addition to the sources mentioned in the Notes, the author consulted baseball-reference.com, mlb.com, and retrosheet.org. The author sincerely thanks the Magazine and Newspapers Center of the San Francisco Public Library for assistance with sources.

1 Kingman “exceeded rookie limits during 1972 season,” according to baseball-reference.com. Even though he played in only 41 games and had 115 at-bats in 1971, he was with the Giants for 62 days, more than the allowable 45-day rookie limit.

10 On April 29, 1922, Chicago White Sox pitcher Charlie Robertson pitched a perfect game against the Detroit Tigers and New York Giants future Hall of Famer Ross Youngs hit for the cycle against the Philadelphia Phillies. On August 9, 1976, Pittsburgh Pirates pitcher John Candelaria threw a no-hitter against the Los Angeles Dodgers, and Houston Astros batter Cesar Cedeno hit for the cycle (for the second time in his career) against the St. Louis Cardinals.