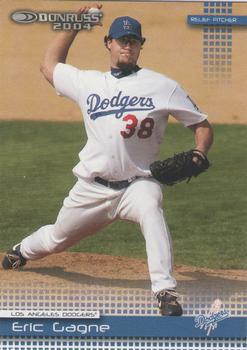 It was a sight many in Los Angeles were used to, one with an expected outcome. It was the ninth inning, and the Dodgers were in the lead. Manager Jim Tracy knew whom to call to end this game, as he had done many times before. Just like the decision, he was automatic.

But today was different. This time, his closer got to face his equal: A man feared by fans, players, and managers alike. The unmovable object faced the unstoppable force, a battle foreshadowed two years and thousands of miles away. Eric Gagné would face Barry Bonds.

In April 2004, the 28-year-old Gagné was on a historic run. On August 26, 2002, during his first season as Dodgers closer, he blew a save against the Arizona Diamondbacks. More than a season and 65 saves later, he had not blown a save since.

Gagné converted all 55 of his save opportunities in 2003, leading the major leagues and finishing just two saves short of what was then the major-league record,1 set by Bobby Thigpen of the Chicago White Sox in 1990.2 By the end of 2003, Gagné held another relief record: the longest save streak of all time, breaking Tom Gordon’s mark of 54 straight games set in the 1998-1999 seasons.3 He won the 2003 Cy Young Award, making him, as of 2021, the last reliever to win the award.4

In 2002 Gagné took part in the biannual MLB-Japan All-Star Series, along with fellow star Bonds of the San Francisco Giants. Gagné would later say, “Of all the players who were going to be part of this team, Barry Bonds was the one I was most looking forward to meeting.”5 It was no wonder: In many ways, Gagné and Bonds were matched in excellence.

If Gagné was unhittable in 2003, then Bonds was unpitchable in the 2000s. Bonds entered 2004 on a three-year National League MVP streak, with 2003 being the sixth win of his career. He had broken the all-time single-season home-run record with 73 in 2001.

On April 12, 2004, Bonds hit his 660th career home run, against Matt Kinney of the Milwaukee Brewers, tying his godfather, Willie Mays, for third on the all-time list. A day later, the 39-year-old Bonds homered off Milwaukee’s Ben Ford, leaving him alone behind only Hank Aaron and Babe Ruth among the game’s home-run leaders.6

Hall of Famer Greg Maddux – one of Bonds’ peers in longevity and dominance – described Bonds as “the easiest guy in the world to pitch to, because it didn’t matter if you just … walked him.”7

After that 2002 exhibition in Japan, Bonds complained about Gagné not giving him pitches to hit throughout the event. Gagné responded by setting a challenge, stating, “You know what, if I get a three-run lead one time and I come in, I’ll face you.” The two men agreed, with one other condition: Gagné was allowed to throw one off-speed pitch during the at-bat.8 In two meetings between Bonds and Gagné in 2003, these conditions were not met, and Gagné pitched normally.9

The April 16 battle between the Dodgers and Giants was the first between the division rivals in 2004. Giants manager Dusty Baker started Jason Schmidt, and the Dodgers struck first with some small ball. A walk to leadoff man Dave Roberts began the inning. He advanced to second on Cesar Izturis’s groundout, stole third, and scored on Milton Bradley’s groundout. Robin Ventura flied out to end the top of the first with a 1-0 Dodgers lead.

The Dodgers started Odalis Perez, who set down the Giants in order in the first. Schmidt allowed another leadoff walk in the second inning, this time to Paul Lo Duca, but followed with three straight outs from Juan Encarnacion, Adrian Beltre, and Alex Cora.

Bonds, still at 661 career homers, led off the second by popping out to Beltre at third base. Edgardo Alfonzo got San Francisco’s first hit with a two-out double, but Yorvit Torrealba grounded out to end the inning.

Bonds earned a two-out walk against Perez in the fourth, but Pedro Feliz’s strikeout ended the inning.

The two starters did not allow another hit until the bottom of the fifth, when Alfonzo doubled. Torrealba’s sacrifice moved Alfonzo to third, but Perez induced Cody Ransom to fly out and fanned Schmidt to preserve the Dodgers’ one-run lead.

Schmidt was not as fortunate in the sixth. Roberts and Izturis singled to put runners on first and third with one out. When Bradley grounded into a force at second, Roberts scored for a 2-0 Los Angeles lead.

Perez needed four outs to get through the bottom of the sixth, with Marquis Grissom’s strikeout undone by a wild pitch. A strikeout of Bonds was the final out. Schmidt allowed Lo Duca’s one-out single in the seventh but did not allow a run in what was Schmidt’s final inning of work.

Following a one-two-three seventh inning from Perez, Giants reliever Jason Christiansen retired all three batters in the top of the eighth.

Perez remained in the game for the eighth; another clean inning kept his shutout intact. Jim Brower came in to pitch for the Giants in the ninth inning. Roberts led off with a walk and advanced to second on a throwing error on a pickoff attempt by Brower. Izturis bunted Roberts to third, whence he scored on Bradley’s groundout for a 3-0 Dodgers lead.

The game entered the bottom of the ninth. Jim Tracy summoned Gagné to get the final three outs.

Gagné’s outing began with a walk to Jeffrey Hammonds. After a fly out by Grissom, everything fell into place: Barry Bonds walked to the plate. The predestined duel would take place, and unlike their 2003 matchups, the Dodgers held a three-run lead – giving Gagné enough space to challenge Bonds. Gagné had been successful against Bonds in his career, allowing just three hits and zero home runs entering this at-bat.10

Gagné began with two fastballs to Bonds, both taken for strikes. Then a curveball just missed for ball one. Gagné had used his one off-speed pitch. Bonds took a third fastball inside.

Then, after a fastball fouled back, Bonds knew another fastball was coming and pulled the 101-mph pitch foul into McCovey Cove.

Finally, on the seventh pitch – and sixth fastball – Bonds won the battle with a home run to center field. The crowd roared as Bonds completed his trip around the bases on career homer 662, cutting the Dodgers’ lead to 3-2.11

Feliz came to the plate as the tying run but lined to left field for the second out. Alfonzo grounded out to end the inning and the game.

Gagné recorded the save – his 66th in a row – despite the two earned runs. Perez earned the win with eight shutout innings, while Schmidt took the loss.

Gagné’s Dodgers finished ahead of Bonds’ Giants at the end of 2004 as well. The Dodgers came in at 93-69, winning the NL West, while the Giants finished 91-71 and lost out for the wild-card spot to the 92-win Houston Astros. The Dodgers lost the NLDS in four games to the eventual NL pennant winners, the St. Louis Cardinals.

As for Gagné and Bonds, both found themselves on similar paths after their April 2004 showdown. Gagné extended his save streak to 84 games before allowing the Arizona Diamondbacks two runs in the ninth to tie the game on July 5, 2004.12 Gagné finished seventh in the NL Cy Young voting for 2004, and 11th for NL MVP. That MVP award went to Bonds, his fourth in a row. He set several records in 2004, including the major-league mark for highest on-base percentage at .609.13

Later revelations, however, diminished their respective glories. Bonds played until 2007; Gagné, hampered by shoulder and back injuries, finished up in 2008.14 Gagné admitted to using steroids during his career in his 2012 book,15 while Bonds was one of the most prominent members of the 2003 BALCO scandal.16 Both Bonds and Gagné’s association with steroids have since taken away most of the shine behind their accomplishments.

1 Gagné’s 55 saves tied John Smoltz’s 2002 season for the second-most saves in one season in MLB history at the time.

7 Michael Cerami, “Greg Maddux Explains Why Barry Bonds Was “The Easiest Guy in the World” to Pitch Against,” Bleacher Nation. Last modified January 2, 2018.

9 This did not mean the two matchups were unremarkable; the June 23, 2003, matchup saw Bonds earn his 500th walk to become the first member of the 500-500 club. He followed that up by scoring the winning run, leaving Gagné to take the loss.

14 This home run was Bonds’ only career homer in 17 career at-bats against Gagné.