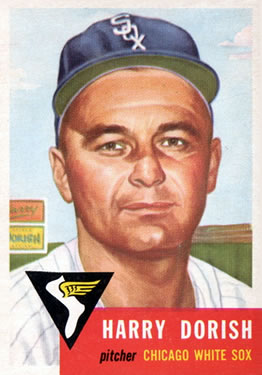 The Cleveland Indians and the Chicago White Sox were both optimistic clubs heading into the 1953 season. Cleveland had finished in second place in the American League in 1952, just two games behind the pennant-winning New York Yankees. Chicago had finished in third place, 14 games off the pace.

The White Sox’ biggest acquisition in the offseason was Ferris Fain. The left-handed-hitting first baseman was part of a five-player deal with the Philadelphia A’s on January 27, 1953. Fain was the reigning two-time AL batting champ, and he would certainly be an addition to the White Sox lineup.

Cleveland did not make a major move over the winter months. Perhaps feeling that his squad was close to the Yankees, Indians GM Hank Greenberg believed that only some tinkering was in order. The club’s biggest pickup was journeyman pitcher Bob Hooper, also from the A’s, on December 19, 1952.

The Indians traveled to Chicago for a three-game series beginning April 18 at Comiskey Park. They had met on April 14 in Cleveland for the season opener. Bob Lemon tossed a beauty. The right-handed hurler threw a one-hit shutout in the Indians’ 6-0 win. Lemon also smacked a home run, a solo shot in the fourth inning. The former third baseman-turned-outfielder-turned-pitcher showed that he still had moxie at the plate. It was the pitcher’s 27th career home run.1 The Indians (2-1) then left for Detroit, where they split a pair with the Tigers before heading to Chicago (1-2). The White Sox split a pair at home against St. Louis after their Opening Day loss.

The weather forecast did not look promising for the afternoon ballgame. Although a high of 40 degrees was forecast, light rain and snow were also in the offing with winds whipping off Lake Michigan at 15-25 MPH.2 A total of 4,915 diehard fans braved the cold weather.

The Indians scored a run in the first inning when Ray Boone led off with a walk. After Bobby Avila flied out, Larry Doby singled to right field that sent Boone to third base. Luke Easter knocked in Boone with a groundout to first base with the pitcher covering,.

The White Sox came right back with five runs in the bottom of the first inning. There were only two hits by the home team, a double by Nellie Fox and a single by Sherman Lollar. Chicago was aided by two Cleveland errors (second baseman Avila, catcher Jim Hegan), two walks, and a hit batsman. Wynn was relieved after recording only two outs and replaced by with Dave Hoskins. The right-hander retired Byrne for the final out as the White Sox batted around. Of the five runs charged to Wynn, only one was earned.

But Byrne could not keep the lead. He loaded the bases with consecutive walks to Harry Simpson, Hegan, and Hoskins. Boone singled to left to knock in two runs and Byrne walked Avila to load the bases again. The free passes ended Byrne’s day as Chicago manager Paul Richards summoned Lou Kretlow from the bullpen. Kretlow uncorked a wild pitch to score Hoskins. Two consecutive groundouts tacked on two more runs for the Indians and they now led, 6-5.

Hoskins walked three White Sox hitters in the bottom of the second inning, but Chicago could not score a run. In the third inning, both teams were retired in order.

Kretlow issued free passes to Boone and Avila to lead off the fourth inning. After Doby flied out, Easter stepped up to the plate. Kretlow threw a curve that struck the Indians’ slugger on the left foot. The result was a fracture of the large metatarsal bone.3 “Man, that Kretlow sure throws a big curve — but not that big,” said Easter. “I saw it coming tight. I stepped back. Thought I was back far enough. But it kept curving. It dropped right on my foot. Plop!”4

Bill Glynn ran for Easter and replaced him at first base. With the bases loaded, the Indians could not score. The White Sox knotted the score at 6-6 in the bottom of the inning. Fox again led off with a double to left field. Hoskins then walked Fain and Minnie Miñoso to load the bases. Indians manager Al Lopez replaced Hoskins with right-hander Ted Wilks. Richards sent up the left-handed-hitting Tom Wright to bat for Vern Stephens. Wright came through with a single to center field to score Fox. Fain tried to follow Fox across the plate, but he was thrown out on a throw by Doby. Lopez went to his bullpen again and summoned Al Aber to the hill. Miñoso tried to steal home for the go-ahead run, but he was tagged out in a rundown. With two away in the top of the fifth inning, Kretlow issued three straight walks. However, Doby struck out to end the threat. Similarly, the White Sox loaded the bases in the bottom of the seventh inning with one out, on two walks by Aber and a bobble by shortstop Boone. But Aber retired the next two batters to keep the score tied.

In the bottom of the eighth, Fain walked. Miñoso laid down a bunt. Aber fielded the ball and threw to second baseman Avila, who was covering first base. But Avila and Miñoso got tangled up on the play. An alert Fain raced on to third base. Rocky Krsnich, who had replaced Stephens, tapped a groundball to Al Rosen at third base. Fain dashed toward home and Rosen fired the ball to Hegan, who dropped it for his second error of the game. Fain scored and the White Sox led 7-6.

Chicago took its one-run advantage into the ninth inning. But the Indians, despite getting two men on base on two White Sox errors, could not score.

The winning pitcher was Fritz Dorish, who pitched the final two innings for the White Sox. Aber took the loss. Both teams’ pitchers combined to issue 26 walks (Chicago 14, Cleveland 12). The teams combined for 13 runs on only seven hits. As of the end of the 2019 season, the major league record for walks in a nine-inning game by both teams was 30, set by Detroit and Philadelphia on May 9, 1916.

Cleveland left 14 men on base, while Chicago stranded 11. The two teams were scheduled to play a doubleheader the next day, but the slate was postponed due to cold weather.

The author accessed Baseball-Reference.com and retrosheet.org for box scores, play-by-play, and other data.