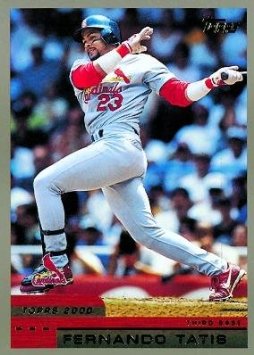 Before a crowd of 46,687 on a Friday night, the Cardinals’ Jose Jimenez squared off against the Dodgers’ Chan Ho Park. Jimenez pitched seven innings to earn his second win of the season; Park did not last three innings. However, he did pitch enough of the third inning to make history. Each team mustered 11 hits in the game, but St. Louis put together six of theirs, two walks, a hit batsman, a batter who reached on a fielder’s choice, and another batter who reached on an error — 11 baserunners — in an explosive third inning in which they scored 11 runs.

Powered by third baseman Fernando Tatis, the Cardinals sent up 14 batters in the top of the third. Tatis did something no other major leaguer has accomplished through the 2014 season. He slugged two grand slams in the same inning.

In the top of the third, the first three Cardinals (Darren Bragg, Edgar Renteria, and Mark McGwire) all reached to load the bases. Third-base coach Rene Lachemann held Bragg at third after McGwire’s bloop single to right field. On a hitter’s count, Tatis clobbered a 2-and-0 offering into the Dodgers’ left-field bullpen, giving the Cardinals an instant lead. J.D. Drew grounded to first. Eli Marrero homered to deep left field. Pinch-hitter Placido Polanco walked, as did Joe McEwing. Pitcher Jose Jimenez reached on a fielder’s choice (a sacrifice bunt that Park threw wide to third base). Bragg, Renteria, and McGwire all came up with the bases loaded, and each at-bat ended with the bases still loaded, as Bragg reached on an error, Renteria singled with Jimenez holding at third, and McGwire popped out. This set the stage again for Tatis, who rocketed a full count pitch off Park, still laboring, into the pavilion past the left-center fence. Tatis had seen nine pitches in the inning and he had knocked in eight runs. After the second grand slam, Dodger manager Davey Johnson pulled Park in favor of Carlos Perez.

Until Tatis, Mark McGwire had been the only member of the 1999 Cardinals to have hit two home runs in the same inning.1 However, McGwire had been with the Oakland Athletics at the time and only one of the home runs had been with the bases loaded. Describing Tatis’s feat, a reporter for the St. Louis Post-Dispatch wrote, “Two swings of his bat, two thunder bolts into the Southern California night.”2 McGwire made both of the grand slams possible for Tatis. In his first at-bat in the third inning, McGwire singled to load the bases; in his second at-bat, he popped out to shallow right field, keeping the bases loaded for Tatis and the history books.

St. Louis added a run in the top of the sixth when Drew hit a two-out solo home run. Jimenez was cruising through the Dodgers lineup, at one point retiring nine in a row from the fourth through the sixth. In the seventh, however, he allowed three singles and a walk, giving up two more runs. Manny Aybar came on in the eighth to pitch for the Cardinals and allowed a run on a double and two groundouts. That ended the scoring in the game. The Cardinals cruised to a 12-5 victory over the Dodgers.

Dodgers’ broadcaster Vin Scully had been behind the mike for three perfect games and Hank Aaron’s record-breaking 715th home run. After this game, Scully said, “When he came up the second time, I said, ‘I’m not even going to look in the record book because I can’t believe anybody could have ever (hit two slams in an inning),’ and then damned if he didn’t do it. What would it be comparable to? I don’t know how you could compare it to anything. One inning is so preposterous.”3

Sports Illustrated writers Tom Verducci and Jeff Pearlman noted that Dodgers pitcher Chan Ho Park had “served up both salamis to become the second pitcher after Whoa Bill Phillips to give up two slams in the same inning.”4 Phillips allowed two grand slams on August 16, 1890, pitching for the Pittsburgh Alleghenys against the Chicago Colts. Verducci and Pearlman wrote that the grand slams were Tatis’s first in the major leagues; he “walloped a 2-and-0 fast-ball 450 feet into the Dodgers’ bullpen for his first home run,” then “double-Parked with two out by driving a 3-and-2 slider into the left-field pavilion.”5

Since the American League began in 1901, only four major-league teams had hit two grand slams in the same inning, and these were by different batters.6 No St. Louis Cardinal batter had ever hit two home runs in the same inning until this game.7 In his historic feat, Fernando Tatis became the second National League player and the 10th major leaguer to hit two grand slams in one game.8 The first National Leaguer was Atlanta Braves pitcher Tony Cloninger, who accomplished the task on July 3, 1966.9 Tatis was the 20th major leaguer to homer twice in the same inning.10

Hummel, Rick, “It was a Grand Night for Tatis: Cards Third Baseman Basks in 15 Minutes of Fame After Slams,” St. Louis Post-Dispatch, April 25, 1999.

1 Rick Hummel, “It was Grand Night for Tatis; Cards Third Baseman Basks in 15 Minutes of Fame After Slams,” St. Louis Post-Dispatch, April 25, 1999. Mark McGwire had only six RBIs in the young season, but Tatis had eight after two swings in this game’s third inning.

6 Rick Hummel, “It was Grand Night for Tatis; Cards Third Baseman Basks in 15 Minutes of Fame After Slams,” St. Louis Post-Dispatch, April 25, 1999. The four previous teams to hit two grand slams in the same inning were the 1962 Minnesota Twins, the 1969 Houston Astros, the 1980 Milwaukee Brewers, and the 1986 Baltimore Orioles.