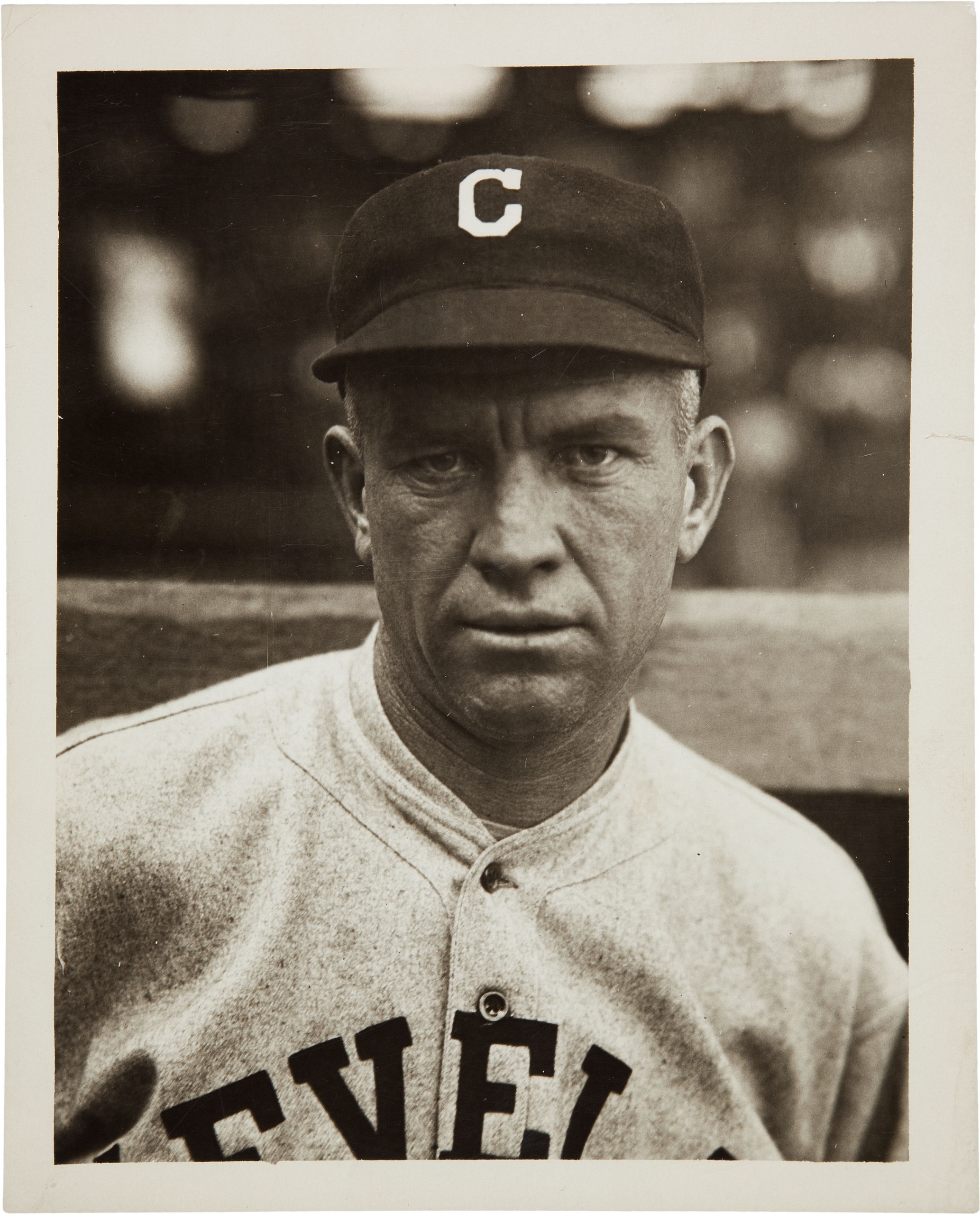 April 26, 1921, was a great day in Cleveland baseball history. The Indians raised the 1920 American League pennant, which was the Forest City’s first championship flag in 45 years of professional baseball. The celebrations were followed by a thrilling comeback win over the Tigers, featuring a tactical battle between player-managers Ty Cobb and Tris Speaker that resulted in Speaker using a record 23 players.1

The Indians had won the 1920 pennant by two games over the Chicago White Sox and three games over the New York Yankees. They went on to defeat the Brooklyn Robins five games to two in the World Series. In doing so, the Indians overcame the death of star shortstop Ray Chapman, who was struck in the head by a pitch from Carl Mays on August 16. In addition to his brilliant managing, 32-year-old Tris Speaker led the Indians in many offensive categories. The 1920 season also featured a stunning 54 home runs by Babe Ruth.

A dark cloud hung over the 1920 season, however, regarding the Chicago White Sox’ conduct in the 1919 World Series. “Through most of the 1920 baseball campaign,” wrote Franklin Lewis, “frank discussion of a fix had replaced idle rumors and facial gestures.”2 Eventually eight White Sox players were indicted and suspended from baseball on September 28, 1920.

At the time of the suspension, the White Sox were a half-game behind the Indians with three games to play. Cleveland held on to win the pennant against the depleted White Sox, but the Indians felt the suspensions may have tainted their victory.3 The circumstances provided them even more incentive to win the 1921 pennant.

After splitting the first six games of the 1921 season on the road, Cleveland returned home and won four consecutive games against the St. Louis Browns to reclaim first place. The homestand continued when the 34-year-old Cobb, who was in his first year as Detroit’s player-manager, brought his struggling Tigers (3-4) into town to begin a four-game series against the Indians on April 25.

In the first game of the series, Cobb started right-hander Suds Sutherland. Speaker, who was one of the first managers to platoon extensively,4 started his usual left-handed-hitting lineup, which included Charlie Jamieson, Doc Johnston, and Elmer Smith. After Sutherland retired Jamieson on a popup to start the game, Cobb replaced him with veteran left-hander Red Oldham with the intention of neutralizing Cleveland’s platoon advantage. Speaker responded by pinch-hitting with three right-handed batters: George Burns (for Johnston) and Smoky Joe Wood (for Smith) in the first inning and Joe Evans (for Jamieson) in the second. The Indians eventually won, 5-3.

To commemorate the 1920 AL championship, the Indians planned to raise the pennant before the second game of the series. The Plain Dealer proclaimed, “Today is one of the big days in the history of Cleveland, for it is this afternoon the first baseball pennant ever won by a Cleveland professional team will be raised at Dunn Field.”5 It added, “In the years to come Cleveland may win many pennants but this is the first and the first is always the best.”6

A record high temperature of 86 degrees greeted the 15,000 fans who stood silent as the American flag was raised during the playing of the “Star-Spangled Banner.” A pennant with “American League 1920 Champions” in bold letters was raised to great applause.7 A group of dignitaries including American League President Ban Johnson, team owner Jim Dunn, Cleveland Mayor W.S. Fitzgerald, and the great Napoleon Lajoie joined players from the Indians and Tigers in a parade around the field.

The pregame festivities also included a brief speech by Judge Day, which was delivered without the use of a megaphone. “Winning the 1920 pennant by Jim Dunn’s team was a great monument to the honesty of the game,” he declared, in reference to the 1919 Black Sox scandal.8 Day boldly predicted that “the same team would keep the bunting factories working overtime making more pennants for Cleveland.”9

Speaker was prepared for another bait-and-switch by Cobb when he devised the day’s lineup. Cobb had tapped left-handed pitcher Bert Cole for his first major-league start after one relief appearance on April 19. Consequently, Speaker started seldom-used right-handed batters Tex Jeanes and Lou Guisto, along with veteran backup outfielder Jack Graney. He did not want to insert his regulars until he was convinced that Cobb wasn’t going to bring in a right-hander early in the game.10

In the bottom of the first, Jeanes led off with a walk, Guisto struck out, and Speaker doubled, sending Jeanes to third base. Graney, who hit from the left side, was scheduled to bat next. With no one warming up in the Tigers bullpen, Speaker pinch-hit Wood for Graney. Wood hit a sacrifice fly to score Jeanes and give the Tribe a 1-0 lead after one inning.

The Tigers greeted Cleveland starting pitcher Ray Caldwell with four straight singles to start the second inning, knocking him out of the game. Speaker brought in righty reliever Bob Clark. He gave up two singles and a double in two-thirds of an inning, and the Tigers had a five-run inning. Detroit added a run in the third to take a 6-1 lead.

But the Indians rallied to tie the game after seven innings. Larry Gardner doubled home a run in the third; Joe Sewell followed by singling in two more, cutting the deficit to 6-4. After Detroit extended its lead in the fifth on Cobb’s sacrifice fly, Speaker’s RBI single in the sixth and Evans’s two-RBI single in the seventh deadlocked the game, 7-7.

In the top of the eighth, an RBI single by Ralph Young put the Tigers back in front by a single run, 8-7.

Cobb brought in his starter from the day before, Oldham, to pitch the eighth. The Indians tagged him for two runs on Speaker’s walk, Johnston’s triple, and a single by Gardner. Jim Bagby retired the Tigers in the ninth inning to nail down a 9-8 Cleveland victory. As was the case in game one of the series, Bagby earned the victory and Oldham was the loser.

To get the win, Speaker used six pinch-hitters, five relief pitchers, one pinch-runner, and two defensive replacements. The Indians set a new American League record by using 23 players. Only Speaker, Sewell, Riggs Stephenson, and Gardner played the entire game for Cleveland. The only players not used by the Tribe were pitchers Stan Coveleski, Duster Mails, and Nellie Pott.11 Bill Wambsganss and Harry Lunte were on the disabled list.

In summarizing the game, The Lima (Ohio) News and Times-Democrat wrote, “Tris Speaker, manager of the World’s Champion Cleveland Indians can use three shifts of batters to overcome the strategy of opposing managers who desire to switch their pitchers to make Speaker change his lineup.”12

The headlines of the Akron Beacon Journal were: “Everyone but Bat Boy in Lineup for Indians.”13 The Beacon Journal added, “Speaker believed Cobb was again intent on bungling up his lineup of right and left-handed batters.”14

The Indians were on top of the baseball world on that unseasonably warm April day. They were the defending champions, they had three future Hall of Fame players on their roster (Speaker, Coveleski, and Sewell), and they were perched in first place.

But the rest of the season did not go according to plan. Bagby and Caldwell did not perform as well in 1921 as they did the year before, and the Indians suffered through several injuries, the most serious of which was a knee injury to Speaker on September 11 that hindered him for the remainder of the season.15 With six games left on the schedule, the Indians were still tied for first place, but they lost five of their last six games and finished 4½ games out.

The Yankees, led by Ruth, dethroned the Indians to win their first AL pennant, and they went on to dominate the American League for decades.16 When Judge Day predicted that the bunting factories would be working overtime making pennants, he should have said that they would be producing them for the Yankees.

In addition to sources cited in the Notes, the author relied on Baseball-Reference and Retrosheet.org.

1 Speaker had been Cleveland’s player-manager since July 18, 1919. During that day’s game against the Yankees, Speaker, who had been serving as an assistant manager to Lee Fohl, signaled from center field for Fohl to bring in a right-handed pitcher to face Babe Ruth. Fohl brought in left-handed pitcher Fritz Coumbe instead. Coumbe promptly gave up a three-run homer to Ruth, and the Red Sox won. Fohl was despondent after the game and decided to quit as manager. Franklin Lewis, The Cleveland Indians (New York: G.P. Putnam’s Sons, 1949), 102.

13 “Everyone but Bat Boy in Lineup for Indians.”

14 “Everyone but Bat Boy in Lineup for Indians.”

16 Ruth broke his own home run record by slamming 59 home runs in 1921. He broke it again six years later when he hit 60 home runs.