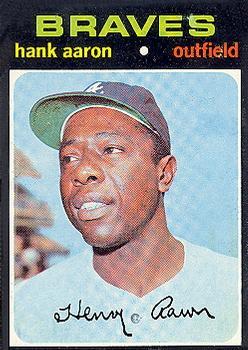 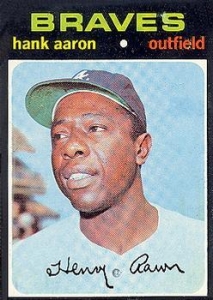 Hank Aaron quietly and unassumingly approached another significant career milestone. Eighteen seasons into his major-league career in April 1971, the 37-year-old Aaron was one home run shy of joining two fellow sluggers, Babe Ruth and Willie Mays, as the only players in baseball history with at least 600 career homers. Ruth topped the leaderboard with 714 homers, and Mays, still active with the San Francisco Giants, was second with 633 longballs.

Through Aaron’s first 15 games during 1971, he had hammered seven home runs in 64 plate appearances. His latest homer — the 599th of his career — had come against Dave Roberts of the San Diego Padres in the ninth inning of the first game of a doubleheader on April 25. Aaron was hitless in a pinch-hit appearance in the nightcap; after an off day, he and the Atlanta Braves returned to action on April 27, hosting the San Francisco Giants.

Aaron’s Braves had started the season better than they finished the previous season. In 1970 Atlanta finished with a 76-86 record, fifth place in the National League West and 26 games behind the NL pennant-winning Cincinnati Reds. As May approached, the Braves were 9-8, third in the division and four games behind the first-place Giants. Under manager Lum Harris, the Braves’ offense was led by Aaron, rookie speedster Ralph Garr, and slugging catcher Earl Williams. Established pitchers Phil Niekro and Ron Reed anchored the rotation.

The Giants entered the game with an NL-best 14-5 record, 3½ games ahead of the second-place Los Angeles Dodgers. San Francisco finished third the previous season, 16 games behind the Reds. Charlie Fox, who took over the team the previous season, returned at the helm. The Giants featured three sluggers at various points of their careers: the seemingly ageless 40-year-old Mays; Willie McCovey at the height of his career, the major-league OPS leader for three consecutive years; and 25-year-old emerging superstar Bobby Bonds. Their staff was led by two pitchers bound for Cooperstown, Gaylord Perry and Juan Marichal.

Reed took the mound for Atlanta. The 6-foot-6 right-hander had struggled since his season debut. After a rough outing against Pittsburgh five days earlier, the 28-year-old Reed was 2-2 with a 4.32 ERA over 25 innings. Opposing batters were hitting .347 and slugging .558 against him. Reed threw a fastball, slider, curve, and slip pitch; Aaron reportedly praised his varied repertoire, saying, “The last kid I saw coming up with so many pitches was Juan Marichal. Most kids have one or two pitches when they come up, but Reed has several. And he can control all of them.”1

Perry started for San Francisco. The veteran right-hander led the majors in innings pitched and batters faced over the past two seasons, also leading the NL with 23 wins in 1970 and finishing second in the NL Cy Young Award voting. Well-known for throwing a spitball, the 32-year-old Perry ’s arsenal also included a slider, fastball, curve, change, and a recently developed forkball.2 Through his first four starts, Perry compiled a 3-1 record and a 2.81 ERA over 32 innings, striking out 27 and limiting opposing batters to a .219 batting average.

Reed started the game by retiring San Francisco in order, striking out Mays to end the inning. Aaron’s first attempt at hitting his 600th home run occurred during the first. With one out, Garr singled and was picked off first base, but advanced to second on Perry’s wild pickoff attempt. Aaron, batting in his customary third spot, crushed a double off the rightfield wall; had the ball flown three feet higher he would have homered.3 He settled for the 542nd double of his career, tying Harry Heilmann for eighth on the career leaderboard.4 Garr came home to open the scoring, and Félix Millan singled Aaron home, giving Atlanta a 2-0 lead and ending Perry’s 27-inning scoreless streak against the Braves.5

Reed escaped a bases-loaded jam in the second inning. With two outs, Ken Henderson walked, Tito Fuentes singled, and Hal Lanier walked. But Perry couldn’t help his own cause and struck out. Perry encountered no problems on the mound during the bottom half.

The Giants’ offense broke through during the third inning. Bonds singled and took third on Chris Speier’s single to right. With runners at the corners, Mays doubled to right, scoring Bonds and sending Speier to third. McCovey was intentionally walked to load the bases. Dick Dietz singled to right, plating Speier and Mays, and the Braves led 3-2. Reed wiggled out of another tight spot, getting a fielder’s choice groundout and fly out.

The bottom of the third began with a Sonny Jackson fly out. Garr singled. Aaron approached the plate for the second time in the game. On Perry’s first pitch — fastball, high and inside — Aaron hammered his 600th career home run 350 feet into the Atlanta sky, clearing the screen near the left-field foul pole and striking the concrete wall beyond the fence. Anticipating a first-pitch fastball, Aaron noted, “I read in the paper where Perry said I’d have to earn it, so I worked hard. I guessed fastball, and that’s what he threw.”6

The fans cheered Aaron wildly as he rounded the bases. He was mobbed by his teammates at the plate, headed into the dugout, came back out of the dugout, and acknowledged the excited crowd.

The milestone home run was only Aaron’s second off Perry; he hit his first on July 16, 1964, spanning 90 plate appearances.

After the celebration subsided, play resumed with Atlanta leading, 4-3. Cepeda grounded out. Millan singled and stole second. Hal King walked, and the Braves threatened to widen their slim lead. But Williams grounded out to end the inning.

McCovey tied the game with a solo homer to deep center in the fifth. He provided another timely hit two innings later, as his seventh-inning sacrifice fly scored Speier and put San Francisco back ahead, 5-4.

Atlanta quickly responded. Marty Perez led off the bottom half with a triple to right. Perry bore down and retired the next two hitters. With the top of the Giants’ order due up for the third time, Steve Hamilton relieved Perry. Garr greeted Hamilton with his fourth hit of the game, an RBI single to center, driving home Perez with the tying run. Garr’s single was his eighth consecutive hit.7

In the eighth inning, Bob Priddy relieved Reed, ensuring that neither starting pitcher factored into the decision. Priddy allowed Bonds’s harmless two-out single as the Giants never threatened. The Braves missed a scoring opportunity during the bottom half. With two outs, Atlanta had the go-ahead run on second base and a potential insurance run on first, but a foul pop fly by Perez ended the rally. Neither team scored during the ninth, and fans were treated to some extra baseball.

Lanier started the Giants’ 10th with a single. Both Al Gallagher and George Foster struck out. Speier’s third hit of the game dropped into shallow right field. Mays singled into right-center — his fourth hit of the night — scoring Lanier and moving Speier to third. McCovey struck out, but the Giants led.

John Cumberland returned to the mound for the Giants in the bottom of the 10th. Mike Lum fouled out. Millan singled, and the tying run was aboard. King hit a groundball to the right side of the infield, forcing Millan at second. Jerry Johnson entered the game to secure the final out. Williams grounded to second for a fielder’s choice, and the Giants’ one-run extra-inning win was preserved.

Nine days before his 40th birthday, Mays sparked San Francisco’s offense with the game-winning RBI during his four-hit night. Speier banged out three singles and scored twice while the heart of the Giants’ lineup — Mays, McCovey, and Dietz — had two RBIs apiece. Atlanta’s Garr singled four times, raising his early-season major-league-leading batting average to .434.8 Aaron homered, doubled, and drove home three runs. Cumberland earned his second win with 1⅔ scoreless innings and Johnson earned his second save by retiring the final batter. Priddy absorbed his first loss in his final season in the majors.

The Braves finished 82-80, in third place in the NL West, eight games behind the division-winning Giants. The Giants finished 90-72, reaching the playoffs for the first time since 1962. The Pirates defeated the Giants 3 games to 1 in the NL Championship Series.

When asked about breaking Ruth’s record, Aaron replied, “714 is a long way off and I’m not too concerned about that now. If I get hot, the homers will come.”10

The author thanks John Fredland for his article recommendations, Bruce Slutsky for his fact-checking, Len Levin for his editing, and Lisa Gattie for her meaningful input.

Aaron, Hank, and Lonnie Wheeler. I Had a Hammer: The Hank Aaron Story (New York: HarperCollins, 2007).