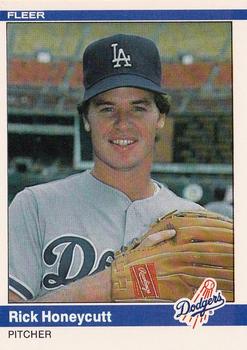 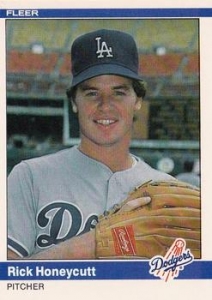 After a sluggish five-game start in 1984, everything clicked into place for the Los Angeles Dodgers throughout the rest of April.

Rick Honeycutt put an exclamation point on the early-season surge, firing a rain-shortened one-hitter against the San Diego Padres on April 27. In the second meeting of a four-game series at Jack Murphy Stadium, a 1-0 victory moved the Dodgers into first place over their division rivals by a half-game.

“This was a big win for us, especially seeing as how we’ve won the first two games down here,” Dodgers manager Tom Lasorda said after his team’s sixth win in a row was secured when the game was called with two outs in the top of the seventh inning. “Rain or not, we’re in first place, right where we want to be, and we’re going to stay there.”1

The top of the standings was a familiar place for the Dodgers, who had won four National League West Division titles since Lasorda’s first season as full-time manager in 1977, stealing bragging rights as the NL’s powerhouse team from Cincinnati’s Big Red Machine.2 San Diego – which had never won a division title in its 15 years of existence and had finished at or above .500 only three times – brought a retooled roster into the season with aspirations of dethroning the Dodgers, and had been described by Sports Illustrated as the “Beast Team in Baseball” in a cover story earlier in April.3

But for one night, Honeycutt shut down San Diego’s desires; his sinker was effective and helped him flirt with perfection in arguably the best start of his career.4 The Padres (14-7) never hit a ball out of the infield, and their only hit was a bunt single by Luis Salazar in the fourth inning. Thirteen of San Diego’s 18 outs came on grounders, two were infield popups, and another was on a sacrifice bunt; Honeycutt added two strikeouts.

The shutout was Honeycutt’s second of the young season, lowering his National League-leading ERA to 1.38 and improving his record to 4-0. With the Dodgers at 15-7 in the early going, Honeycutt found himself in unfamiliar territory, but he was certainly hoping he’d continue doing his part to get Los Angeles back into the NLCS for a second season in a row.5

“Most of the teams I’ve played for were 20 or 25 games behind in August or September,” Honeycutt said late in the 1983 season after he was traded to the Dodgers from the Texas Rangers.6 “You still want to win, but it becomes just a job. It seems like you just go through motions.”7

Those motions had left Honeycutt with an inflamed shoulder joint as the 1983 season wound down. Honeycutt stubbornly fought through the pain without telling team trainers during the Dodgers’ playoff push, but despite that, he entered 1984 pain-free8 – and pitching like a Cy Young Award candidate.

Honeycutt had shown flashes of brilliance earlier in his career. He started the 1980 season at 7-1 to make the All-Star team but finished with a 10-17 record for the Seattle Mariners. Before being traded to the Dodgers in 1983, Honeycutt was an All-Star with the Rangers and led the American League with a 2.42 ERA. Yet his career totals through seven seasons included a 4.04 ERA and a 58-75 won-lost record.

At spring training in 1984, Honeycutt got his first real taste of the Dodger way of pitching – getting advice from pitching gurus like Red Adams, Ron Perranoski, Dave Wallace, and Hall of Famer Sandy Koufax.9

“All those gentlemen showed me a different world in what they presented to pitchers,” Honeycutt said. “I always leaned on Sandy being the main guy, the guy you always respect so much. … I remember the bullpens and things he would say: ‘These are things we believe in. They may not be for everybody, but these are the things we’d like you to try, and this is why.’ The more he would talk, it just made sense. All the things they wanted you to do, they just made sense mechanically.”10

With his hot start in 1984, Honeycutt was named the National League’s Pitcher of the Month for April, but he eventually tailed off as the season wore on. He finished the year at 10-9 but sported a 2.84 ERA – the lowest of his career for any season when he was a starter.11

Action between the Dodgers and Padres on April 27 was halted at 8:48 P.M., but the game wasn’t officially called off until a downpour began at 10:37. Most of the 34,222 fans in attendance had already departed, left to wonder if the Padres would have figured out how to wrangle some run-scoring hits off Honeycutt if the weather had stayed clear.

Honeycutt induced six straight grounders over the first two innings – two to himself and one to every other infield position. After getting another groundball out to open the third, he struck out Garry Templeton and his mound counterpart, Tim Lollar, for a perfect first trip through the batting order.

“If I can get through the first couple innings, I can tell whether I have good stuff … and I felt pretty good tonight,” Honeycutt said. “I didn’t miss too many spots tonight.”12

Lollar, meanwhile, was dancing in and out of trouble throughout the first three innings, but limited the damage. Bill Russell hit a one-out single and stole second in the top of the first, and Candy Maldonado walked to put two runners on. But Pedro Guerrero popped up to second Maldonado was forced out at second on Mike Marshall’s grounder to third, ending the modest threat.

Steve Yeager homered to open the second inning for the game’s only run. It was his 97th career homer – but his 21st off Padres pitching.

“This must be the only team that gives me anything to hit,” Yeager said. “He threw a good pitch. I was just able to hit it well.”13

Lollar retired the next three hitters, and after surrendering a leadoff walk to Steve Sax in the third, he used a double play to escape any trouble. Los Angeles was working for another rally in the fourth, but Lollar again snuffed it out. Guerrero led off the inning with a single and stole second, but Lollar got Marshall and Yeager to hit grounders to short and German Rivera to fly out to center. The speedy Salazar stepped up to open the bottom of the fourth inning with hopes of finally sparking a rally for the Padres. He was determined to lay down a bunt on the first pitch, and with a poor defensive alignment from the Dodgers added in, it became an easy single.

“When the pitcher threw the ball, the first baseman moved back,” Salazar said. “When he moved back, the pitch was thrown outside. That’s a good pitch to bunt.”14

Added Lasorda: “It was placed in the right spot. It was a helluva bunt.”15

Salazar’s gambit almost worked. He was sacrificed to second by Alan Wiggins and moved to third on Tony Gwynn’s grounder to first. But even though Honeycutt’s chance at a perfect game or no-hitter was spoiled, he wasn’t rattled by a runner in scoring position. The Padres’ Steve Garvey knocked a grounder to third to end the inning and preserve Honeycutt’s chance for a shutout.16

Dodgers shortstop Dave Anderson drew walks in the fifth and seventh innings as the game’s only other baserunner.

After a delay of 1 hour and 49 minutes, the game was called, making Honeycutt the 10th pitcher in franchise history to throw a one-hitter.17

Los Angeles lost the next night but won the series finale. Efforts to hold back the up-and-coming Padres the rest of the summer were unsuccessful. The Dodgers fell out of first place on June 2 and went 50-60 the rest of the season while fading to a fourth-place finish. San Diego reclaimed sole possession of the division lead on June 9, went 59-47 to close the season, and won the National League pennant.19

5 Through Honeycutt’s first seven seasons, he had pitched for a winning team only twice – in the strike-shortened 1981 season with the Rangers and for the last seven weeks of the 1983 season with the Dodgers, who lost the NLCS to the Philadelphia Phillies.

6 The Dodgers gave up starting pitcher Dave Stewart, $200,000, and a player to be named later (Ricky Wright) to acquire Honeycutt on August 18, 1983. Honeycutt and Stewart later became teammates with the Oakland Athletics in 1987, and both pitched in Oakland’s Game Three victory in the 1989 World Series.

9 Honeycutt later had the chance to give back, serving as the Dodgers’ pitching coach from 2006 to 2019.

11 Honeycutt transitioned into a full-time relief role with the Oakland Athletics in 1988. He and Dennis Eckersley are the only two major-league pitchers to start at least 250 games and pitch another 500 in relief.

16 In Garvey’s time with the Dodgers, he was once the player who bunted for a single to spoil a perfect game. It came on July 17, 1977, in the eighth inning of a scoreless game. San Diego’s Bob Owchinko had retired the first 22 batters before Garvey reached on a bunt single. The Dodgers won that game, 1-0.

17 In addition, no Dodgers pitcher fired a weather-shortened complete game again until June 8, 2014, when Clayton Kershaw pitched all six innings of a 6-1 win over the Colorado Rockies at Coors Field.

19 The Padres lost the World Series to the Detroit Tigers in five games. The Dodgers rebounded, winning the division again in 1985.