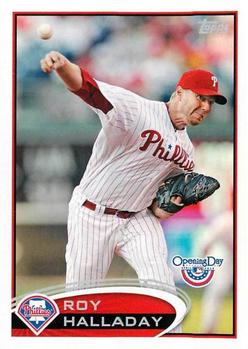 As the 2012 season opened, Philadelphia Phillies ace Roy Halladay rode the crest of a decade of dominance. But he had injured his back seriously during the 2011 postseason; it would soon end his celebrated career and lead to painkiller addiction and tragic death. Any signs of concern were scarce on Opening Day, however, as Halladay pitched eight shutout innings, holding the Pittsburgh Pirates hitless after their second batter of the game in a 1-0 win at Pittsburgh’s PNC Park.

Halladay, whom biographer Todd Zolecki described as “arguably the greatest pitcher of his generation, [with] an unparalleled work ethic and legendary mental approach,” had reached his profession’s apex by 2012.1 After a sublime eight-season stretch with the Toronto Blue Jays from 2002 to 2009 — winning one American League Cy Young Award (in 2003) and placing in the top five four other times — Halladay, longing to play for a championship, had pushed for a December 2009 trade to the Phillies, at that time winners of two NL pennants in a row and World Series champions in 2008.2

His first two seasons in Philadelphia blazed even brighter, with 40 total wins and the most Wins Above Replacement in the NL over the two-year period.3 Halladay threw a perfect game in May 2010; that October he pitched the second postseason no-hitter ever. He added a second Cy Young Award in 2010 and finished second in 2011; he was in the top 10 for NL Most Valuable Player votes in both seasons.

Philadelphia won the NL East both years but fell short of the World Series. The enduring image of their final game of 2011, a 1-0 loss to the St. Louis Cardinals in Game Seven of the National League Division Series, was star first baseman Ryan Howard writhing on the ground after tearing his Achilles tendon on the game’s final out.4 Howard missed half of the 2012 season and never regained his form as one of the game’s top power hitters.5

But a less visible injury that night also had devastating consequences. While delivering a pitch in the second inning, Halladay felt a pop in his lower back.6 Fueled by adrenaline and competitive drive, he remained in the game through the eighth.7 Offseason medical examination revealed stress fractures and degenerative discs, impairing his ability to transfer kinetic energy from his legs to his upper body.8 He began managing the pain with prescription opioids.9

During spring training in 2012, scouts noticed that something appeared out of order with Halladay. His pitches were slower and lacked their characteristic sharpness. A media report implied Halladay was injured. The 34-year-old Halladay criticized the report, asserting that any struggles were the product of getting older, not physical impairment.10

None of these concerns, however, would keep Halladay from Philadelphia’s season opener in Pittsburgh. Whether a Blue Jay or Phil, Halladay had started Opening Day every season since 2003, the game’s longest active streak.11 For the 2012 opener, manager Charlie Manuel backed him with a lineup missing two stars from the group responsible for five consecutive NL East titles: Ty Wigginton held down first for Howard, and rookie Freddy Galvis made his major-league debut at second for Chase Utley, who was sidelined with a knee injury.12

Pittsburgh manager Clint Hurdle, whose Pirates aimed to end a streak of 19 consecutive losing seasons, picked Erik Bedard to start on a sunny Thursday afternoon.13 The 33-year-old left-hander had signed as a free agent after eight seasons in the American League.14 Bedard allowed Jimmy Rollins’ two-out bunt single in the first but held Philadelphia scoreless.

Alex Presley led off for Pittsburgh. Halladay threw two strikes, then missed with two balls outside. Presley served his 2-and-2 curve into center for a single.

Jose Tabata swung at the first pitch, and the ball dribbled to rest inside the third-base line. The Phillies had no play; the Pirates had two on and Andrew McCutchen up.

McCutchen, a rising star with a new six-year contract,15 took a ball inside. He hit Halladay’s second pitch solidly toward short — but Rollins picked it on the backhand and threw to Galvis, whose relay to Wigginton completed the double play. Presley took third, but Neil Walker’s fly out stranded him there.

Philadelphia’s John Mayberry Jr. lined a single to right with one out in the second. Carlos Ruiz fought off an inside pitch and dropped a popup into right for another hit.

Galvis had two runners on for his first major-league at-bat. But Bedard induced a two-hopper to shortstop Clint Barmes, who started an inning-ending double play.

Both starters soon took over. Halladay retired the Pirates in order in the second and third; Bedard did the same the third and fourth. Halladay extended his perfect stretch to eight batters before hitting McCutchen with a 1-and-2 pitch with one out in the fourth. But Mayberry tracked down Walker’s liner to PNC Park’s vast left field, and Halladay raced to first for Wigginton’s throw on Garrett Jones’s grounder for the third out.

Philadelphia mounted mild scoring threats in the fifth and sixth. Ruiz grounded a one-out single just out of Barmes’s reach for a single in the fifth, but Pedro Alvarez turned Galvis’s bouncer to third into an around-the-horn double play — Galvis’s second twin killing in his first two major-league at-bats. Shane Victorino walked with one out in the sixth and stole second an out later, only to remain there when Rollins popped up.

After one out in the seventh, the Phillies made their move. Wigginton lined a breaking ball into center for a single. Mayberry took a good cut at Bedard’s first pitch but pulled it foul. He drove the next one to the opposite field, into the right-field corner. Third-base coach Juan Samuel held Wigginton at third; Mayberry had a double.

Hurdle brought the infield in. Ruiz lined to shallow right. Tabata’s catch was at waist level, as Wigginton tagged up. The throw arrived high, and Wigginton slid home safely. The Phillies had the day’s first run.

Now in the lead, Halladay faced the heart of Pittsburgh’s order in the seventh. Alternating strikes with apparent waste pitches, he fanned McCutchen on a fastball. Harmless grounders from Walker and Jones retired the side.

Bedard’s six-hit outing through seven had given the Pirates a chance.16 Hurdle went to the bullpen, which contributed two scoreless innings to keep Pittsburgh’s deficit at one run.

Halladay remained on the mound in the eighth. Barajas popped up; Alvarez flied to shallow center. Thirteen Pirates had gone down in a row. Halladay got ahead of Barmes 1-and-2, but the next pitch stayed inside and hit Barmes on the knee. Pittsburgh had its first baserunner since McCutchen’s hit batsman in the fourth.

With the pitcher’s spot due, Hurdle sent up Nate McLouth. McLouth had started his career in Pittsburgh and represented the Pirates in the 2008 All-Star Game but was traded to Atlanta in June 2009.17 He had returned as a free agent in the offseason.18

The crowd of 39,585, a PNC Park record, cheered loudly in recognition and support. But Halladay fanned McLouth on a breaking ball — his fifth strikeout of the game on his 92nd pitch — and the Phillies carried their 1-0 lead to the ninth.

That was all for Halladay. Manuel summoned Jonathan Papelbon, lured from the Boston Red Sox by a four-year, $50 million contract in November 2011, to close out the game.19 Papelbon dispatched Presley, Tabata, and McCutchen on 10 pitches to save Halladay’s 189th career win.

“It was a tremendous game,” Manuel said afterward. “We were fortunate to score a run.”20

“Any time you go out there thinking I can’t give up a run, or two runs, it affects the way you pitch,” Halladay said. “For me, it’s just keeping it simple and going out and trying to make pitches and keep as many runs off the board as possible.”21

Halladay continued to keep runs off the board at first; his ERA through April was 1.95. But his velocity was down, and he went on the disabled list in May with shoulder soreness.22 His 4.49 ERA in 2012 was his highest since 2000, and Philadelphia missed the postseason for the first time in six seasons.

After shoulder surgery interrupted his 2013 season,23 Halladay retired that December. His back problems were central to his decision. “One of the major factors was there’s been stuff written about shoulders and stuff,” he said. “I’ve been throwing to my boys, and my shoulder feels as good as it ever has. … But the major issue for me is, as I mentioned to some of the media last spring, was my back really became an issue for me.”24

Halladay underwent treatment for opioid addiction after retirement.25 He died in 2017 when an airplane he was piloting crashed into the Gulf of Mexico; the accident investigation revealed prescription painkillers, among other medications, in his system.26 He was inducted into the Baseball Hall of Fame in 2019.

I was stationed near Dayton, Ohio, with the US Air Force in April 2012. On the morning of this game, I made the four-hour drive to Pittsburgh, my hometown. I got there in time to sit with my brothers in Section 333, waiting for the Pirates to take the field in the top of the first while the ballpark’s sound system played the band Civ’s 1995 modern rock hit “Can’t Wait One Minute More.”

In addition to the Sources cited in the Notes, this article relied on the Baseball-Reference.com and Retrosheet.org websites for pertinent material and the box scores noted below. Source materials also included game coverage in the Philadelphia Daily News, Philadelphia Inquirer, and Pittsburgh Post-Gazette newspapers; and a recording of Root Sports’ Pittsburgh television broadcast, available at the YouTube link noted below.

Special thanks to Todd Zolecki, whose 2020 Halladay biography, Doc: The Life of Roy Halladay, inspired this article and provided much of the background material.