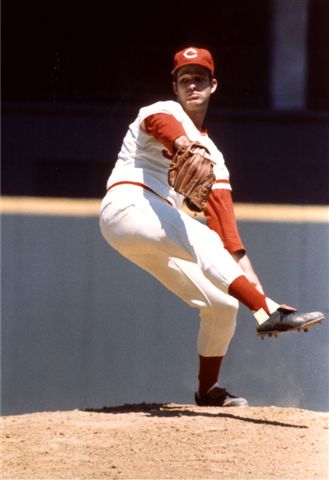 Fans often remember the ends of seasons more readily than the beginnings. What is often associated with the beginnings of the 1975 season for the Cincinnati Reds is that on Saturday, May 17, 1975, the Reds stood at 19-19 and in second place 5½ games behind the rival Los Angeles Dodgers and just a half-game ahead of the Atlanta Braves.1 Three days later, Reds manager Sparky Anderson inserted George Foster as the starting left fielder and moved Pete Rose to third base permanently,2 altering not only the season but also baseball history. How did this overdue team of destiny open the season about five weeks before the Foster/Rose moves?

The Reds opened the season with much unfulfilled promise. Great amateur drafts in the 1960s and clever trades in the recent past had brought much hype to this franchise that had not won a World Series since 1940. In 1970 the year Riverfront Stadium opened, the Reds at one point stood at 70-30 and looked like the next baseball dynasty. They lost the 1970 World Series to the Orioles, but returned to the Series in 1972, only to be derailed by the actual next baseball dynasty, which turned out to be the Oakland Athletics, just at the start of winning three straight World Series. Most Reds fans do not care to remember the debacle that was the 1973 playoff loss to the pitching-strong New York Mets when Pete Rose brawled with Bud Harrelson. The National League belonged to the Dodgers in 1974, and all of a sudden they were very confident that they would be the team to ultimately dethrone the A’s. Scripps-Howard predicted that the Dodgers would win the World Series in 1975 because the A’s had lost Catfish Hunter to the Yankees via free agency.3

It was against this backdrop that the Reds opened the 1975 season against the reigning National League champion Dodgers. This was billed as a Bowie Kuhn (baseball commissioner at the time) match made in heaven and a “World Series in April.”4

In those days, the baseball season started in Cincinnati in homage to the fact that they were the first professional baseball franchise, more than a century earlier in 1869. The opening of the season was synonymous with the city of Cincinnati and its Midwestern riverfront community. There would be parades in downtown Cincinnati and much more pomp and circumstance. Reds fans were anxious and optimistic for the team to find its stride and finally fulfill its promise.5 Anderson himself said, “I am always nervous for the opener, maybe it’s more excitement than nervous. Opening Day is different in Cincinnati. The whole city stops and waits for you.”6

The 1975 season opened in Cincinnati with a record crowd of 52,526, the largest up to then for a regular-season game in Riverfront Stadium.7 Anderson tapped Don Gullett to start the game for the Reds with the hope that he would become the “stopper” that the pitching rotation desperately needed.8 Dodgers manager Tommy Lasorda countered with ace Don Sutton. Both pitchers were on their game from the start and neither team scored through three innings.

The Dodgers took a 1-0 lead in the fourth on consecutive walks to Jimmy Wynn and Joe Ferguson, followed by a run-producing single off the bat of reigning NL MVP Steve Garvey. Sutton held the Reds scoreless until the sixth inning, when Rose and Joe Morgan singled. With two outs, Dave Concepcion singled in Rose with the tying run. Sutton was brilliant otherwise, throwing seven innings and giving up only the one run and five hits, while striking out five and walking one. However, Gullett was even better, lasting 9⅔ innings and also allowing only five hits and one run, and striking out four, but walking five. Mike Marshall, the 1974 Cy Young Award winner out of the bullpen, replaced Sutton after seven innings and tossed five shutout innings, allowing only two hits and two walks while striking out three. The score was tied, 1-1, after nine innings.

The pitching performances were very promising for both teams; the Reds had long been criticized for falling short of championships due to a lack of pitching, and the Dodgers were worried about their pitching staff as former ace Tommy John was injured, leaving Sutton and Andy Messersmith their only tested starting pitchers. Both teams had stellar offensive teams with speed on the bases and power. The Reds were a great defensive team up the middle, lined with Gold Glove performers, but the Dodgers worried about their average defense.

Gullett had retired 11 straight batters before walking Bill Russell with one out in the 10th. Marshall stayed in the game to hit and sacrificed Russell to second. Anderson replaced Gullett with Clay Carroll, who retired pinch-hitter Manny Mota to end the mild threat.

The game remained tied into the bottom of the 14th with Carroll, Pedro Borbon, and Pat Darcy shutting out the Dodgers over 4⅓ extra frames. Knuckleballer Charlie Hough relieved Marshall and pitched a 1-2-3 13th. The Dodgers were scoreless in the 14th despite a double and single. Concepcion opened the bottom of the inning with a single that kicked off the glove of third baseman Ron Cey, then went to second on a passed ball by catcher Steve Yeager. Hough walked Cesar Geronimo. Both runners advanced on a sacrifice by Ken Griffey Sr. Darrel Chaney hit a bouncer back to Hough on the mound and he cut down Concepcion attempting to score as Geronimo reached third base. Foster, batting for pitcher Pat Darcy, hit a slow roller to Cey and beat the throw to first by a foot as Geronimo came home with the winning run.

The play on Foster at first was heavily disputed by first baseman Garvey and second baseman Davey Lopes, who slammed his glove into the Riverfront turf after first-base umpire Paul Pryor called Foster safe. Garvey said, “In my heart I knew we had him,” and the quiet Foster articulated, “It was a split-second play, I could have been called ‘safe’ or ‘out,’ but I will go along with the umpire.”9 Cey called it “a brutal call.”10  He later conceded, “They played a good game and we played a good game.” Garvey summed it up later, saying, “A pretty good Opening Day. A well-played game. This is what baseball is all about.”11

Darcy was the winning pitcher with Hough suffering the season-opening loss. The game, which lasted 3 hours and 23 minutes, sparked the Reds to an opening series sweep of the rival Dodgers as they then won the next two games, both also by one run. The season was off to a great start and no one imagined that the Reds would soon sputter through a very mediocre first five weeks of the season.12

Perhaps it was foreshadowing that Foster would be the hero of Opening Day for the Reds. It was his insertion into the starting lineup and the move of Rose to third base replacing Opening Day starter  John Vukovich that jump-started the Reds to a 108-54 record and a record 20-game margin over the second-place Dodgers. The Reds won the NLCS over the Pirates and then a memorable World Series over the Red Sox in seven games.

The 1975 season was a historic year, with Frank Robinson becoming the major leagues’ first African-American manager. It was the 100th year of the National League and the 75th year of the American League with players changing teams more than ever before in history.13 It all began on that sunny, cool afternoon in Cincinnati with two great teams battling it out for 14 innings. Gullett went on to a 15-4 season with a staff-leading 2.42 ERA while previously sore-armed pitcher Gary Nolan and Jack Billingham also won 15 games. Finally, the pitching was living up to its promise. Morgan led the offense on his way to winning the next two NL MVP awards. However, in retrospect, it was this Opening Day victory over the Dodgers that did indeed help re-ignite the machine.

I would like to thank my wife, Diane, for going to many baseball games with me the past 30 years. We were too young to share the success of the 1975 and 1976 Reds together, but she was there with me during the pennant race and championship run of the 1990 Reds.

Also, I am proud of my son Adam’s and my daughter Sami’s passion and love for the game. Adam will always be a Reds fan even though he loves the Indians more. Sami is a huge baseball fan, spending endless days with me in ballparks, but who recently claimed to like the Indians and the Dodgers the most. Yes, the old rival Dodgers!

Finally, I am very grateful for the assistance of Karen Oye, a friend and librarian at the Kelvin Smith Library at Case Western Reserve University. Karen used her substantial skills to locate many sources used in writing this piece. Her network included colleagues at the University of Cincinnati, which proved invaluable.

In addition to the sources cited in the Notes, the author relied on Retrosheet.org and Baseball-Reference.com.

4 Bob Hertzel “Reds, LA Down to Business,” Cincinnati Enquirer, April 7, 1975. Coming into the 1975 season, the Dodgers expected to be stronger than the team that won 102 games the year before. See Associated Press, “Dodgers Expect to Repeat: Offense Makes NL Champs Tougher,” Los Angeles Times, April 7, 1975. Expecting to be more consistent on offense and hitting to all fields, the players felt that they could fall behind the Reds during the season but still have enough strength to beat them out for the Western Division in the end. See Associated Press, “It’s Time to ‘Play Ball,’” Cincinnati Enquirer, April 7, 1975.

7 Associated Press, “52,526 see Reds trip L.A. in 14,” Cleveland Plain Dealer, April 8, 1975. It was 50 degrees and sunny for this early April contest. Baseball being played at 50 degrees, despite the sun, is still cold, but Sparky Anderson tried help prepare his players by having three charcoal-burning hibachi grills in the Reds dugout to help warm their hands. See Bob Hertzel, “Reds Say, ‘Let George Do It’ — So He Did It,” Cincinnati Enquirer, April 8, 1975.

12 In fact, the Reds would head to the West Coast after the season-opening sweep of the Dodgers only to lose two of three to the lowly Padres. Then they were swept in four games by the Dodgers, all close games. The Reds and the Dodgers were easily two of the best four teams in baseball to start the 1975 season and they played each other in seven of the first 10 games of the season with each team sweeping the other on its home turf.