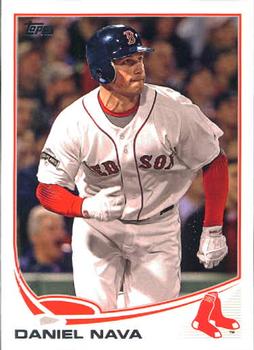 The Boston Red Sox had finished in last place in the American League East in 2012 with a record of 69-93. They were 26 games out of first place. But 2013 was another year. Through the end of July, they had already won almost as many games as in all of 2012; they were 65-44 and in first place, a half-game ahead of the Tampa Bay Rays.

On August 1 they were home at Fenway Park, hosting the Seattle Mariners. They had won a walk-off game the night before, 5-4 in 15 innings, thanks to three bases on balls and then a two-out single to right field by Stephen Drew. That win gave Drake Britton the only win of his big-league career.

Starting for John Farrell’s Red Sox was Ryan Dempster. The right-hander was 6-8 and in the 16th season of his major-league career, his first with the Red Sox.1

First up in the top of the first was Seattle’s shortstop, Brad Miller. He tripled to right field. Dempster struck out Ryan Franklin, the second baseman, but then third baseman Kyle Seager bunted to third base for a single that drove in Miller to give the Mariners a 1-0 lead. There was another strikeout and two walks, but the inning ended with just the one run.

Felix Hernandez started for Seattle. Coming into the game with a record of 11-4, “King Felix” gave up singles to center fielder Jacoby Ellsbury and DH David Ortiz in the first, but also struck out two and got a groundball out.2

The Mariners picked up another run in the top of the third when first baseman Justin Smoak singled to right field with two runners on base.

The Red Sox matched that run in the third, on a double play. Ellsbury had led off with a double. Right fielder Shane Victorino lined out to deep center and Ellsbury tagged and ran to third base. Second baseman Dustin Pedroia walked. Ortiz hit a fly ball to left field and the speedy Ellsbury tagged, ran home, and scored, but the throw from left fielder Dustin Ackley caught Pedroia attempting to advance to second (7-5-6).

The score was 2-1 and stayed that way through four innings. Seager tripled to right field to lead off the Seattle fifth. Seattle’s DH, Kendrys Morales, singled to right and scored Seager. After a strikeout, Smoak hit a double. Morales held and Ackley walked, loading the bases. On a one-strike pitch in the fifth, Seattle catcher Henry Blanco hit a grand slam just fair of the left-field foul pole but over the Green Monster seats. It struck a fan standing on the walkway behind the seats. Seattle’s lead became 7-1. It was Blanco’s second home run of the year; both were grand slams.

Farrell left Dempster in and he struck out Miller to end the inning.

Dempster remained in through the sixth, with knuckleballer Steven Wright taking over to pitch the seventh. Hernandez had allowed a double to left fielder Daniel Nava in the fourth, but pitched one-two-three innings in the fifth and sixth.

Neither side scored in the seventh. The Mariners maintained their 7-1 lead.

Victorino led off the eighth with a home run, bringing the Red Sox a run closer at 7-2. Seattle interim manager Robby Thompson had given the ball to Charlie Furbush and asked him to close it out for Hernandez.3 Furbush walked pinch-hitter Jonny Gomes, but otherwise emerged unscathed.

Wright pitched the top of the ninth. He surrendered back-to-back singles but worked his way through a scoreless inning.

In the bottom of the ninth, Thompson had closer Tom Wilhelmsen take over for Furbush. The year before, Wilhelmsen had worked in 73 games with an earned-run average of 2.50, closing 48 games. This was his 47th appearance in 2013 and he already had 24 saves, though his ERA was 3.61 and he was 0-3. With a five-run lead, he wasn’t even going to quality for a save.

With the bases loaded and nobody yet out, Robby Thompson crossed the third-base line on his way to the mound with his left hand raised, then switched to his right hand. Trotting in from the bullpen was right-hander Yoervis Medina, but umpire crew chief Gary Darling insisted that Thompson’s first call had been for a lefty, and thus sent Medina back and waved in Oliver Perez.4

The tying run had come to the plate in Victorino, who had homered his last time up. On an 0-and-1 pitch, Victorino singled under the diving second baseman into right field and drove in two runs. On a 1-and-0 pitch, Pedroia singled to left and scored Ellsbury.

Now it was a one-run game, 7-6. There were runners on first and second and still nobody out with David Ortiz coming to bat. This was the kind of moment Big Papi had become known for, dating back to 2004 – winning games in a walk-off.

This time, Ortiz struck out on three pitches.

With Ortiz out of the way, the Mariners brought in Medina, a young right-hander in his rookie year. Medina already had 39 appearances under his belt and an ERA of 2.79. His job was to get two outs, starting with Jonny Gomes.

The two battled to a 3-and-2 count. On Medina’s seventh pitch of the at-bat, Gomes singled just to the left of second base and into center field, and Victorino scored the tying run.

Medina was careful pitching to shortstop Stephen Drew, but after six pitches had walked him. The bases were loaded once more. There was still just one out.

Nava was up. He didn’t wait out Medina. He swung at the first pitch and drove it to the warning track in center field. The outfielders had come in close enough that they could have a shot at holding or throwing out the runner (Pedroia) at third if a ball was hit their way. It was the right move, of course. The ball Nava hit was so deep (400 feet, to the deepest part of the ballpark) that center fielder Michael Saunders wouldn’t have had a chance if he’d caught the ball. The ball struck the warning track right at the base of the center-field wall. Pedroia scored the winning run, and the game was over.

Nava might have driven in three runs, with a double or a triple, but once the winning run scored the plate, the game was over and his hit went in the books as a single.

Interestingly, Nava had provided the winning base hit for another Red Sox win against Seattle three weeks earlier, a 10-inning 8-7 victory on July 11. The August 1 win was the 11th walk-off win of the season for the Red Sox.

The Red Sox had scored six runs in the bottom of the ninth inning. Wright got the win. Dempster, who had given up all seven of Seattle’s runs, had been taken off the hook. It was, John Farrell said afterward, “In a word – magical.”5

He amplified a bit: “We don’t quit. Ever. There’s no quit in this bunch.”

Nava’s jersey was shredded in the celebration.

Things were subdued in the visitors clubhouse. “It hurt. It hurt a lot,” said Hernandez, who had struck out eight. This series was a tough one.” Perez said, “Today, Felix did everything he could and we couldn’t get it done. He had done a good job, and we just couldn’t get three outs.”6

In addition to the sources cited in the Notes, the author consulted Baseball-Reference.com, Retrosheet.org, and YouTube highlights of the game. Thanks to Eric Vickrey for supplying the Seattle Times game story.

3 The Mariners’ manager, Eric Wedge, was recovering from a mild stroke; he missed 28 games.