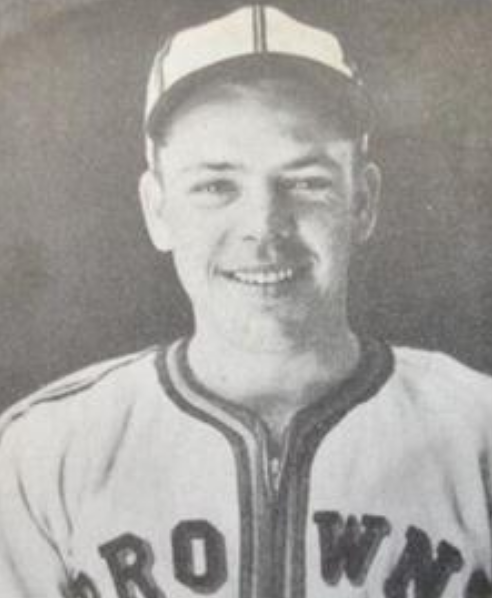 There remained the matter of a ballgame on August 10, 1945. Two, in fact. Newspaper headlines revealed a nation with its collective mind elsewhere, and St. Louisans likely also thought of events far away from Sportsman’s Park. The previous day, the United States dropped an atomic bomb on the Japanese city of Nagasaki, three days after a similar event at Hiroshima. With newspapers reporting on the Japanese offer to surrender, provided Emperor Hirohito could remain on his throne, World War II appeared to be reaching its coda. That Friday’s doubleheader between the St. Louis Browns and Philadelphia Athletics paled in significance to world events –even if it was ladies’ night at the ballpark.

The seventh-place Browns began the day 46-50, nine games behind first-place Detroit. Defending their wartime pennant from 1944, the Browns had spent most of the past two months mired in the second division. Connie Mack’s Athletics opened the season with a 6-2 record, before a six-game losing streak started a downward spiral in which Philadelphia had last place to itself from May 23 through the end of the season. The Athletics stood at 33-63, trailing even the Browns by 13 games. The day’s doubleheader was the third in a week for the Browns, prompting an annoyed St. Louis general manager Bill DeWitt to point out, “There wasn’t a single twilight game on our original schedule. They were made necessary by weather and travel conditions.”1

Before the action on the field, there occurred action in the Browns’ boardroom. During that morning’s Board of Directors meeting at the Ambassador Theater, Browns president Donald Barnes sold his stock to club vice president Richard Muckerman. With this transaction, Muckerman now owned 56 percent of the Browns and assumed the presidency from Barnes.2 Muckerman announced his intention to retain DeWitt as well as manager Luke Sewell. With Barnes credited for building the Browns “into a strong organization . . . well fortified in players and in money for the post war years,”3 there seemed little reason for a dramatic shake-up.

The Browns won the first game of the twin bill, as George McQuinn’s sixth-inning home run provided the margin of victory in St. Louis’s 2-1 win. In the nightcap, Steve Gerkin started for Philadelphia. Despite an 0-12 record, Gerkin had posted a respectable 3.24 ERA throughout the Athletics’ struggles. The 1945 season proved to be the only major-league season for the 32-year-old, and this game would be his last. Swingman Bob Muncrief took the mound for St. Louis with a 5-1 record and a 2.62 ERA. Overall, the Browns were in a weakened state through a combination of trades and injuries. In the past week, St. Louis had sold two veterans to pennant contenders, with outfielder Mike Kreevich going to Washington and pitcher George Caster to Detroit. Regular third baseman Mark Christman, meanwhile, remained in St. John’s Hospital after being knocked unconscious by an Allie Reynolds pitch in the August 6 game against Cleveland. A recurring groin injury kept pitcher Jack Kramer on the sidelines and, although they played, Chet Laabs and Lou Finney were less than 100 percent.

The Athletics jumped on Muncrief right away. Irv Hall singled to open the game and Hal Peck followed with his fourth home run of the season. Two batters into the game, the Athletics led 2-0. Mayo Smith and Dick Siebert also reached base, but Muncrief escaped without further damage. Muncrief’s role in the contest proved short, however. Greek George opened the second inning with a single before being forced out on Gerkin’s bunt. Hall and Peck continued their hit parade with back-to-back singles — Peck’s hit scoring Gerkin — and Muncrief’s day was over. Sewell called upon “stocky southpaw pitcher” Earl Jones, who had became a father again that week, to cool Philadelphia’s bats.4 Hall scored on Bill McGhee’s fly ball to Laabs in left field, a run charged to Muncrief, but Jones managed to keep the score to 4-0, Philadelphia.

Gerkin retired McQuinn and Vern Stephens to open the bottom of the second, yet the Browns managed to tie the game. Laabs and Len Schulte hit consecutive two-out doubles, with Laabs crossing the plate on Schulte’s hit. Gerkin walked Frank Mancuso to set up Jones for a classic case of a pitcher helping his own cause. With two on and two out, Jones hit the first and only home run of his short wartime career to make the score 4-4. After Jones got through the third allowing only an Ed Busch single, the Browns went back to work on Gerkin in the bottom half. When Milt Byrnes singled to open the inning, Mack had seen enough from his starter. Charlie Gassaway, making his only August appearance for Philadelphia, would face the heart of the Browns’ order. Lou Finney’s bunt single made it two on with none out. After Gassaway struck out McQuinn, Stephens doubled to right to score Byrnes and give the Browns a 5-4 lead.

Jones permitted the Athletics only one baserunner in each of the fourth and fifth innings, and then his teammates broke it open in the bottom of the fifth. Gassaway surrendered a leadoff walk to Byrnes, who then beat the throw to second on Finney’s sacrifice bunt. With two on, the heart of the order would really get to work. McQuinn’s double into left field brought home Byrnes, and Stephens’s infield single loaded the bases for Laabs, who singled to score Finney and McQuinn. Schulte followed with his own single to score Stephens. The Browns now possessed a 9-4 advantage with none out against the helpless Gassaway. Although the Athletics pitcher would create another bases-loaded jam for himself with a walk, he got Byrnes on a called third strike to end the fifth. In the sixth the Browns added two more runs when Stephens hit his 16th home run of the season with McQuinn on base. With the score 11-4 after six innings, the Browns “seemed to have the game salted away.”5

Philadelphia scratched out a series of singles and walks against Jones in the seventh, with the result being two runs and an end to Jones’s day. In the bottom half of the inning, St. Louis got back one of those runs. After Don Gutteridge and Byrnes singled with one out against Joe Berry, Finney’s single scored Gutteridge. Lefty West, who had replaced Jones, held a 12-6 lead and retired Peck to start the eighth. West walked Smith before successive singles by McGhee and Siebert loaded the bases. Bobby Wilkins, who had replaced George Kell in the sixth inning, struck out, and light-hitting Busch came to the plate. Busch popped up for what appeared to the third out; however, second baseman Gutteridge “permitted an ordinary pop fly . . . to bounce out of his hands . . . .”6 Smith and McGhee scored on the error, but the Browns led 12-8 and needed just one more out to end the threat.

That out proved difficult to find. George singled to right field, scoring Siebert and Busch and knocking out West. With Sam Zoldak allowing run-scoring doubles to his opposite number Berry as well as Hall, the game was now tied, 12-12. Sewell called upon Sig Jakucki to close out the inning, which Jakucki did by striking out Smith, but only after Peck singled home Hall to grab a 13-12 lead. Philadelphia scored seven runs in the inning, all unearned. Mancuso and Jakucki hit consecutive two-out singles in the eighth, but Gutteridge could not atone for his error and made the third out.

After Jakucki pitched a three-up, three-down ninth, the Browns rallied in the bottom half of the frame. Byrnes led off by hitting a single to center field, and Finney moved him to second on a sacrifice bunt. McQuinn’s grounder to second baseman Hall accounted for the second out but also moved Byrnes to third. With the tying run 90 feet from scoring, Stephens singled into right field, his fourth hit of the day, plating Byrnes and tying the game, 13-13. Gene Moore, who replaced the sore Laabs in the seventh, made the third out, and the game headed to extra frames.

With Berry and Jakucki remaining on the mound, the 10th inning proved scoreless. In the top of the 11th, Jakucki allowed a leadoff walk to Hall, but afterward retired the Athletics in order. Milt Byrnes, who was already 3-for-5, led off the bottom of inning for St. Louis. Byrnes drove a pitch from Berry onto the roof of the right-field pavilion, ending the game, 14-13, with his fifth home run of the season.7  Jakucki notched his 11th win of the season with 3⅓ innings of scoreless relief, “and if ever a pitcher deserved that kind of triumph it is the big blond.”8 The Browns failed ultimately to defend their pennant, but they rebounded over the remainder of the season to finish in a respectable third place.

In addition to the sources in the Notes, the author also consulted baseball-reference.com, retrosheet.org, and the New York Times of August 11, 1945.