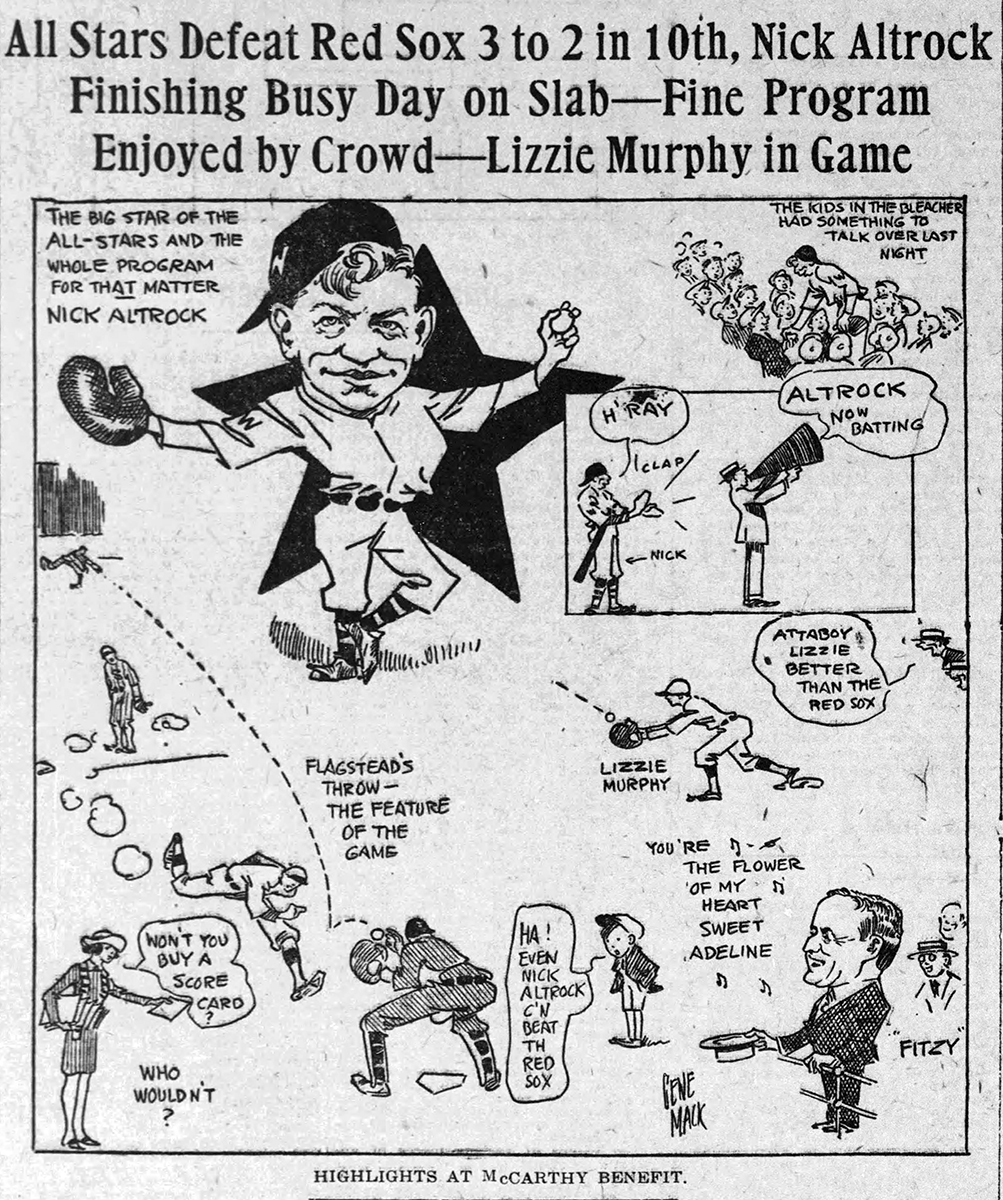 “Batting and playing first base for the Boston Red Sox: Mary Elizabeth Murphy. First base: Murphy.”

You can almost hear Sherm Feller, the longtime Red Sox public-address voice, announce her – the first female ballplayer for the Boston Red Sox. It never happened, though.

It’s well-known that the Red Sox were the last big-league team to have an African American player. In 2022 they, and all other major-league teams, have a different opportunity – the chance to pioneer by fielding the first woman ballplayer in the major leagues.

To date there only one woman has played baseball with a team of men’s major leaguers in a big-league ballpark. Her name was Mary Elizabeth Murphy and she played against the Boston Red Sox at Fenway Park. Lizzie Murphy’s team beat the Red Sox, 3-2.

The year was 1922, and the date August 14. The occasion was Tom McCarthy Day – an exhibition game played at Fenway Park. The game was scheduled to benefit Tommy McCarthy, a popular nineteenth-century player, and Boston native who had been diagnosed with cancer. The Boston Globe called him “one of the greatest outfielders in the game, and who for many years has been close to the hearts of the Boston fans.”1 As it happened, McCarthy died at age 59 on August 5, just days before the benefit.

Babe Ruth, who had committed to play for the All-Star team, had an operation to remove an abscess from his left leg just a couple of days beforehand; his leg had become infected after a rough slide on the basepaths. Otherwise, Ruth would have played on the same team as Lizzie Murphy.

The benefit proceeded nonetheless, repurposed to create a fund to help McCarthy’s daughters. Tommy McCarthy was widely admired among his fellow players and an early member of the Baseball Hall of Fame, inducted in 1946.

Lizzie Murphy was herself pretty well known in New England at the time. This was an era when women were making great strides in a number of areas. It was in August just two years earlier, in 1920, that the 19th Amendment to the Constitution was ratified, granting women the right to vote. Women were active in sports, and newspapers of the day often featured sports-page headlines regarding women’s tennis, swimming, and other sports.

Lizzie Murphy was a novelty, for sure, and a gate attraction. She was also a very good baseball player. A Rhode Island native, she’d played with a number of baseball teams for some years, including the Providence Independents. In 1918 she signed with semipro team owner Ed Carr of Boston, who announced on her signing, “No ball is too hard for her to scoop out of the dirt, and when it comes to batting, she packs a mean wagon tongue.”2 With Ed Carr’s All-Stars, she played a hundred games a summer, reports Barbara Gregorich in her book Women At Play.3 Murphy played in games throughout all the New England states and the eastern provinces of Canada. She had a 17-year career and became known as the “Queen of Baseball.”

At Fenway Park, though, it was to be Queen for a day. Tommy McCarthy had most recently served as a Red Sox scout and the team helped organize his “Day” working with a local committee headed by Jack Morse, Eddie McHugh, and John S. Dooley, chairman.4 Quite a day was prepared, including a presentation of vaudeville prior to the game – and “dancing girls” from the Love and Kisses Company.

Other entries from the Bowdoin Square theater and the Old Howard entertained. Jimmy Coughlin’s 101st Regiment Band played and when the band struck up “Sweet Adeline,” the demand for former Mayor John F. “Honey Fitz” Fitzgerald to sing was so fervent and so persistent that he yielded to the call of the 4,000 or more in attendance, a crowd that included current Mayor James Michael Curley and others. Congressman James A. Gallivan was there and so were former ballplayers like John Irwin and Jerry Hurley.

The program lasted for two hours prior to the 3:30 P.M. game.

Nick Altrock worked the crowd, not only joining in the theatrical numbers but selling scorecards in the stands and shaking hands with several hundred children. Some of the vaudevillians joined him in selling scorecards, but Altrock was the star of the show, and the game.

Lizzie Murphy’s appearance had been trumpeted in advance but, given the uniqueness of the situation, not extravagantly so. Paul Shannon, writing in the Boston Post, gave her two sentences: “Lizzie Murphy, the famous lady first baseman, will be seen in the game for a while. She won’t launch any home runs but lady fans will get a peek at a sister who can cover that initial sack as many a big leaguer.”5 Another paper called her “the brilliant woman first baseman.”6

She was a novelty, of course, but a popular one. The Boston Herald observed, “She had her picture taken so often that Nick asked her if she was running for Congress.”7

As noted, Babe Ruth couldn’t make the game but the all-star team Murphy joined was otherwise made up of American League ballplayers: Nick Altrock, Donie Bush, and “Sheriff” Earl Smith from the Senators; Tillie Walker, Pep Young, Frank Bruggy, Bob Hasty, and Doc Johnston of the A’s; Chick Shorten of the Browns; Ira Flagstead of the Tigers; Les Nunamaker and Jim Bagby of the Indians; Hervey McClellan of the White Sox; and Fred Hoffman of the Yankees. Every ballclub in the American League was represented. Murphy, of the Providence All Stars, started the game at first base, batting third in the order.

She was tested early on. The visitors, of course, were up first. Allen Russell was pitching for the Red Sox and he set down second baseman Pep Young and shortstop Donie Bush.

Lizzie Murphy then stepped into the box. Two outs, no one on base. She hit a grounder to Boston’s Johnny Mitchell at short and was retired. Mitchell, though, chose to showboat a bit throwing the ball first to the second baseman, Del Pratt, who then fired to “Tioga George” Burns at first. Boston Globe writer James O’Leary took him to task in his game story the next day: “It was rather ungallant of Mitchell to play it this way.”8

With Boston batting against Jim Bagby in the bottom of the first, McCarthy’s teammate McClellan chose to challenge her as well. On a sharp grounder hit to him at third base, he fielded it cleanly, but then deliberately held the ball until the last moment and then fired a rocket to Murphy. She caught it for the putout. Gregorich reports that McClellan walked over toward Donie Bush, nodded in the direction of first base and said, “She’ll do.”9

Murphy played just the one inning. The all-stars scored in top of the second. The Red Sox scored twice in the fifth, only to see the all-stars come back to tie it in the sixth. Nick Altrock cut the clowning, came in to pitch, and held the Red Sox scoreless for the final four innings, the visiting all-stars winning it 3-2 in 10 innings. Doc Johnston, who had taken Lizzie’s place at first, tripled in the winning run.

This was not a strong Red Sox team. In fact, they finished the 1922 season in last place, 33 games out of first, with a 61-93 record. No wonder, then, that the Globe‘s sports cartoon the next day depicted Lizzie Murphy making the play and one spectator calling to another, “Attaboy! Lizzie better than the Red Sox.”10 The Globe’s O’Leary declared, “Her performances were a revelation to the many of whom had not seen her before and her work amazed even the big league players.”11

The game featured a couple of noteworthy fielding plays and a situation in the seventh when the Red Sox hit two triples but couldn’t score. Mike Menosky tripled down the right-field line, but was soon picked off third by Altrock. Boston catcher Ed Chaplin followed with another triple, but was left stranded on third.

Altrock got the win. “It seemed difficult, before the game, to visualize a tight, well-played contest,” wrote Burt Whitman of the Boston Herald. “But it was a good game and each team tried to win.”12 The Post’s Paul Shannon gave Altrock credit for making the day a memorable success, a subhead on his column reading “Nick the Whole Noise.”13

4 John S. Dooley was involved with Boston’s American League franchise since before its inception in 1901. His daughter Lib Dooley was an enduring fan as well, and offered important encouragement to this author right from the start. John Dooley had witnessed the first night baseball game, in 1880. He helped secure the land on which Boston’s Huntington Avenue Grounds was built. A member of the Royal Rooters, he was present at the first World Series game ever played, against the Pittsburgh Pirates in 1903. Lib Dooley attended every Red Sox home game from 1944 until her final year, 2000. This author’s season tickets placed him about 12 rows behind her front-row seat.  See appreciations of both John Dooley and Lib Dooley in Red Sox Threads.