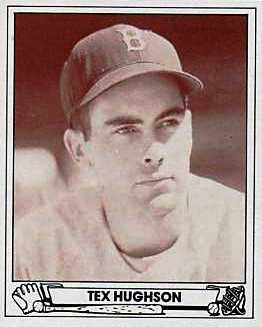 The Boston Red Sox had just come off the road after losing two games in Washington and splitting a pair against the Yankees in New York. Their record was 60-50 and they were in second place, 13½ games behind the Yankees. The Washington Senators came to visit Fenway Park for a Saturday afternoon doubleheader, the first game a makeup of a weather-postponed game from July 2. The Senators had won five games in a row.

Starting for the Red Sox was right-hander Tex Hughson (14-3), and he breezed through the top of the first inning, seeing fly balls distributed for outs to each of his outfielders: Dom DiMaggio in center, Ted Williams in left, and Lou Finney in right field.

Sid Hudson was the pitcher for Bucky Harris’s team from the District of Columbia. He was 8-10 for the seventh-place Senators. He gave up a leadoff double to DiMaggio. After DiMaggio moved to third on Johnny Pesky’s groundout, Hudson walked Williams to put runners on the corners with one out. But he retired Bobby Doerr and Tony Lupien to escape the threat unscathed.

Neither pitcher allowed a ball out of the infield in either the top or bottom of the second, each facing just three batters.

Rookie shortstop John Sullivan singled for Washington leading off the top of the third. A couple of fly balls and a groundout saw him get no farther than first base.

The Red Sox scored two runs — their only two runs of the game — in the bottom of the third. Hughson led off by flying out to center field. DiMaggio then hit one back to Hudson, who threw him out at first base. Pesky — a rookie like John Sullivan — singled to right field.

On a count of 0-and-1, Ted Williams “pulled an inside pitch powerfully into the right field bleachers, inside the foul pole.”1 A “solid swat,” wrote Shirley Povich.2 This was not what later became known as a “Pesky Pole” home run. Gerry Moore of the Boston Globe wrote that it “landed a dozen rows up in the right field extension.”3

It was Williams’s 25th home run of the season. The Red Sox had a 2-0 lead. Doerr popped up to short to end the inning.

Hughson had an adventurous top of the fourth. Center fielder Stan Spence singled. Third baseman Roy Cullenbine walked. Washington right fielder Bruce Campbell then singled to second base — but the ball struck the baserunner Cullenbine, who was thus out. Spence remained at second base and Campbell at first. First baseman Mickey Vernon grounded to shortstop and Campbell was forced at second base while Spence reached third. Jake Early, the catcher, flied out to right field, ending the inning.

An error by Washington second baseman Ellis Clary allowed Lupien to reach safely to lead off the bottom of the inning, but Finney hit a pop fly to Clary that he turned into a double play, catching Lupien off first base. Jim Tabor, Boston’s third baseman, flied out to right.

The Senators scored in the top of the fifth. With two outs, Hudson singled. So did left fielder George Case.

Spence doubled off the wall in left-center field. Hudson scored easily, but Case was tagged out on a throw from DiMaggio direct to Johnny Peacock at home plate.4 The play was apparently something of beauty: The ball went over Williams’s reach and struck the scoreboard in left-center. “Racing over from center, Dom not only played the carom perfectly, but his powerful peg cut down Case so clearly that the famed speedster did not even slide. …”5

That ended the inning, the Red Sox lead cut to 2-1.

The Red Sox went down in order in the bottom of the fifth.

There were some singles in the sixth. Campbell hit one with one out for the Senators but nothing came of it. With one out for the Red Sox, Williams and then Doerr singled, but Lupien hit into another odd double play like the one in the fourth inning, popping out to second base, with Doerr caught off first base.

Sullivan led off the Senators’ seventh with a double. He was tagged out at third base when Hughson pounced on a bunt hit in front of the plate by Clary.6 Shirley Povich wrote in the Washington Post that even the partisan Boston fans believed that Sullivan was safe and booed umpire Bill Summers for a bad call.7 Hudson singled — his second hit of the game — but Clary got no farther than second as Spence popped up and Case flied out.

Tabor’s single for the Red Sox was their only baserunner in the bottom of the inning.

Campbell walked in the eighth. No one else reached base. All three Boston batters grounded out, Hudson covering first base on a ball Williams hit to Mickey Vernon for the final out.8

Hughson saw Sullivan single — hit third hit of the game — to lead off the Washington ninth. He represented the tying run. Clary bunted, successfully sacrificing to push Sullivan into scoring position. Hudson was allowed to bat for himself. This time, though, he struck out. Case hit a fly ball to DiMaggio in center field and the game was over.9

Both pitchers worked compete games, in a game watched by 9,883 fans and taking 1 hour and 44 minutes.10 The Senators got 10 hits off Hughson, who won his ninth consecutive game and whose record improved to 15-3. By the end of the year, his first full years in the majors, he was 22-6, the 22 wins leading both leagues.11

Hudson allowed only six hits. DiMaggio’s leadoff double in the second and Williams’s two-run homer in the third were Boston’s only extra-base hits. Hudson had won his previous four games but now dropped to 8-11 and finished the season 10-17 with 19 complete games.12

Ted Williams’s two-run homer in the day’s first game proved the game-winner — the 22nd game-winning home run of his career, of the 106 he ultimately amassed.

4 Spence was 5-for-8 in the doubleheader.

7 Povich. Because Summers was working the bases alone as part of just a two-man crew, he was not in the best position, making the call from the mound, explained Moore.

8 The Senators used a defensive shift when Williams came to bat, moving three infielders between first and second, while the third baseman stood where the shortstop normally does. In 1946 Cleveland manager Lou Boudreau used the shift so frequently that it became known as the “Boudreau shift” and eventually the “Williams shift.” See Wheeler.

9 In the first inning of the second game, Case pulled off a steal of home plate.

12 There was a second game, which the Red Sox won, 7-6, on a walk-off one-out triple to the wall of the bullpen in right-center field by Lou Finney, hit with two on base. Boston had been losing 6-5, thanks to a tiebreaking run scored by the Senators in the top of the ninth. Finney’s triple scored Ted Williams with the tying run and Tony Lupien with the go-ahead run. Both had reached base on singles. Williams scores three of Boston’s runs, on a walk, a double, and a single. Bobby Doerr had a two-run homer in the second, after Williams walked, and drove home Williams with a single in the fourth.

13 The author often vents that the 1942 MVP went to New York’s Joe Gordon, who had half as many homers (18), drove in 34 fewer runs, and hit for an average that was 34 points lower with an on-base percentage that was 90 points lower. Gordon led the league in only two categories in 1942: strikeouts (95) and grounding into double plays (22). And he committed 28 errors. This season was one of several in which Williams had more homers (37) than strikeouts (27).