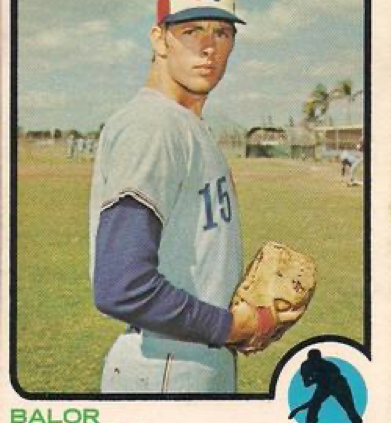 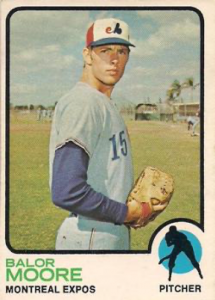 Exciting, well-played baseball action was in limited supply for fans of the expansion Montreal Expos and San Diego Padres in 1969. The two newcomers to the National League posted identical 52-110 records in their first seasons, finishing a combined 89 games out of first place.

Late in the season, though, teams of Expos and Padres minor leaguers in the Class A Florida State League faced off in what must have been one of the best-pitched and most exciting games of 1969 at any professional level. In the seven-inning first game of an August 18 doubleheader, the West Palm Beach Expos and Key West Padres collected a grand total of one hit – not one hit apiece, but one hit, period. West Palm Beach got the hit, scored the game’s only run, and claimed a 1-0 victory.

This matchup for the ages featured two very different starting pitchers – a bright prospect on the fast track to the majors, and a comparatively obscure player who was out of professional baseball less than a year later.

The hot prospect was West Palm Beach’s 18-year-old Balor Moore, Montreal’s first-round pick in the June 1969 draft out of high school in Deer Park, Texas. A left-hander with a live fastball, Moore was initially assigned to Montreal’s farm club in the Rookie-level Gulf Coast League, where he dazzled. In nine starts and 67 innings at that level, Moore went 7-0 with a microscopic 0.27 ERA. He led the league in strikeouts with 91 and tied for second in wins, despite making several fewer starts than most of the league’s other top pitchers.1

Convinced that Moore had nothing more to prove in the Gulf Coast League, the parent Expos promoted him to West Palm Beach for his last few starts. Moore lost his first game at that level, primarily due to his teammates’ sloppy fielding.2 He rebounded to shut out Key West on three hits in a “brilliant” performance in his home debut.3 “He might be moving pretty fast,” said Jim Fanning, Montreal’s general manager, discussing Moore’s bright potential.4

Moore’s opponent, Pat O’Brien,5 had starred at the University of Arizona, where his teammates included future big leaguers Eddie Leon, Rich Hinton, and Tim Plodinec.6 The Padres picked both O’Brien and Hinton in the secondary phase of the June 1968 draft.7 O’Brien pitched solidly in many respects for Key West in 1969. In 28 starts, including eight complete games, he went 10-10 with a 2.53 ERA, ranking fifth in the league with 150 strikeouts. He was also a gifted hitter, capable of playing the outfield. He hit .299 in 1969, including 16 appearances in nonpitching roles.8

Control on the mound was the lefty’s Achilles’ heel. O’Brien’s 126 bases on balls led the league, and his 16 wild pitches tied him for second.9 At 23, he was also relatively old for Class A ball; the average Florida State League pitcher in 1969 was a full two years younger. O’Brien was also building a life beyond baseball, having earned a degree in mechanical engineering. A news article in 1970 noted that he was studying for a master’s degree and had an IQ of 148, adding, “He probably will not stay in baseball.”10 After 37 games with Class A Lodi that season, he was released in early July, ending his professional career.11

Only 150 fans came to Key West’s Wickers Field on August 18, 1969, to see Moore and O’Brien face off. Neither team was truly in pennant contention. Manager Don Zimmer’s Padres were fourth in the six-team Southern Division with a 61-54 record, 9½ games behind first-place Miami. Ed Sadowski’s Expos were fifth at 45-67, 24 games out. Key West had swept a doubleheader from West Palm Beach the previous night.12

The junior Padres had two additional off-the-field distinctions. First, they are listed in Baseball-Reference as one of only two full-time, dedicated Padres farm teams for 1969, with the other being the Salt Lake City Bees of the Rookie-level Pioneer League.13 Second, their general manager was a 23-year-old former infielder named Mike Port, who had been released in March due to a chronically sore arm.14 Port worked his way up to become general manager of the California Angels and Boston Red Sox, as well as Major League Baseball’s vice president of umpiring.

The West Palm Beach team had three players, including Moore, who went on to the majors;15 a fourth who had already been there; and a fifth who missed the majors as a player but made it as a manager and front-office executive. The future manager started behind the plate that night. An 18th-round draft pick out of Florida’s Seminole State College, he was known at the time as John Reen. By the time he managed the 1989 Cleveland Indians for 19 games, then moved on to become general manager of the Indians and Rangers, he was known as John Hart.16

Only two members of the 1969 Key West team – pitchers Vic Albury and Leon Everitt – reached the major leagues, and neither appeared on August 18.17 The Padres’ catcher was Ronald Drake, a former University of Southern California athlete drafted at various times by the Cubs, Athletics and Padres. As a 22-year-old rookie, he hit .175 between Class A and Double A that season.

The offensive action, such as it was, took place in the top of the first. West Palm Beach third baseman Danny Sellers led off by drawing a walk, the first of only three issued by O’Brien that night. Second baseman Bruce Kinder reached on a fielder’s choice, with Sellers forced out at second. Kinder moved to second on a groundout by shortstop John Reid.18

First baseman Rick Summers was next. A former University of Texas athlete, Summers had played one season – 1966 – in the Mets organization before a bout with spinal meningitis and a back injury pushed him out of pro ball for two years.19 Playing a final season with West Palm Beach in 1969, he hit a scant .203 in 71 games. Possibly none of his 51 hits that season were as important as this one. He hit a clean single into center field to bring Kinder around with the game’s only run.

For the most part, that was it for the offense. Moore scattered three walks and hit one batter, Padres first baseman Guy Eargle. In only one inning – the second – did the Padres put two runners on base. According to a news account, Key West threatened Moore’s no-hitter only twice, both on balls that were tracked down and caught by Expos left fielder Vinnie Rispoli.20 Rispoli, who had attended the University of New Haven, was playing his only professional season, hitting .211 in 57 games.

Unlike some low-hit games, the pitchers did not blaze their way to high strikeout totals. Moore whiffed four batters and O’Brien five, which means their colleagues on defense had to do much of the work. For the most part, they fared well. The teams combined for only one error, by Key West third baseman Larry Evans.

Unfortunately, the Palm Beach newspaper’s game account does not give the details of the final out. The game wrapped up in 1 hour and 55 minutes and Moore threw 96 pitches, most of them fastballs. The win improved Moore’s record to 2-1, while O’Brien fell to 7-7.

Key West achieved a measure of revenge in the nightcap when righty Marvin Sherzer threw a two-hit shutout in a 3-0 win. The Padres’ bats awoke for a rousing four hits, highlighted by a two-run homer by left fielder Kenneth McGregor. Interestingly, both of Key West’s starting pitchers that day followed the same career trajectory. Like O’Brien, Sherzer played a final season for Lodi in 1970 and left pro baseball to pursue a master’s degree.21

Moore, in contrast, stayed on the fast track to the majors. Montreal called him up in mid-May of 1970, ignoring a pair of unsuccessful outings at Triple A. The 19-year-old went 0-2 with a 7.45 ERA in six major-league games before heading back down to the minors, where he stayed until 1972. Control problems and injuries kept him from realizing the potential he showed at West Palm Beach, and in parts of eight big-league seasons with three teams, Moore went 28-48 with a 4.52 ERA.

The story ends with an interesting parallel. Just as Moore no-hit a Padres farm team in their own ballpark, his lowest-hit complete game in the majors came against the San Diego Padres at San Diego Stadium. On July 23, 1972, Moore cruised to a 9-1 complete-game win, allowing just three hits and striking out 13.22 His 1969 West Palm Beach teammate Garry Jestadt appeared in that game for the Padres, striking out as a pinch-hitter in the eighth inning.23 And Don Zimmer, Key West’s manager in 1969, was San Diego’s manager in 1972.

Neither Baseball-Reference nor Retrosheet provides box scores of minor-league games, but the August 19, 1969, edition of the Palm Beach (Florida) Post published a box score.

Image of 1973 O-Pee-Chee card #211 downloaded from the Trading Card Database.

1 Most of the Gulf Coast League’s other leading pitchers appeared in anywhere from 11 to 16 games, compared with Moore’s nine. The exception was Indians farmhand John Howell, who went 6-1 with a 1.35 ERA, also in nine games. Howell peaked at Double A in a six-season career.

5 The pitcher is listed in Baseball-Reference as Robert P. O’Brien, but newspaper articles from his two-year professional career call him Pat.

8 O’Brien’s 1969 batting line in Baseball-Reference credits him with 44 games played; his pitching line credits him with 28 games pitched; and his fielding line lists him only as a pitcher. From this, one could extrapolate that he made 16 appearances as a pinch-hitter or pinch-runner – or that the fielding record could be incomplete. O’Brien played 13 games in the outfield with Lodi the following season. A 1970 news article (see note 10) described him as a “pitcher-outfielder.”

9 Interestingly, the pitchers who ranked second through fifth for bases on balls all made the major leagues. They were Roger Moret, Lynn McGlothen, and Vic Albury with 106 walks each, followed by Doyle Alexander with 100. Moret’s 21 wild pitches (in 25 games) led the loop.

13 In addition to the West Palm Beach team, the 1969 Expos also operated teams at the Rookie level and in the Florida Instructional League. As for the American League expansion teams, the 1969 Kansas City Royals are listed as operating eight minor-league affiliates and the Seattle Pilots four.

15 Besides Moore, the other Expos who later reached the majors were Garry Jestadt and Ernie McAnally. The player who had already been there was 25-year-old Joe Moock, who appeared briefly with the 1967 Mets.

16 Hart’s SABR biography, written by Rick Balazs, lists his birth name as John Henry Hart (son of John Hart Sr.) and mentions in passing that his parents separated, but does not specifically touch on his name change. An obituary for Hart’s mother, Anne Stratton Reen, mentions her marriage to US Air Force Colonel Patrick Reen. It appears that Hart took his stepfather’s name for a time before returning to his birth name. See: “Anne Stratton Reen” (obituary), Orlando Sentinel, October 7, 2014: B4.

17 Everitt pitched in five games for San Diego and pinch-ran in a sixth between late April and mid-May 1969, then was assigned all the way back to Class A. News stories indicate that Everitt pitched for the Padres in spring training 1970 and signed a contract with the organization in spring 1971. However, Baseball-Reference does not credit him with any professional appearances after 1969. In April 1972 The Sporting News reported that Everitt was driving a taxi in Los Angeles.

20 Baseball-Reference lists him as James Rispoli, but gives his full name as Vincent J. Rispoli. In news accounts from the 1969 season, he is called Vinnie Rispoli.

22 Moore also threw a three-hit complete game for the Expos against the St. Louis Cardinals on June 18, 1973, but that rain-shortened game was called in the sixth inning.

23 Jestadt played 63 games in West Palm Beach in 1969 but did not play in Moore’s no-hitter. News stories from August 1969 indicate he was playing for Triple-A Vancouver at the time. Jestadt made his big-league debut with the Expos in September 1969.