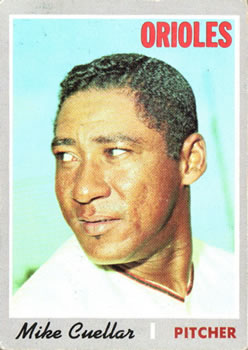 August 2, 1970, was a nice hot, sunny Sunday afternoon in Baltimore. The city, like the rest of the country, was in the middle of a dry spell. Sweltering heat brings bad moods, but as the 1970 progressed, the Orioles fan base had little to complain about – and certainly not when they played the Kansas City Royals.

The Orioles were coming off a World Series defeat by the New York Mets, a Series in which they had been heavily favored. After winning the first game, they lost four in a row to the underdog, Tom Seaver-led Mets. Despite having one of the best records in American League history (109-53) in 1969, the Orioles left New York with a bitter taste in their mouth, something they were looking forward to shake.1

The Baltimore faithful saw the second-year expansion Kansas City Royals meet up against their defending AL pennant-winning Orioles. With the young Royals and the American League defending champions, this was expected to be a one-sided matchup from the start.

The first time these two teams met had been on May 9, 1969, at Memorial Stadium, when Royals pitcher Dick Drago threw a complete game to lead his team to its first-ever win over the powerful Orioles. The Royals had done well in their first month, but that win by the upstart Kansas City team turned out to be a fluke. The Orioles proceeded to win that series, and every one of their next 22 games against the Royals.

On August 1, 1970, the Orioles were in first place in the AL East by 7½ games over the second-place Detroit Tigers. They were a powerhouse squad on their way to winning their second straight pennant. They were facing the Royals, already 27½ games out of first place in the AL West. The Orioles wanted to extend what seemed like a nearly impossible winning streak against a given opponent; the Royals were looking to stop the bleeding. Bob Lemon had taken over as Royals manager, replacing Charlie Metro after the season’s first 52 games.

The pitching assignments for the day had Baltimore ace Mike Cuellar face off against Jim Rooker of the Royals. From the start it was clear the Royals had their work cut out for them. After Cuellar got out of the first inning giving up only a hit to Cookie Rojas, the Orioles jumped on Rooker right away: The first five batters reached base, and Rooker was knocked out of the game before he could get a single out. The Orioles’ Merv Rettemund, Paul Blair, and Frank Robinson each reached base; Brooks Robinson singled in two runs and Curt Motton tripled in two more, making it a short day for Rooker. Al Fitzmorris replaced Rooker and gave up an RBI double to Davey Johnson. He then got three straight outs, but the Orioles found themselves up 5-0 after just one inning.

In the fourth, Kansas City got on the board. After Cookie Rojas doubled to start the inning, Royals All-Star Amos Otis smacked a two-run homer high over the fence in left to cut the Orioles lead to three runs. The 1969 Rookie of the Year, Lou Piniella, knocked a single, and the Royals looked to rally for more runs, but Piniella was picked off first base thanks to lefty Cuellar’s killer pickoff move. Bob Oliver struck out and Paul Schaal grounded out to Brooks Robinson at third to end what could have been a Royals rally.

In the bottom of the inning, the Orioles provided the type of play manager Earl Weaver loved.2 Paul Blair’s bloop single to center and Frank Robinson’s walk provided the baserunners for Curt Motton’s three-run homer to left that extended the Orioles’ lead to 8-2.

Given the great success the Orioles had enjoyed over the Royals since that first lone Kansas City win and with Cuellar on the mound, one might think that this game was essentially over. Cuellar had been 23-11 in 1969 and already had 14 wins in 1970. But this day, it seemed it might be different. The Royals truly wanted their losing streak to end.

In the top of the sixth inning, the Royals got back into the game, a far cry from games between these two teams in the past. They got their runs the old-fashioned way – with walks and hits. Three hits and two walks, with RBI singles by Piniella and Schaal, knocked Cuellar out of the game. He’d given up eight hits. Earl Weaver waved in Dick Hall.

As quickly as the Royals sliced the deficit to three runs, the Orioles came back for more. In the bottom of the sixth, Terry Crowley singled off first baseman Bob Oliver’s glove and Brooks Robinson reached on an error by Schaal. Motton moved both runners up with a bunt to the pitcher.3 After an intentional walk to Davey Johnson, Andy Etchebarren singled in two runs off Wally Bunker to extend the Orioles’ lead to five runs again. It was 10-5, Orioles, after six.

The Royals scored a run in the top of the seventh, although Cookie Rojas’s double-play grounder with runners on first and third cut short any Royals comeback.

Dick Hall seemed to be on his way to a long save, cruising his way to the ninth inning, but in the ninth, the Royals showed they were not just going to roll over. Consecutive hits by Billy Sorrell, Pat Kelly, and Rojas drove in two more runs and knocked Hall out. Into the game came Eddie Watt with Rojas on first base. But Watt got three straight force-play grounders to shortstop to get the save and extend the Orioles winning streak over the Royals to 23.

“The Royals threw a scare into the Orioles in the ninth inning of their final game of the season this afternoon, but that was all,” wrote the Kansas City Star.4

Rojas and Piniella each had three hits as the Royals outhit the Orioles, 13 to 12. The 10 runs the Orioles scored in the game matched the highest run total of any of the prior 22 wins. Curt Motton, who had come into the game batting .219, had five runs batted in for Baltimore, and his sacrifice in the bottom of the sixth had helped set up the ninth and 10th runs, the two that made the difference.5

What some expected might be an easy victory for the Orioles turned out to be closer than anyone would have thought after the first inning. A five-run deficit is hard to come back from, especially with a team that went on to win 109 games for the second season in a row . But the Royals did not go away lightly, knowing that this crazy losing streak to one team had to end.

“We’ll get them next year,” said KC’s Bob Lemon. What more could he say? He had said, perhaps a bit sardonically, “I thought maybe we’d score nine runs in the ninth, and then hold them.”6

Baltimore third baseman Brooks Robinson said, “I don’t think this will ever happen again. It seems impossible, even now.”7

“It’s hard to believe,” said right fielder Frank Robinson, “that one big-league club can beat another 23 times in a row. You have to be very fortunate, and have breaks go your way. The Royals have played us tough.”8

The Orioles won the World Series in 1970, beating the Cincinnati Reds in five games. The Royals wound up at 65-97, 33 games behind the Minnesota Twins in the AL West.

In addition to the sources cited in the Notes, the author consulted Baseball-Reference.com and Retrosheet.org. Thanks to Mike Huber for supplying several newspaper accounts of the game.