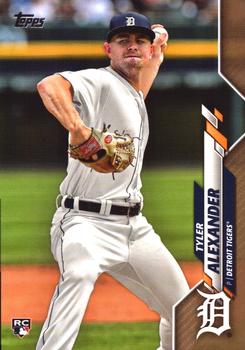 The Cincinnati Reds (3-5) were visiting the Detroit Tigers (5-4) for a three-game series. Yes, this was interleague play, but not the usual interleague schedule. With the 2020 COVID-19 travel protocols in place, the schedules were designed to create matchups that would minimize travel. AL Central teams like the Tigers played NL Central teams like the Reds. The season had started in late July, hence the low number of games played so far.

Cincinnati and Detroit were breaking new territory on August 2: It was the major leagues’ first doubleheader of 2020 with planned seven-inning games.1 To minimize the exposure risk to the players, all doubleheaders were mandated to be seven-inning games with a quick half-hour turnaround between games. With no fans in attendance the quick turnaround was feasible.

The Reds seemed to be jinxed by rain: The two-hour rain delay before the opener was their fourth rain delay of the week.2 At least with the heavy overcast, there wouldn’t be a glare from the reflections off the empty seats. Detroit had to tape over the silver number plates on the seats at the ballpark because the players were complaining about the glare.

Rony García (6.00 ERA) of the Tigers was making his second major-league start.3 He was only 22 when he debuted the previous week, pitching three innings against Kansas City. He had spent most of the 2019 season at Double-A Trenton, the Yankees affiliate, but was selected by the Tigers in the Rule 5 draft.4

The Reds leadoff hitter, Shogo Akiyama, worked the count full and walked. Nick Castellanos homered well over the center-field fence to give the visitors a quick two-run lead. García avoided further damage with a fly out, a groundout, and a strikeout.

In contrast to the Tigers’ rookie pitcher, Reds pitcher Anthony DeSclafani was a five-year veteran making his first start of the season. He made quick work of the Tigers: Niko Goodrum popped out and Jonathan Schoop and Miguel Cabrera lined out.

García managed a scoreless top of the second with some help from his defense. Christin Stewart made a sliding grab of Nick Senzel’s sinking liner. Josh VanMeter also lined toward Stewart — this time he made a leaping grab to prevent a base hit. After Freddy Galvis walked, Tucker Barnhart hit a broken-bat single into center, but Akiyama struck out to leave them on base.

DeSclafani worked another quick inning. Two lineouts and a groundout and he was back in the dugout. His pitch count stood at 17 after two innings.

Castellanos opened the third inning with his second homer of the game, this time into the second row of seats in right field. Perhaps influenced by the short-game situation, Tigers manager Ron Gardenhire changed pitchers to Tyler Alexander, who struck out Moustakas on five pitches. Eugenio Suárez and Jesse Winker struck out on three pitches each.

Jeimer Candelario was playing his sixth game of the 2020 season and looking for his first hit. He got it in the bottom of the third: a triple down the first-base line. It went to waste. Austin Romine hit a comebacker off DeSclafani’s backside. The ball bounced toward third, but DeSclafani jumped off the mound, retrieved the ball, and threw out Romine at first. JaCoby Jones was out on a fine fielding play by Galvis at short. Goodrum looked at strike three, leaving Candelario at third.

Alexander continued his sterling performance in the top of the fourth. Senzel was out swinging on the fourth pitch, VanMeter looked at strike three, and Galvis battled for eight pitches but struck out.

The Tigers couldn’t get anything going in the bottom of the fourth. Schoop grounded out, Cabrera hit a solid liner — right into the shifted shortstop’s glove. C.J. Cron thought he had a home run but it curved foul just before reaching the foul pole. He grounded out.

Barnhart was Alexander’s first strikeout victim of the fifth inning. Both he and Akiyama looked at strike three. When Castellanos swung at strike three, giving Alexander nine consecutive strikeouts, the 26-year-old left-hander walked off the mound with a huge smile and the record for consecutive strikeouts by a reliever.5 His record-breaking performance was announced to the empty ballpark — and on social media to fans everywhere.6

DeSclafani allowed singles to Stewart and Candelario in the fifth, but the Tigers were still unable to score.

Alexander took the mound in the top of the sixth with a chance to match, or exceed, Randy Johnson’s record of 10 strikeouts in a row.7 He came close. He had two strikes on Moustakas when he hit him with a pitch. Travis Jankowski ran for Moustakas so he could go ice his arm.8 Suárez was Alexander’s 10th strikeout of the game. Jankowski was caught stealing: Cincinnati challenged the out call but it was upheld. He may have beaten the tag but he lost contact with the base as he slid over it, so he would have been out anyway.

After Alexander walked pinch-hitter Matt Davidson, Carson Fulmer took over the pitching and gave up a single to Senzel on his first pitch. A wild pitch allowed both runners to move up. (The rain had restarted which could have been a contributing factor.) VanMeter struck out to end the frame.

Lucas Sims took over the pitching for the Reds as the rain continued falling. With two out, Cabrera smacked a base hit to left, passing Honus Wagner for 25th place in major-league history with 4,871 total bases.9 Sims walked Cron and grazed Stewart with a pitch to load the bases. Cabrera and Stewart were replaced by pinch-runners (Dawel Lugo and Travis Demeritte respectively).

Reyes hit a fly ball toward deep center. Castellanos, the right fielder, called for the ball and almost caught it a few feet from the center fielder, but it bounced off the end of his glove. Instead of an inning-ending catch, it was a three-base error; Lugo, Cron, and Demeritte all scored to tie the game, 3-3. DeSclafani later admitted thinking that the Reds had plenty of time to recover from Castellanos’ error — he had forgotten that it was only a seven-inning game.10

With Reyes at third as the go-ahead run, Cincinnati called on its closer, Raisel Iglesias. With Candelario batting, home-plate umpire Larry Vanover said something: “Time?” “Ball?” “Balk?” so Reyes came home with the apparent go-ahead run. But Vanover clarified that he had called “Time” as the pitch was thrown, and Candelario’s at-bat resumed. He flied out to strand Reyes.

The Reds took the lead for good in the top of the seventh. Joe Jiménez allowed a double to Galvis and a single to Barnhart. With Galvis on third, Akiyama hit a seeing-eye single, scoring Galvis. Jiménez induced a double play and a fly out to limit the damage to one run.

Iglesias earned his first win of 2020 with his pitching and his fielding. In the ninth he struck out Romine on three pitches. Jones’s hit bounced high off first baseman VanMeter, but right to Kyle Farmer at second.11 Farmer managed an off-line throw to Iglesias covering first. He caught the ball, stretched to touch the bag for an all-important second, then lost his balance and was nearly stepped on by the runner.

Cincinnati looked at the play but didn’t challenge. Iglesias was unfazed: He struck out Goodrum to end the game.

The Reds completed the doubleheader sweep with another seven-inning win in the nightcap. Trevor Bauer, who would win the NL Cy Young Award in 2020, held the Tigers to two hits in a 4-0 win.

If Detroit had won the opener, it is likely the official scorer would have awarded the win to Tyler Alexander as the most effective reliever. As it was, he had to settle for breaking the record and sending his cap to Cooperstown.12

In addition to Baseball Reference, Retrosheet, and the sources listed in the Notes, the author viewed the recorded game on MLB.com and consulted a Tigers fan.

1 Under the 2020 COVID-19 protocols agreed to by Major League Baseball and the players, doubleheaders would be seven-inning games to minimize the time players would spend at the ballpark. Seven-inning doubleheaders were commonly used in the minor leagues before 2020. It had been over a century since a doubleheader was played with two less-than-nine-inning games. Back on September 19, 1912, the Boston Red Sox and the Cleveland Naps played a doubleheader of five and six innings. That had not been planned in advance: The first game was called on account of rain, the second on account of darkness. There was also a rain delay.

2 They had tried moving the previous day’s game up five hours to avoid the predicted rain. Mother Nature had other ideas: It rained early and they still had to move the game to Sunday, triggering the first application of the 2020 COVID-19 doubleheader rules. Bobby Nightengale, “Ready to Make History,” Cincinnati Enquirer, August 2, 2020: 1C.

3 These were his only two starts in 2020. After this game he was used only as a reliever.

4 Under the rules applicable to the Rule 5 draft, a player selected must remain on the team’s 40-man roster or be offered back to his original club. The Tigers selected him expecting that he was ready to contribute at the major-league level. Chris McCosky, “‘Very Good Arm’: Tigers Take RHP Rony Garcia from Yankees’ Organization with Rule 5 Pick,” detroitnews.com, December 12, 2019. detroitnews.com/story/sports/mlb/tigers/2019/12/12/detroit-tigers-take-rhp-rony-garcia-new-york-yankees-organization-rule-5-pick/4408756002/. Accessed January 18, 2021.

8 He did not play in the second game of the doubleheader but did return to the lineup the next day.

9 By the end of the 2020 season, he had also passed Ted Williams and Derek Jeter to finish at number 23 on the all-time total-base list with 4,942 total bases.

11 Farmer had replaced pinch-runner Jankowski in the bottom of the sixth.