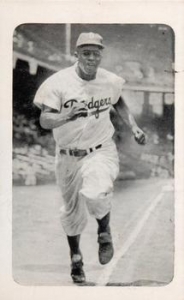 A crowd of 25,762 showed up at Ebbets Field on August 20,1947, to see the final game of the Dodgers’ four-game series against the St. Louis Cardinals. Overcast skies delayed the game for 47 minutes.

After winning the first two games of the series, Brooklyn had lost the third game, 11-3. The Dodgers still had a comfortable six-game lead over the Cardinals, but fans hoped to see them extend that lead, especially after the Cardinals had shown no kindness to Jackie Robinson throughout the series.1

Ralph Branca started for the Dodgers. The right-hander entered the game with a 17-9 record. Branca had pitched six solid innings in his last appearance but failed to get a win when the Dodgers couldn’t hold their lead after he was removed for a pinch-hitter.

Branca looked solid from the start. The Cardinals got just three baserunners through the first seven innings. Branca hit Stan Musial with a pitch in the first. Musial was stranded there when Branca got the next batter to hit a weak groundball to first.

In the second, Branca walked Whitey Kurowski but not before he brushed him back. (Kurowski claimed he had been hit by the pitch.) Branca struck out the next two Cardinals and Kurowski was left stranded.

Branca walked Kurowski again in the fifth. This time he got Marty Marion to hit into a double play to clear the bases before striking out Del Wilber for the final out.

Murry Dickson took the mound for St. Louis. Dickson entered the game with a 9-12 record after losing his last outing, a 5-3 loss to the Pittsburgh Pirates. After getting the side out in order in the first, he gave up a double to Dixie Walker in the second. Walker remained there when Dickson got the next two Brooklyn batters out with relative ease.

The Dodgers dinged Dickson for a run in the third. A two-out single by Eddie Stanky followed by a double by Jackie Robinson gave the Dodgers the lead, 1-0.

Branca and Dickson matched each other over the next four innings. As Dickson hoped for some offensive help from his teammates, Branca maintained his no-hitter and the Dodgers clung to their one-run lead. Brooklyn added an insurance run in the eighth.

Ted Wilks had come in from the bullpen after Dickson was removed for a pinch-hitter in the top half of the frame. Stanky led off with a double to left. Robinson laid down a bunt and was safe when Wilks kicked the ball as he tried to grab it.

Howie Pollet replaced Wilks. Pete Reiser grounded into a double play but pushed Stanky to third. Pollet intentionally passed pinch-hitter Carl Furillo. Walker then “drew the cheers of his large constituency by lining a single to center to score Stanky.”2

Branca entered the ninth needing just three more outs to secure a one-hitter and his 18th win. It would be the second time he shut out the Cardinals, after having pitched a one-hitter against them on July 18. Dodgers fans were on their feet as they watched “big Branca on the hill, dominating, strong and determined.”3

After Branca walked Red Schoendienst to lead off the ninth, he retired the next two batters on groundouts and the Cardinals’ “cause looked darker than the overcast skies” in Brooklyn.4

Enos Slaughter stepped to the plate. After getting ahead of Slaughter 1-and 2, Branca couldn’t find the plate. Slaughter walked and the Cardinals had runners at the corners. Pitching coach Ray Blades  “rushed out to have a calm-down confab with the young ace. [Branca] nodded reassuringly. He was all right. But he wasn’t.”5

“[H]ome plate started jumping around on Branca”6 and his first two pitches to Ron Northey were balls. Dodgers manager Burt Shotton determined that Branca had reached his limit and called in Hugh Casey to finish the game.

Northey banged a single to just to the right of second base. Pee Wee Reese dived in a desperate attempt to catch the ball but came up short. Schoendienst scored and Slaughter ended up on third. Chuck Diering ran for Northey.

Kurowski then “slapped a grounder of only fair speed toward third – a cinch out at first or second base.”7 Spider Jorgensen fumbled the ball and then couldn’t find the handle to make the throw. By the time he did, the runners were safe and Slaughter crossed the plate with the tying run.

Brooklyn went down in order in the bottom of the ninth, and the game went into extra innings.

After Casey got the Cardinals out in order in the top of the 10th, the Dodgers had a chance to win in the bottom of the inning. But they couldn’t bring a runner across the plate safely. Stanky opened with a single. He advanced on Robinson’s sacrifice. Pollet intentionally walked Reiser.

With one out, Furillo sent a rocket into right field that had “Stanky heading for pay dirt. Diering charged the ball like an infielder, scooped it up and made a perfect throw to nail Stanky.”8 Stanky made his best effort to break up the play, climbing “all over the St. Loo backstop and [sending] him sprawling but [Del Wilber] held on to the ball for the big out.”9

Casey gave up a leadoff single in the 11th but then retired the next three Cardinals. The second of the three, Enos Slaughter, hit a grounder to Robinson. Jackie hesitated for a moment to see if he might get a force out before stepping on first.

Slaughter’s foot landed on Robinson’s right foot, “which was not on the bag but against it. Jackie hopped around for a minute or so … but stayed in the game.”10 The Dodgers claimed that Slaughter was intentionally trying to spike Robinson. Robinson’s career “came within an inch of being ended, as Red Barber and others declared.11

Robinson said after the game, “All I know is that I had my foot on the inside of the bag. I gave Slaughter plenty of room.” Slaughter defended himself, saying, “I’ve never deliberately spiked anyone in my life. Anybody who does don’t belong in baseball.” Stanky told reporters, “Not until this year has Robinson [had] to duck a ball thrown by one of our pitchers. So you must be sure that it was no accident when Enos spiked him.”12 In his 1972 autobiography, Robinson wrote, “Slaughter deliberately went for my leg instead of the base and spiked me rather severely.”13

Tommy Holmes of the Brooklyn Daily Eagle described the incident this way: “No one can read Slaughter’s North Carolina mind but the crowd unanimously decided to believe that he was curious to see how Robinson would look with one leg.”14

In their half of the 11th, the Dodgers had their second chance to reclaim victory. Bruce Edwards led off with a walk and was sacrificed to second by Eddie Miksis.

But that was as far as he got. After Reese was given an intentional walk, Shotton decided to let pitcher Casey bat instead of using a pinch-hitter. The Dodgers manager had “done the same thing in St. Louis early this season and Casey had brought him out on top.”15 His veteran reliever didn’t have the same magic this afternoon and struck out.

When the Cardinals came to bat in the 12th, Kurowski was at the plate again. He sent Casey’s first pitch sailing into the left-field stands, a “mean blow into the teeth of a wind,”16 to give St. Louis a 3-2 lead.

The home run was Kurowski’s 22nd of the season, a new record for him, and his third home run in three days. Roscoe McGowen of the New York Times wrote that Kurowski was “strictly poison to the Dodgers” in the series.17

The Dodgers made “one last exciting effort for the lucky fans.”18 Robinson led off the bottom of the inning with a single to center. Reiser sacrificed him to second.

Cardinals manager Eddie Dyer replaced Pollet with right-hander Red Munger to face Furillo, “who eats southpaws on the half shell.”19 Shotton countered by sending left-hander Arky Vaughan up to bat.

Before Munger could throw his first pitch, he “wheeled and threw to Marion, racing over to second base.” Robinson couldn’t get back fast enough and was tagged out.

Three pitches later, Vaughan grounded to Musial at first for the final out. As the teams left the field, Kurowski ran over to Slaughter to “steer him away from a fan behind the Cardinal dugout who apparently was digging in with a sharp set of spurs.”20

The Cardinals victory split the series and they left Brooklyn in the same place, five games behind, as when they arrived. But even more importantly, they left with their “contempt for the Dodgers reestablished.”21 There had been rumors early in the season that the Cardinals would go on strike if they had to play against Robinson. The strike never materialized but hard feelings clearly still existed.

1 Cardinals outfielder Joe Medwick spiked Robinson on the left foot, leaving a bloody gash in the opening game, according to Jules Tygiel in Baseball’s Great Experiment (New York: Oxford University Press, 1983), 202-203. Arnold Rampersad in his book Jackie Robinson recounts another incident, involving Cardinals pitcher Harry Brecheen. Brecheen, “rather than throw Jack out easily at first, took the ball to the baseline clearly intending to block his path with a nasty tag. Jack stopped short of Brecheen. “You better play your position as you should,” [Robinson] warned: the next time he would not hesitated to knock him over.

12 “Intentional Accident Says Stanky, Accident Says Slaughter,” The Sporting News, August 27, 1947: 4. Although this incident received a lot of press, it was the not the only time the two players crossed paths in an adversarial way. Slaughter later told this story to Larry King: After the spiking incident on August 20, Robinson’s response was simply to say, “I’ll remember that.” In another game, about two years later, Slaughter hit a single so sharply that it hit off the wall and he tried to stretch it into a double. Slaughter said to King: “Robinson was playing second then. I went sliding in, and Robinson took the throw from the right fielder. He made no attempt to tag me on the leg for the putout: which he could have done easily. Instead he whirled around and smacked me in the mouth with the ball in his glove. Six teeth went flying, there was blood all over me, and I later had to have gum surgery. As he walked away, Jackie said, ‘I told you I’d remember.’” Richard Smith, “Jackie Robinson and a Revenge Best Served Cold,” Psychology Today, April 3, 2018. psychologytoday.com/us/blog/joy-and-pain/201804/jackie-robinson-and-revenge-best-served-cold. Smith gives as the source Larry King and Peter Occhiogrosso, Tell It to the King (New York: Simon and Schuster, 1998).

14 Holmes. Sportswriters disagreed as to whether the spiking was deliberate. Bill Corum of the New York Journal-American called it “as normal a play as anybody, whose imagination wasn’t working too fast, ever saw.” Bob Burnes, in the St. Louis Globe-Democrat argued, “If Slaughter had been trying to ‘nail’ Robinson, you can be sure Jackie wouldn’t have been in condition to stay in the game.” Slaughter’s statement “I’ve never deliberately spiked anyone in my life. Anybody who does, don’t belong in baseball,” probably surprised most National Leaguers. The incident infuriated Robinson’s teammates. Noting that the cut on his leg was located eight inches above the ankle on the outside of his leg, one player asserted, “How the hell could Slaughter hit him way up on the side of the leg like that unless he meant to do it?” Tygiel, 202-203.