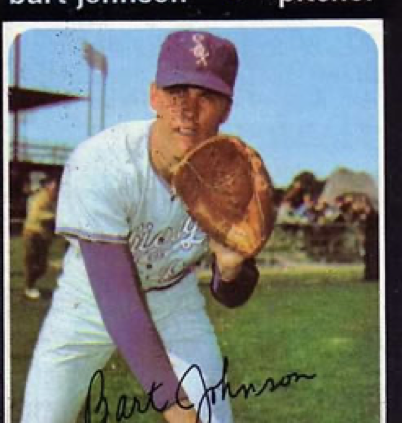 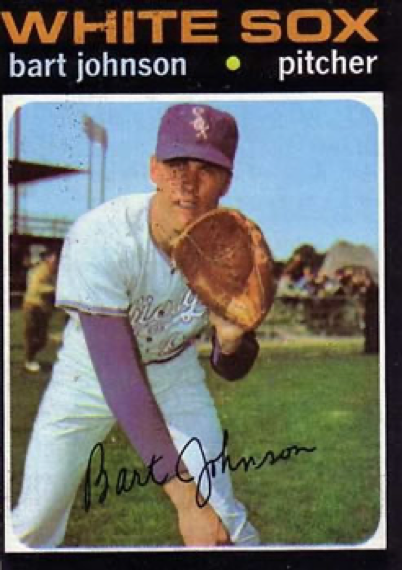 One of the many legends surrounding Babe Ruth involves Johnny Sylvester, a sick young boy who, lore says, asked the Babe to hit a home run for him in 1926. After sending a promise to “knock a homer for you on Wednesday,” Ruth hit three homers in Game Four of that year’s World Series.1 The details of Sylvester’s illness remain unclear, and there’s certainly no proof that Ruth’s hitting played any part in his recovery, but the once-ill boy is known to have grown to adulthood and lived until 1990.2

That’s probably the most famous example of a ballplayer apparently drawing on-field inspiration from a sick child. But it’s not the only one. Take the afternoon in 1970 when a Chicago White Sox pitcher stepped to the plate in a clutch situation with his teammate’s severely ill child in mind, swung for the fences … and hammered the game-winning hit.

Only 5,367 fans turned out at White Sox Park for an overcast Saturday-afternoon matchup of the White Sox and New York Yankees on August 22, 1970. The White Sox didn’t give fans much reason to show up that season. They came into the game with baseball’s worst record at 44-82, 31½ games behind the first-place Minnesota Twins. The White Sox had lost 10 of their previous 12 games, and their poor showing cost manager Don Gutteridge his job less than two weeks later. The team averaged under 5,900 fans per home game and drew only 495,355 the entire season, easily the fewest in the major leagues.3

Gutteridge’s choice of starting pitcher offered fans hope. Twenty-year-old Bart Johnson, making his 10th appearance of 1970, brought an unpromising 1-3 record and a 6.63 ERA into the game. But the lanky young right-hander had feasted on the Yankees just 10 days earlier, pitching six strong innings for the win and collecting his first three hits of the season. Johnson earned his first call-up in 1969 after leading the Class A Midwest League in strikeouts, and 1970 season previews described him as a “sleeper” candidate to help the team.4

Behind the scenes, a heart-tugging situation had developed in the White Sox clubhouse involving outfielder Walt Williams, a favorite among teammates and fans for his hustle and upbeat attitude.5 Williams’s 7-week-old son, Tyrus, had been admitted to Chicago’s Mercy Hospital the previous day with a spinal infection. Johnson felt special concern about the critically ill child, as his own daughter was roughly the same age.6

In the visitors dugout, Ralph Houk’s Yankees were again playing competitive baseball after several lost years. New York entered the game in second place in the American League East with a record of 68-54 with one tie, 10½ games behind the eventual World Series champion Baltimore Orioles.7 Houk gave the start to righty Stan Bahnsen, who was the AL Rookie of the Year and The Sporting News’ AL Rookie Pitcher of the Year in 1968. Bahnsen had an 11-8 record and a 3.30 ERA. He had faced Johnson on August 12 and took the loss after giving up three runs in seven innings.

Two other names in the Yankees’ starting lineup deserve note. Bahnsen’s batterymate, Thurman Munson, brought a .286 average into the game. Closing the season at .302, he followed in Bahnsen’s footsteps by winning the 1970 AL Rookie of the Year Award. Also, Yankees shortstop Frank Baker, a lefty-swinging Mississippian, was playing in just his 11th major-league game after making his debut on August 9.

The first inning passed uneventfully. In the second, New York got two runners on board — the first on a single, the second on a fielder’s choice. But the inning ended when White Sox catcher Duane Josephson threw out Yankees right fielder Jim Lyttle trying to steal second.

The Yankees threatened again in the third when Baker and third baseman Jerry Kenney drew inning-opening walks and moved up on a passed ball. Johnson once again escaped the jam: He struck out Bahnsen and got second baseman Horace Clarke on a liner to shortstop Luis Aparicio, who caught Kenney off second and touched the bag for a double play.8

Two Yankees mainstays gave the team a brief lead in the fourth. With one out, left fielder Roy White singled. Center fielder and cleanup hitter Bobby Murcer followed with a home run to right field, his 20th of the season, to make the score 2-0.

New York gave back the lead in the bottom half. Third baseman Syd O’Brien led off with a single to right field. One out later, left fielder Carlos May grounded a hard ball off Bahnsen’s leg. The pitcher recovered the ball near the first-base line, but made what one reporter called a “foolish throw” from a sitting position. The throw went awry, allowing the runners to take second and third.9 After Bahnsen retired right fielder Bill Melton on a popup to second, Josephson singled to center to drive in O’Brien and May. First baseman Gail Hopkins grounded back to Bahnsen, and the pitcher handled it for the third out, but the White Sox had tied the game at 2-2.

Each team put a baserunner aboard in the fifth but did not threaten. Another fielding error gave the Yankees a chance in the sixth, when the speedy White walked, stole second, and continued to third on an error by Josephson. But Murcer struck out and Danny Cater flied to Melton to end the inning.

Around this point in the game, Williams — who was not in the lineup — received permission to leave the ballpark and go to the hospital where his son was receiving treatment.10 A fielding miscue handed the White Sox an opportunity in the seventh. With one out, Chicago center fielder Ken Berry singled to left. Second baseman Bobby Knoop hit what appeared to be an inning-ending double-play ball. But the ball stuck in rookie Baker’s glove, and by the time he got it out, he had to settle for the force at second.11 The New York Daily News’s Dick Young noted that Baker was mired in an 0-for-14 slump and suggested it was affecting him in the field.12

This brought Johnson to the plate with two down, a runner on first, and Tyrus Williams in his mind. Johnson admitted later that he was “trying to hit the ball out of the park” to win the game.13 And he almost did, lacing a Bahnsen pitch off the fence in left-center field, the deepest part of the ballpark, for a double. Knoop scooted home on Johnson’s first big-league extra-base hit to give the White Sox a 3-2 lead.

The eighth passed quietly, but the Yankees put up a fight in their last time up. With one out in the ninth, Murcer doubled to center field — New York’s fourth hit, and its first since Murcer’s fourth-inning homer. Cater grounded to Aparicio and was safe when the shortstop bounced the throw for an error, putting Yankees at first and second.14

Gutteridge turned to his bullpen, beckoning lefty knuckleballer Wilbur Wood. Beginning in 1971, Wood became a nearly indefatigable starter, regularly notching more than 40 starts a season. But in 1970 he was a nearly indefatigable reliever, leading the AL with 77 appearances.15 Wood got pinch-hitter Ron Woods to pop to right field, then retired a second pinch-hitter, John Ellis, on a line out to left field. The game ended in 2 hours and 2 minutes, with Johnson earning his second win, Bahnsen taking his ninth loss, and Wood collecting his 16th save.

An emotional Johnson said after the game, “I won the game for Walt’s son. That’s all there is to it. … I had it in mind all the time to win for him.” Gutteridge praised Johnson’s performance, adding, “I wanted him to get a complete game, but I wanted the victory worse.”16 The New York press, meanwhile, focused on Johnson’s dominance of the Yankees. The New York Times noted that the pitcher was winless in three decisions and hitless in eight at-bats against the rest of the league, but had a 2-0 record and a 4-for-6 batting line against New York.17

Tyrus Williams, diagnosed with spinal meningitis, survived his critical illness in August 1970 but was left blind. The following year, White Sox players and fans donated money to a fund to support him. Unfortunately, he died in January 1973 at the age of 2½.18

In addition to the specific sources cited in the Notes, the author used the Baseball-Reference.com and Retrosheet.org websites for general player, team and season data and the box scores for this game:

The author thanks Jacob Pomrenke for his research assistance.

Image of 1971 Topps #156 downloaded from the Trading Card Database.

4 Marty Ralbovsky, “11-Chicago, AL West,” Wausau (Wisconsin) Daily Herald, March 12, 1970: 34. This season preview also mentions Paul Edmonson, a White Sox pitcher who died in a car accident on February 13, 1970. Presumably, the piece was written well in advance and was incautiously edited by the Daily Herald and other papers that printed it unchanged after Edmonson’s death.

7 The 1970 Yankees closed the season in second place with a record of 93-69 and one tie. In other seasons, that performance might have put them in the pennant chase. Instead, they — and everyone else — were left in Baltimore’s wake as the Orioles went 108-54, closing 15 games ahead of New York.

17 Murray Chass, “White Sox Rookie Again Tops Yanks,” New York Times, August 23, 1970: S1. The New York papers also buzzed about the news that Mickey Mantle had agreed to return to the Yankees as a coach for the final month of the season.