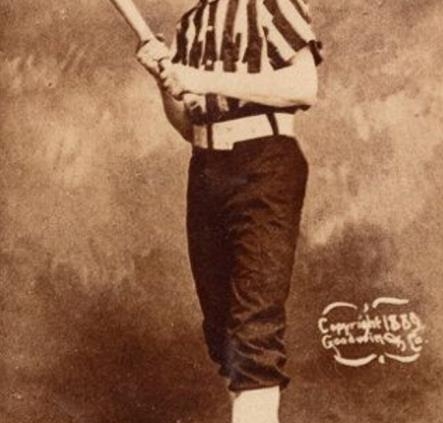 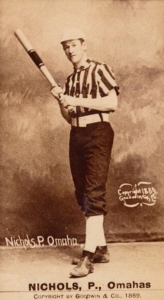 Located 100 miles apart along the Missouri River, Omaha, Nebraska, and Sioux City, Iowa, were natural rivals in baseball. Friday, August 23, 1889, was Ladies’ Day at Omaha’s Base Ball Park1 for the first game of a three-game series between the Omaha White Sox and the Sioux City Corn Huskers. The White Sox were atop the Western Association standings with a 61-28 record. The Corn Huskers, with a 45-45 mark, were in a tie for third place in the eight-team league.2 Their records were much improved from 1888, when Omaha finished in fourth place and Sioux City landed in sixth.3

Ladies’ Day meant the stands were replete with colorfully attired women and “their feathers and ribbons and smiles.”4 Girls, too, were there, which irked the boys:

“And just think of it! Girls are permitted to go through the gates without paying anything. It does not cost them a cent and boys have to give their quarters and half dollars. … Of course, a great many boys are enterprising enough to work for the privilege of watching the exciting games but every boy without pocket money can’t peddle score cards, chewing gum or lemonade.”5

The White Sox were managed by Frank Selee and featured a superb two-man pitching rotation: right-handers William “Dad” Clarke and Charles “Kid” Nichols. It was Nichols’ turn to pitch. Though only 19 and in his third professional season, he was regarded as the finest pitcher in the league.6 His extraordinary record, through games of July 28, was 28-4.7 Omaha’s newspapers described a poised youngster who “never gets rattled” and “is cool and collected at all times.”8

Only two members of Selee’s starting lineup had any major-league experience: first baseman Wally Andrews and right fielder Joe Strauss. In contrast, seven of nine starters for the Corn Huskers were former major leaguers, including first baseman and manager Jim Powell, third baseman George Bradley, and pitcher Billy Crowell. Bradley, at 37, was the oldest; back in 1876 he pitched the first no-hitter in National League history. Crowell, a 23-year-old right-hander, had compiled a 19-45 record over two seasons in the major-league American Association.

Among the Western Association batting leaders were Jack Crooks of Omaha and John “Monk” Cline of Sioux City. Through games of July 12, both men were hitting above .350.9 Crooks had belted four home runs and a single on June 8 in a 19-15 triumph over St. Paul.10 He was known also for his fielding – he covered “an immense amount of territory” at second base11 – and for his foghorn voice which could be heard throughout the ballpark.12 Cline was a short (5-foot-4) shortstop, but what he “lacks in height he neutralizes by the expansiveness of his smile.”13 His countenance was never brighter than when he won $5,000 (equivalent to $150,000 in 2022) in Louisiana’s August lottery.14

The White Sox wore uniforms that were, in the words of a local newspaper, “new, neat and novel”: “white flannel shirts, with navy blue stripes, navy blue pants, white caps [and] belts,” and fittingly, white socks.15 The Corn Huskers donned “suits of gray flannel” with black caps, belts, and socks.16 Herman Doscher, in white flannel, was the sole umpire. A former player and umpire in the majors, Doscher was “a gentleman of excellent judgment and acquainted with every wrinkle of the great American game.”17

Many fans rode cable cars to the ballpark. This “swiftly gliding” conveyance was preferred over the sluggish old “horse cars” (horse-drawn streetcars).18 Attendance was reported to be nearly 1,500, including several hundred women.

The White Sox batted first and had men on base in each of the first two innings but did not score. Leading off the third, Nichols reached on an error by manager Powell at first base, and Jimmy Cooney stroked a single to left. The bases were loaded after an error by Tim Brosnan, the second baseman, and Joe Walsh’s single brought Nichols home with the first run of the game.

In the top of the fourth, Omaha’s Jim Canavan reached on a force out and stole second base, but he was thrown out trying to steal third. That was unfortunate, because Nichols followed with “a rattling two-bagger.”19 It was another missed opportunity for the home team.

Nichols looked invincible as he retired the first nine batters he faced. But the Corn Huskers came to life in the bottom of the fourth. Cline singled and came home on Ed Glenn’s double to right field. Glenn moved to third on an infield out and scampered home when catcher Tom Nagle missed the third strike on Brosnan, giving Sioux City a 2-1 lead.

Canavan’s triple in the sixth inning brought in the tying run for the White Sox. The game was now a pitchers’ duel, “close and exciting,” keeping everyone “in a constant state of feverish anxiety.”20

The tie was broken in the top of the ninth. With the bases empty, Nichols stepped to the plate and drove the first pitch from Crowell deep into the left-field corner. The ball landed inside a chicken coop! No ball had ever been hit there before. Nichols circled the bases for a home run as fans showered him with silver dollars, halves and quarters. “He deserved every cent he received,” declared the Omaha Republican.21

The Corn Huskers could not score off Nichols in the bottom of the ninth. The final score was Omaha 3, Sioux City 2. Nichols was the hero of the game, excelling as a pitcher and a hitter.

In his complete-game victory, Nichols struck out 10 and allowed only three hits. He received excellent support from his defense. Crooks, at second base, made “a great one-hand catch of a hot liner” in the fifth inning.22 And Walsh, the shortstop, was credited with five assists; he was “marvelous” and “never played a better game.”23

The White Sox also defeated the Corn Huskers in both the second and third games of the series. Nichols threw a two-hitter in the final game.24

Omaha went on to win the 1889 Western Association pennant. Sioux City finished in fourth place.25 Nichols’ season record was 39-8 with a 1.75 ERA and 368 strikeouts in 438 innings. He spent the next 12 seasons with the Boston Beaneaters of the National League, with Selee as his manager. Over that span, Nichols compiled a 330-183 record and the Beaneaters won five pennants. In 1949 he was inducted into the National Baseball Hall of Fame.

Game coverage in the August 24, 1889, issues of the Omaha Daily Bee, Omaha Republican, and Omaha World-Herald.

1 Omaha’s Base Ball Park was located at Twentieth and Ohio streets, according to: “Places of Amusement,” Omaha Daily Bee, September 4, 1888: 2. Women and girls were admitted free on Ladies’ Days.