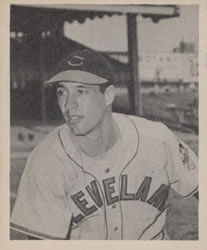 Bob Feller’s return to major-league baseball after 44 months in the Navy and eight battle stars couldn’t have gone much better as he pitched a complete-game 4-2 victory over the Detroit Tigers, striking out 12 in a brisk 2 hours and 17 minutes. It was a much-anticipated event which, once Feller got his release orders, happened quickly. He was discharged from the Navy on August 21 at the Navy Pier in Chicago1 and late that evening flew with his wife, Virginia, to Cleveland, arriving at 2:30 A.M. to a gaggle of reporters and photographers.2

On August 23 Feller signed a contract with the Indians for about $40,000 a year after a brief meeting with club vice president Roger Peckinpaugh.3 He then proceeded to the Indians’ clubhouse and put on his uniform with his old number 19, which had not been worn by another Cleveland player in his absence. With cameras seemingly tracking his every move, Feller went through a long workout, including a throwing session under the watchful eye of pitching coach George Susce.4

Indians manager Lou Boudreau announced that Feller would be starting the next day and, according to The Sporting News, Cleveland newspapers treated the story “almost as if it were another V-J Day.”5 One Cleveland headline read, “This Is What We’ve Been Waiting For!”6 The city hastily put together a luncheon in downtown Cleveland in Feller’s honor that drew 1,000 guests, including Ohio’s governor and Cleveland’s mayor, but turned away scores of others due to space limitations.7 Feller was asked to give remarks and told the crowd to not forgot the men in the Pacific who were never coming back and assured them that he would not.8 Detroit’s manager Steve O’Neill, whose team Feller would face that evening, was also present and joked to the crowd that he’d wished he had “given Bob’s wrist a firm twist” when shaking hands before the event.9

When Feller walked into the Indians’ clubhouse late that afternoon, he could count just eight teammates who had been with the club in 1941, when he had last pitched.10 With over 45,000 in attendance, Feller received a hero’s welcome in pregame ceremonies, punctuated by Cleveland great Tris Speaker’s presentation to him of a new Jeep for use on his Iowa farm. His teammates gave him an engraved pen and pencil set and pitching legend Cy Young came up from his Paoli, Ohio, farm for the occasion.11 After the presentations, a band, a number of World War I veterans, and every member of both teams paraded out to the flagpole in center field for a stirring rendition of the National Anthem.12

The fifth-place Indians had no thought of transitioning Feller back to the big leagues gradually. Not only were the Tigers in first place, but Feller’s mound opponent was Hal Newhouser, who had already won 20 games and was considered the best pitcher in the major leagues.13 But although Feller had more than two years at sea on the USS Alabama, he had been stationed at the Great Lakes Naval Training Station in Illinois since March 20. There he had thrown more than 100 innings for the powerful Great Lakes Bluejackets baseball team and had won nine games against two losses, including a no-hitter against a semipro team and a 1-0 three-hit shutout against the Chicago Cubs, who would win the 1945 National League pennant.14

After the festivities, Feller began the game in typical fashion, striking out Tigers leadoff hitter Jimmy Outlaw. He then retired Red Borom on a fly ball to center field before allowing a long triple to Doc Cramer. Feller got out of the jam by reaching back and striking out Tigers cleanup hitter Hank Greenberg, who in July had himself returned from military service. In the bottom of the first, Mickey Rocco singled and Pat Seerey got the Indians off to a fast start by clubbing a two-run homer to put the Tribe ahead, 2-0.

After sailing through the second, Feller ran into trouble in the third, allowing a leadoff double by Paul Richards, a walk to Outlaw, and RBI singles by Borom and Cramer that tied the score. Roy Cullenbine drew a two-out walk to load the bases, but Feller retired Rudy York on a fly ball to left fielder Jeff Heath to keep the score level. The Indians quickly struck back with a run in the bottom half on Rocco’s leadoff double and two groundouts that advanced and then scored Rocco. With the score now 3-2, Feller had all the runs he would need.

In the bottom of the fifth Cleveland tacked on another run on a one-out double by Heath, a walk to Dutch Meyer, and a run-scoring single by Don Ross. Faced with runners on first and third and one out, Newhouser bore down, striking out Felix Mackiewicz and inducing Frankie Hayes to pop up to catcher Richards.

After his shaky third, Feller changed from a heavy, sweat-soaked shirt under his jersey to a lighter one.15 Whether that had any effect is hard to say, but afterward Feller hit his stride and fairly mowed down the Tigers. He pitched hitless ball for the last 6⅔ innings, as the Tigers never again threatened.16 During that stretch he allowed only five scattered baserunners, four on walks and another on an infield error as the Cleveland faithful “went completely and joyfully nuts.”17 Feller ended the game as he had begun it, striking out Jimmy Outlaw for the final out.18 Newhouser had settled down to retire the last 11 Indians in order, but no one noticed.

With his dozen strikeouts, Rapid Robert quickly reclaimed his position as a preeminent strikeout pitcher. He fanned at least one batter in every inning, every Tiger in the lineup except Richards, and Detroit’s two sluggers, Greenberg and York, twice apiece.19 All along, Feller made liberal use of a slider that he had honed during his time at the Great Lakes Naval Training Station.20

Afterward, manager Boudreau said, “Bob has a terrific slider now. He had one in 1941, but he didn’t use it as a standard part of his delivery. That slider not only is a great pitch in itself. It makes the fastball when Bob throws it, look twice as rapid.”21

For his part, Feller said, “I felt as strong at the end of the game as I did at the start and my arm felt all right. Of course, I was a little wild in spots, but I was able to reach a keener edge as I went along.”22

All in all, it was a glorious day for Cleveland baseball, whose fans exhibited “the greatest spree of enthusiasm since the pennant-hoping days of 1940.”23

Feller made eight more starts for the Indians in 1945 and finished his truncated year with a 5-3 record and a 2.50 earned-run average as the Tribe stayed in fifth place. He threw seven complete games, including a one-hit shutout of Detroit on September 19, and allowed only 50 hits in 72 innings pitched.24 The best was yet to come, however. In 1946 Feller had his career year with 26 wins among 36 complete games and 371 innings pitched. He struck out 348 batters to set what was thought to be the all-time major-league record.25

But on his return to baseball in 1945 after almost four years in the service of his country, Feller remarked, “I wouldn’t take $10 million to have missed that trip, but I wouldn’t take another for $10 million.”26

10 They were player-manager Lou Boudreau, Jeff Heath, Jim Bagby, Mel Harder, Gene Desautels, and Al Smith. In 1941 Les Fleming played two games and Steve Gromek played nine games with the 1941 Indians. They were also on the Indians in August of 1945

24 The one-hitter against Detroit was the sixth of Feller’s 13 one-hitters. A bloop third-inning single by Jimmy Outlaw was the only safety. Sickels, 134.

25 At the time it was thought that Rube Waddell held the all-time season strikeout record with 343 in 1904. Subsequent research, however, revealed that Waddell had actually struck out 349 in 1904, leaving Feller one strikeout short of tying the record. Sickels, 146; Feller with Gilbert, 134. Sandy Koufax and Nolan Ryan later surpassed both marks.