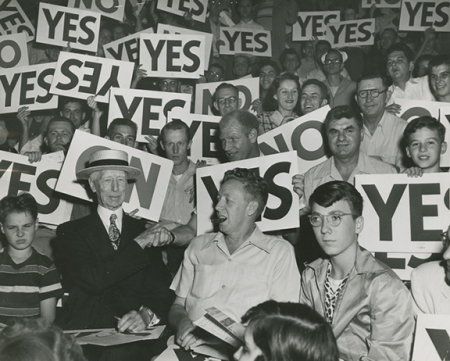 It was a “Veeck” of a ballgame for the St. Louis Browns and their 1,115 managers in the stands at Sportsman’s Park on August 24, 1951, in yet another amazing stunt pulled by the Browns’ legendary owner Bill Veeck Jr.

Since winning the American League pennant in 1944 and finishing third in 1945, the only two things the Browns could guarantee were lousy baseball and terrible attendance. From 1946 to 1950 the Browns averaged 59 wins and 95 losses, and were last in league attendance each season.1 Despite the team’s abysmal record and popularity, Veeck decided to buy the Browns in 1951 after being out of baseball since he sold the Cleveland Indians in 1949. He took over ownership in July 1951, intending to make the Browns the dominant team in the St. Louis market over the National League Cardinals.

That was a tall order, as the Cardinals had a history of World Series success and drew over a million fans each season from 1946 to 1950, while the Browns drew 1,700,540 for the entire five-year period. The Cardinals almost equaled that total in 1949 alone, when they attracted 1,430,676 people to Sportsman’s Park (which, incidentally, Veeck owned).

Veeck knew these were desperate times, and we all know what kinds of measures are needed in these instances. He decided to go for the outrageous, starting on August 19, when, in the second game of a doubleheader he brought in 3-foot-7 Eddie Gaedel to pinch-hit for Frank Saucier in the bottom of the first inning. Gaedel walked on four pitches, then sauntered down to first base and into baseball lore.

“The austere American League, celebrating its fiftieth anniversary this year, will reach the ripe old age of 100 before anyone other than Phineas T. Veeck, the Barnum of baseball, tops the colorful substitute for winning ball the sport-shirted showman offered yesterday at Sportsman’s Park,” wrote Bob Broeg.2

What Broeg didn’t know was that ol’ “Phineas T.” would top that stunt five nights later, when the lucky fans (including Veeck, his wife, and A’s owner Connie Mack) sitting in a special section behind the Browns’ dugout got to play Manager for a Day and guided the Browns to a 5-3 win over the Philadelphia A’s.

The groundwork for the stunt started even before the Gaedel game, when the St. Louis Globe-Democrat printed the following notice on August 15:

How to Become the Manager

If you would like to be a Grandstand Manager of the Browns on the night of Aug. 24 in their game against the Athletics, fill in your name, address, zone number and city or town below … If you would like to be one of the coaches, append a brief letter, stating your reasons. The shorter the better. Your membership card, entitling you to admission to park upon payment of tax, will be mailed to you.3

Veeck received 4,000 letters from across America, even as far away as Anchorage, Alaska. He chose two gentlemen, Clark Mitze and Charles E. Hughes, to be the coaches, although they weren’t allowed onto the field because the American League office did not receive their contracts by game time. Mitze, it seemed, was qualified because, according to his letter, he went to a batting cage, missed the first nine pitches, and then fouled off the 10th, bopping himself in the nose.

This idea of having the fans manage wasn’t surprising coming from Veeck, as he usually watched games from the bleacher seats. “I have discovered in 20 years of moving around a ballpark that the knowledge of the game is usually in inverse proportion to the price of the seats,” Veeck said.4

Here’s how the stunt worked: Each fan in the section received a placard with “yes” printed on one side and “no” printed on the other. When either Mitze or Hughes determined that a decision was in order, they contacted Veeck’s right-hand man, Bob Fishel, via walkie-talkie; Fishel then would raise a sign asking the fans a question, such as whether a runner should steal, if the infield should move back for a batter, even “Shall we jerk the bum,” and the fans would display their placards according to what they thought the team should do. A circuit judge, one James E. McLaughlin, estimated the votes to ensure fairness, and relayed the results to player-coach John Berardino.

The ballots from the notice had also asked the fans to select the starting eight for that night’s game, although Veeck did stop short of having 1,000-plus people bring the lineup card to home plate — probably because he didn’t think of it. Six of the starting eight from the Browns’ previous game — a 9-3 loss to the Red Sox — started for St. Louis. Sherm Lollar replaced Matt Batts at catcher and Hank Arft resumed playing first base after missing three games. Ned Garver, who got the mound assignment, had lost his previous start in the first game of the doubleheader at which Gaedel made his appearance. Nonetheless he had a fine 14-8 record with a 3.89 ERA, and would go onto win 20 games for a team that won only 52 the entire season. (He ended up second in American League MVP voting behind the Yankees’ Yogi Berra.) Journeyman Alex Kellner started for Philadelphia. Kellner had lost his last four decisions and was 7-12 with a 5.19 ERA at game time.

The game was almost a disaster for the Browns from the get-go, as Garver gave up three runs in the first inning. With one out, Ferris Fain and Elmer Valo both singled and Gus Zernial, who smacked 12 of the 33 home runs he hit that season off Browns pitching, belted a three-run shot to put the A’s ahead. Hank Majeski then reached on an error and Dave Philley singled Majeski to third.

At this point the “managers” were called upon to make their first decision, whether to move the infield in to cut the run off at the plate or move back for a possible double play. They voted, McLaughlin tabulated, and the decision was to move the infield back. That proved to be the right call, as Pete Suder grounded into an inning-ending double play.

Fans didn’t high-five each other in those days, or else there would have been 1,115 sore palms just from getting the first decision right. Besides, they had to contend with a three-run deficit. The Browns tied it in the bottom of the first. With one out, Jim Delsing doubled to center. Lollar showed his appreciation for the fans choosing him by hitting a single to drive Delsing home with the first St. Louis run. With the count 3-and-2 on Cliff Mapes, the fans were polled as to whether Lollar should be off with the pitch. They voted no, which proved smart as Mapes struck out. Ken Wood then hit the first of his two doubles in the game, sending Lollar to third. The fans looked like out-and-out geniuses when Arft singled to drive home two runs and tie the score, 3-3.

Ah, but then the realities of life at the helm hit home. The fans were asked if Arft should steal second, which, when you think about it, was the equivalent of having the PA announcer tell the other team that Arft was on his way. The fans voted for the theft, but Arft was out by two feet.

Lollar proved to be the hero of the evening. He hit a solo shot in the third to give St. Louis a 4-3 lead, and then scored the insurance run in the eighth when Mapes singled him home after he hit a two-out double. The final score was 5-3, with Garver going all the way for the win.

Zack Taylor, the Browns’ regular manager, spent the game sitting in a rocking chair wearing civilian clothes. He took over the team again the next night, but he must have longed for the rocker as St. Louis lost, 9-1. Veeck fired him after the season. Taylor piloted the Browns for four years (plus a 30-game stint in 1946) and never managed in the majors again.

The game was also memorable for Mitze, as Veeck gave him a trophy after the game inscribed: “One of the Best Coaches Ever Banned from the Coaching Lines.” He also didn’t have to jerk any bums.

In addition to the sources listed in the Notes, the author also used Baseballhall.org, Baseballhotcorner.com, and the New York Times.

1 The numbers exceed 154 — the number of games in a season in those years — due to rounding.