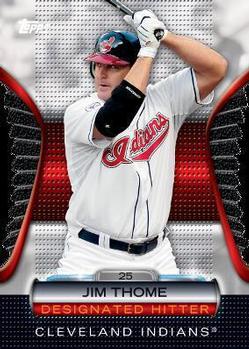 Facing a rash of injuries and fading playoff hopes, the Cleveland Indians’ front office needed to make some adjustments before the final month of the 2011 season.

And while bringing back the greatest power hitter in franchise history didn’t make a big enough difference by season’s end, the prodigal return of Jim Thome was – if only for a day – a much-needed boost for a rebuilding franchise that was playing beyond its years.

When the Minnesota Twins placed Thome on waivers in late August, the Indians claimed him, intending to fill the void left when designated hitter Travis Hafner went onto the disabled list with a foot injury on August 22. With an opportunity to return to his first major-league team, Thome waived his no-trade clause and an agreement between the clubs was struck on August 25.

“This is a special moment for our franchise. We’ve added a guy who is a future Hall of Famer to our clubhouse,” Acta said of the newly minted member of the 600-home-run club.1 “And you know he’s going to contribute. He can’t play every day anymore, but if we manage his time, he can be very productive.”2

At one day shy of 41 years old, Thome was far from the fearsome first baseman who smacked a team record 334 home runs from 1991 to 2002. But his presence alone bolstered the team’s morale and the revenue at the ticket window.

A sizable contingent was already expected for the Friday evening Dollar Dog Night and fireworks show, but 8,532 same-day tickets were sold to boost the attendance to a sellout crowd of 41,337.3 The fans, who waved “Welcome Thome” signs throughout the night, were treated as the Indians pulled their socks up high to honor Thome and grinded out a 2-1 victory to snap a two-game losing skid.

“I envisioned it,” Thome said of someday returning to the Indians, whom he spurned nearly a decade earlier by signing a six-year, $85 millon contract with the Philadelphia Phillies. “But you just don’t know. Baseball is a weird thing. … There were times I’d come back with another team and look around and think about the good times I had here in the ’90s. But I have no regrets (about leaving) because I was treated great everywhere I went.”4

In his return, Thome went 0-for-4 with two strikeouts as the designated hitter, but recently acquired starter Ubaldo Jimenez delivered his finest performance in an Indians uniform and the offense took advantage of some wild pitching from the Royals to escape with the win.

Jimenez had come to Cleveland in a trade with the Colorado Rockies on July 30.5 After the Indians found themselves a half-game out of first place with a surprising 47-42 record at the All-Star break, the front office looked to make a move that would bolster the rotation in a season when few expected the Indians to even finish above .500.

Initially, that plan backfired. In his first four starts with the Indians, Jimenez left much to be desired – he was 1-1 with a 7.29 ERA after surrendering 17 earned runs on 30 hits and eight walks.

But against the Royals he showcased his All-Star form, striking out a season-high 10 over seven innings. He scattered seven hits and allowed at least one baserunner in each of the first five innings, but the only damage came when the Royals’ Eric Hosmer hit a leadoff home run in the top of the fourth.

“This takes a lot of pressure off,” said Jimenez, who retired 11 of the final 12 batters he faced while improving to 8-10. “I came to a new team that was fighting to get into the playoffs. If I don’t do good, I feel bad.”6

Despite his efforts, it still appeared for most of the game that Jimenez might be in line for another loss.

Kansas City counterpart Felipe Paulino – who also started the 2011 season with the Rockies7 – was better than Jimenez through six innings, thanks in part to some superb defense behind him.

The Indians grounded into a double play in each of the first two innings, and in the fifth couldn’t produce a run despite three straight two-out singles. After Thome and Carlos Santana struck out, Kosuke Fukudome and Shelley Duncan singled to put runners at first and second, but when Jack Hannahan followed with a single to left, Fukudome was gunned down at the plate.

On the assist from left field was Alex Gordon. It was Gordon’s major-league-leading 20th of the season, which extended his new franchise record.8

But Paulino wasn’t bailed out in the seventh.

Santana drew a one-out walk and moved to second on a single by Fukudome. Duncan struck out, but Hannahan lined a single into center to knot the score at 1-1. Lou Marson drew a walk to load the bases, which prompted Royals manager Ned Yost to bring in Tim Collins from the bullpen to set up a left-on-left matchup against leadoff hitter Ezequiel Carrera.

“The matchup was perfect, but I knew I was gambling by bringing him in,” Yost said. “He’s got good stuff. That’s the gamble; that his stuff is good enough that he can get away with not throwing strikes in crucial situations.”9

The gamble did not pay off.

Carrera walked on seven pitches to bring home the deciding run, sending Paulino to his 10th loss of the season on a night when he pitched like a winner. He struck out six in 6⅔ innings, but needed 120 pitches to get there. Paulino scattered six hits and walked four as the Royals fell to 54-78.10

“It’s really frustrating,” Collins said. “That’s a game Paulie should have won. My job was to go in there and throw strikes, and I didn’t do that. That’s kind of been the story all year.”11

Carrera was the 42nd batter of the season to draw a walk off Collins, who had pitched only 56⅔ innings. Even if Collins had thrown strikes, Paulino wouldn’t have been in line for the victory after Indians relievers Vinnie Pestano (18th hold) and Chris Perez (28th save) slammed the door on the Royals over the final two innings. Cleveland improved to 64-64 with the win.

Beyond Hafner’s injury, the Indians were also missing center fielder Grady Sizemore (knee; out since July 18), promising rookie second baseman Jason Kipnis (hamstring; out since August 13), and left fielder Michael Brantley (wrist; out since August 22). Those absences didn’t help in the week leading up to Thome’s arrival either, which saw the Indians drop six of seven games and lose 4½ games in the American League Central Division standings. Right fielder Shin-Soo Choo (oblique) was added to the list two days later.

“They’ve done a great job all year long in getting to this point. I want to come in and be a piece. That’s my focus,” Thome said. “… It’s about trying to do what’s right right now, stay healthy, and hopefully we can have some fun here the next month.”12

In 22 games, Thome hit .296 and added three home runs to his franchise record. His impact wasn’t enough to keep Cleveland over .500, with the Indians finishing at 80-82 and 15 games out of first place.13

Despite Thome’s departure a day earlier, the first 10,000 fans into Target Field in Minneapolis on August 26 received a Jim Thome windup walking toy for a previously scheduled promotion – along with hopes that maybe he’d return in 2012.14

“I talked to him about it; he’d go play somewhere else, and talk to us again in the winter,” said Twins manager Ron Gardenhire. “Jim wants to get in the World Series, and I told him, we plan on having a really good baseball team next year.”15

As a child, I met Jim Thome in the early 1990s when the budding Hall of Famer purchased a vehicle at the dealership where my father was employed. I was unable to attend the game when Thome returned to the Indians because I was living in Illinois at the time.

1 Thome became the eighth member of the 600-home-run club after hitting two home runs against the Chicago White Sox on August 15. He missed a chance to reach the accomplishment as a visitor in Cleveland on August 12 and 13.

3 This was Cleveland’s fourth sellout of the season.

5 The Indians sent top prospect Alex White, Matt McBride, Joe Gardner, and a player to be named later (Drew Pomeranz) to the Colorado Rockies for Jimenez, who won 19 games and was an All-Star in 2010.

7 Paulino was traded to the Royals on May 26 for cash considerations.

8 Four of those 20 assists had come against the Indians.

10 Kansas City closed the season at 71-91 to finish fourth in the AL Central Division.

13 The finish was still a fantastic improvement for the Indians, who finished 2010 in fourth place at 69-93. Cleveland followed up with a disappointing 68-94 record and a fourth-place division finish in 2012. The Detroit Tigers won the AL Central in 2011 with a 95-67 record.