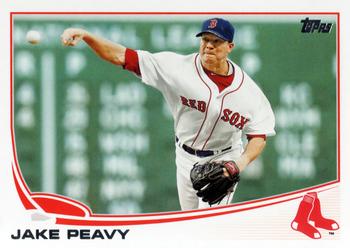 As the Boston Red Sox began their stretch run into September 2013, they were riding the crest of an unanticipated wave. Defying the preseason analysis that offered little hope of anything better than the previous season’s last-place finish, the Red Sox found themselves in the unexpected position of leading the American League East. Having made clear that their effort reflected the strength and resilience of the city they represented — one that was determined to show that while it had been rocked, it had not been beaten by the tragic Boston Marathon bombings of April 15 — the Red Sox were poised to bury the memories of their 2012 cellar-dwelling campaign as well as the infamous 2011 “chicken and beer” collapse.

Indeed, as the team headed into September they were on a mission, having increased their lead over the second-place Tampa Bay Rays from a single game when August began to a five-game cushion, while the Yankees languished in third place, eight games off the pace.

Former Cy Young Award winner Jake Peavy had joined the Red Sox in a July 30 trade from the Chicago White Sox. He faced his former team in Boston’s August finale. His previous outing, his fifth start with the Red Sox, was his best since the trade: a complete-game win over the Angels on August 25 that improved his overall record to 10-5.

After Peavy retired Chicago in order in the top of the first, the Red Sox staked him to an early lead, cobbling together a single run in their half of the inning. Jacoby Ellsbury led off with a single off White Sox starter John Danks, who then retired Shane Victorino and Dustin Pedroia. But David Ortiz reached base on an error by first baseman Paul Konerko and Mike Napoli hit a single to shallow left that brought Ellsbury around to score. The inning ended when Danks got Jonny Gomes to pop out to short.

Peavy had another three up, three down inning in the top of the second. The Red Sox put two on with one out in the bottom of the inning on a double by David Ross and a walk to Xander Bogaerts, but Ellsbury’s groundout and Victorino’s strikeout stranded the runners.

The White Sox touched Peavy for a run in the top of the third. After a pair of singles by Conor Gillaspie and Josh Phegley, Alejandro de Aza hit into a fielder’s choice to score Gillaspie.

The stalemate did not last long as the Red Sox countered in their half of the inning, taking a 2-1 lead when Napoli and Gomes hit back-to-back doubles with two outs. But that lead was also short-lived: The White Sox tied the game in the fourth on a single and a stolen base by Alexei Ramirez and a two-out single by Avisail Garcia.

There things stood as the Red Sox came to bat in the bottom of the fourth. Ross started the inning with a bunt single. Bogaerts’ single moved Ross to second, and Ellsbury’s ground-rule double brought Ross around with the tiebreaking run.

The Red Sox looked for more, with runners on second and third with none out. After the runners held on Victorino’s groundball to third, Bogaerts crossed the plate on Pedroia’s groundout. Ortiz’s single scored Ellsbury with the third run of the inning, giving the Red Sox a 5-2 lead.

That proved to be all Peavy needed. He retired the White Sox in order in the fifth and sixth innings and allowed only a single to Jordan Danks in the seventh. Peavy completed his seven-inning stint having given up only the two runs on five hits, all singles.

By the time Craig Breslow replaced Peavy in the top of the eighth, Boston had tacked on single runs in the fifth and sixth innings for a 7-2 advantage. Breslow breezed through the final two innings, allowing only a walk to Adam Dunn leading off the ninth, to seal the win.

Overall, it was a win very reflective of the well-rounded team the Red Sox had become. They collected 15 hits; Ellsbury, Victorino, Ortiz, Napoli, Gomes, Ross, and Bogaerts all had at least two. Bogaerts, who would not turn 21 years old until October 1, became the youngest Red Sox player to reach base three times in a game, score at least one run, and drive in one since Tony Conigliaro and Tony Horton in 1965. The future had arrived for the Red Sox.

For Peavy, now 11-5 after notching his third win with the Red Sox, it was just the latest success in a season that had taken a decided turn for the better after he came to Boston in July. Peavy had been thrilled with the opportunity to go to the contending Red Sox. He finished the regular season with a 4-1 mark with the Red Sox and a 12-5 record for the season. He started three games in the postseason, including Game Three in St. Louis in the Red Sox’ World Series win over the Cardinals. Indeed, so excited was the right-hander at winning the championship that after the team won the World Series, an event celebrated in Boston by the traditional duck boat parade through the streets of the city, the veteran right-hander bought one of the boats as a memento of the championship season.1

While the boat represented the achievement of a lifetime goal, Peavy’s stay in Boston proved short-lived. After struggling through the early part of 2014, compiling a 1-9 record in 20 starts, he was traded at the end of July to the San Francisco Giants. As he had the previous year, he provided valuable pitching depth, compiling a 6-4 record down the stretch as the Giants ultimately won the World Series over the Kansas City Royals, with Peavy starting, but losing, two games in the fall classic.

With their seventh win in their last nine contests, the Red Sox finished the month of August with a 16-12 record. They did even better in September, winning 16 of 25 games and avoiding any challenges to their division lead. They finished six games ahead of second-place Tampa Bay and 12 ahead of their longtime rivals, the Yankees, who were mired in third. In the postseason, they made clear that their American League-leading 97-65 record was no fluke, eliminating the wild-card entry Rays in the ALDS in four games before taking six games to dispatch the Central Division champion Detroit Tigers.

Matched up against the National League champion St. Louis Cardinals, the Red Sox fell behind by losing Games Two and Three before winning three in a row to close out the Series and win their third crown in 10 years. Under John Farrell’s steady leadership, the Red Sox became only the second team to win the World Series the year after finishing in the cellar. The 1991 Minnesota Twins were the only other team to accomplish that feat. It was an effort emblematic of the resilience and spirit that had characterized the team and the city throughout 2013. Boston strong they were!