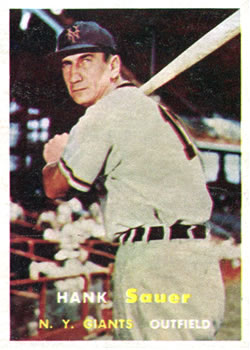 As the New York Giants made the trek across the Hudson River to play the Brooklyn Dodgers in Jersey City, there was considerable speculation as to the future of the two franchises. On May 28, 1957, the National League owners gave unanimous approval for both the Giants and Dodgers to move to the West Coast with the stipulation that they must both make the move.1 Supposedly the other owners, with travel costs in mind, did not want their teams to have to travel to either San Francisco or Los Angeles for just a single series. While nothing was certain, it was becoming apparent that the Giants would end up in San Francisco and Los Angeles would be successful in its pursuit of the Dodgers.

One of the reasons why the Dodgers were playing in Jersey City was to put pressure on New York City to provide the Dodgers and their principal owner, Walter O’Malley, land to build a new ballpark in Brooklyn. O’Malley felt Ebbets Field had outlived its viability as the home field for the Dodgers. As this game between the Dodgers and the Giants on August 7, 1957, was about to begin, no real progress had been made in O’Malley’s quest for land in Brooklyn.

After winning the National League pennant in 1955 and 1956 and the World Series in 1955, the Dodgers now found themselves trailing both the Milwaukee Braves and St. Louis Cardinals just three games out of first place. The Giants, having won the World Series in 1954, had seen their fortunes in decline since that year. They had a record of 47 wins and 61 losses and were 17½ games out of first place. The Dodgers still had the aging stars Gil Hodges and Roy Campanella in the starting lineup while Willie Mays led the Giants. Mays was having an excellent year with 18 home runs, 70 RBIs, and a .327 batting average going into the game. There was even talk of a Triple Crown for Willie.2

This game had the same starting pitchers, Don Newcombe for the Dodgers and Johnny Antonelli for the Giants, as the teams’ game the year before in Jersey City (August 15). That game saw Antonelli and the Giants outduel Newcombe and the Dodgers 1-0 in a superb pitching duel. The only run scored on a home run by Mays.3

The Dodgers started the scoring in the bottom of the first. Junior Gilliam led off with a single, moved to second on a wild pitch and scored on Campanella’s single.

The Giants broke through against Newcombe in the top of the third. Valmy Thomas, their catcher, led off with a single. Antonelli walked. The runners moved up on Danny O’Connell’s sacrifice bunt to first baseman Hodges. Don Mueller, Mandrake the Magician, singled to center, scoring Thomas and Antonelli. Mays then singled to center field with Mueller going to third and Mays to second on Gino Cimoli’s throw. Ray Jablonski’s sacrifice fly to Cimoli scored Mueller. The Giants were now in the lead 3-1.

The Dodgers came right back in the bottom of the third, tying the score. Antonelli got the first two batters but Carl Furillo singled with two outs and Hodges walked. Campanella singled Furillo home and Charlie Neal scored Hodges with a single.

The game stayed tied until the bottom of the fifth. Once again Antonelli retired the first two batters. Hodges then tripled and Campanella smacked a line-drive single to left, giving him three hits and three RBIs in the first five innings. Charlie Neal then hit a long drive to right-center field, scoring Campanella, but was thrown out at the plate trying for an inside-the-park home run. The Dodgers now led 5-3.

Newcombe retired the Giants in the sixth and seventh innings without any scoring. Dusty Rhodes had pinch-hit for pitcher Antonelli in the seventh so Marv Grissom replaced him in the bottom of the seventh. Grissom retired Cimoli, Furillo, and Hodges in order. The Giants threatened against Newcombe in the top of the eighth as Don Mueller led off with a single to center field. Mays popped out but Jablonski singled to left-center. Newcombe then got Bobby Thomson to ground to shortstop Neal, who started a double play.

Campanella singled to lead off the bottom of the eighth after Grissom came close to hitting him with a pitch. The single gave Campanella four hits in the game. Grissom retired the next three hitters, stranding Campanella.

Newcombe was unlucky at the beginning of the ninth: He made good pitches to both Daryl Spencer and Eddie Bressoud but they got infield hits, putting runners at first and second. Hank Sauer was called upon to pinch-hit for Valmy Thomas. During his at-bat, Sauer broke his bat when he fouled off a pitch, and borrowed a Willie Mays bat, a few ounces heavier.4 Sauer later commented that “Newk was as fast as I’ve ever seen him.”5

Unfortunately for Newcombe, his 3-and-2 pitch to Sauer was too good and Sauer hit a home run down the line over the left-field fence. Grissom then came to the plate and Newcombe greeted him with two pitches under his chin, retaliating for the close pitch at Campanella the previous inning. When the third pitch was also high, Walter Alston, the Dodgers manager, called in Clem Labine from the bullpen to replace Newcombe. As Newcombe strode to the Dodgers dugout, he kept his head down but just before he reached the dugout, he raised his head and apparently spit at the crowd.6

After Labine threw a strike, Grissom walked. O’Connell sacrificed Grissom to second. Mueller reached first on a fielder’s choice. Mays then hit a groundball to Randy Jackson at third base and Jackson misplayed it, loading the bases. It appeared that Jackson hurt his leg on the play and he was replaced by Pee Wee Reese. Jablonski then singled in both Grissom and Mueller. Labine struck out Bobby Thomson and Mays was caught stealing home, ending a bad ninth inning for the Dodgers. The Giants had erupted for five runs and led 8-5.

Grissom retired the Dodgers in order in the ninth, preserving the 8-5 Giants victory before 25,913 fans at Jersey City’s Roosevelt Stadium. Hank Sauer was the Giants hero with his pinch-hit three-run home run. Marv Grissom kept the Dodgers scoreless in the final three innings and was the winning pitcher. Campanella was the hitting star for the Dodgers with four hits and three RBIs. Newcombe was the hard-luck losing pitcher.

The postgame conversation was all about Newcombe. The headline concerning the game in Jersey City’s Jersey Journal was “Newk as Unpopular in JC as He Is Everywhere Else” followed by “Don Fumes, Spits After Being Booed.”7 Another headline on the page stated, “Newk May Have Blown Pennant.”8 The Dodgers lost their first three games in Jersey City, and Newcombe was the losing pitcher in all three. To be fair to Newcombe, he pitched well in both Giants games, as well as in many of the big games he failed to win in his eight years with the Dodgers.9

The fears of both the Giants and Dodgers fans were realized. On August 18 the Giants board of directors authorized the move to San Francisco. Interestingly, Warren Giles, president of the National League, stated that such a move was not contingent on the Dodgers also moving to Los Angeles.10

With respect to the Dodgers, there was a last-ditch effort of New York politicians led by a future governor of New York, Nelson Rockefeller, but it collapsed. On October 6 the Los Angeles Board of Commissioners authorized the use of Chavez Ravine for a new Dodgers stadium.11 On October 7 Walter O’Malley announced the Dodgers’ move to Los Angeles.12 The Giants and Dodgers would no longer call New York City home and Jersey City would never host another major-league game.

In addition to the sources mentioned in the Notes, box scores and play-by-play accounts for this game can be found on baseball-reference.com and retrosheet.org.