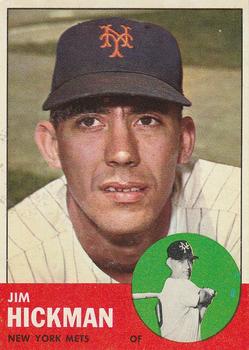 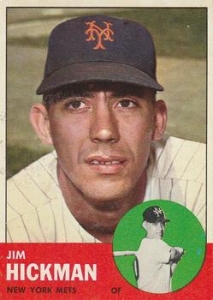 The New York Mets had an infamous inaugural year in 1962, setting a record for the most losses in a season during the modern era. Their sophomore season of 1963 was not much better. On August 6, 1963, the Mets owned a record of 34-77.1 After a 16-game road trip, in which they lost 14 games, the last-place New Yorkers returned home to the Polo Grounds. They were to play a three-game series against the St. Louis Cardinals, who were tied for second in the National League with the San Francisco Giants, both teams five games behind the Los Angeles Dodgers (New York was 33½ games back).

The Cardinals had won the first game of the series, 4-3, the day before. For the second game attendance on the warm and sunny Wednesday afternoon was estimated at 20,649 (9,977 paid).2 Casey Stengel’s “forces slugged their way to a 7-3 victory”3 over the Cards, led by Jim Hickman.

Tracy Stallard took to the mound for the home team. He had been with the Boston Red Sox for three seasons, spending all of 1961 with the team, giving up Roger Maris’s 61st home run on October 1, but most of 1960 and 1962 in the minors. At the end of the 1962 season, Stallard was traded by the Red Sox with Pumpsie Green and a player to be named later to the Mets for Felix Mantilla.4 Stallard began the season in the bullpen, but by the beginning of June became a regular in the Mets rotation. Making his 14th start, the 6-foot-5 right-hander brought a 4-10 record with him. He had dropped six of his last seven decisions.

Ernie Broglio started for St. Louis. In his second big-league season in 1960, the fellow righty won 21 games and finished third in the Cy Young Award voting. After two mediocre seasons, he seemed to have rebounded in 1963, and he entered this game in search of his 13th win of the season. Each of his first two starts against the New Yorkers had resulted in a two-hit shutout, and he had three complete game wins over the Mets coming into this contest.5

Stallard retired the Cardinals in the top of the first. Leading off for the home team was Hickman, playing in just his second season in the majors. A “one-time Cardinal farm hand,”6 Hickman came into the contest batting .223. He started the bottom of the first with a single and advanced to second on Duke Snider’s single, but both runners were stranded. The Mets, however, rallied in the second. Joe Hicks, leading off, was hit by a pitch. Choo-Choo Coleman singled to center, and Hicks raced to third base. St. Louis center fielder Curt Flood bobbled the ball and Coleman took second on the error. Al Moran and Stallard then had productive groundouts to short, driving in a run with each. With the bases now empty, Hickman doubled and Duke Carmel drew a walk, but New York again left two runners on base.

Stallard was in control, holding the Cardinals scoreless until the fourth inning, when Dick Groat, who was batting .418 against the Mets, launched a home run on Stallard’s first pitch. Yet that was all the damage done in the inning.

Broglio had retired two New York batters in the fourth frame when “the game blew up in his face.”7 With Stallard on first, Hickman entered the batter’s box. Suddenly, “there was a loud crack and there was the ball, moving like a rocket out toward the Cardinal bullpen, where it finally landed.”8 Stallard scored easily and Hickman pulled into third base with a triple. This must have rattled the Cardinals hurler, for Broglio then walked both Carmel and Ron Hunt to load the bases. Snider singled to left, driving in Hickman and Carmel. That spelled the end for Broglio. St. Louis skipper Johnny Keane motioned to the bullpen and veteran Lew Burdette came on in relief. Burdette had been recently acquired by the Cardinals from Milwaukee and, normally a starter, he was making only his fourth relief appearance of the season.9 Frank Thomas greeted the new hurler with an RBI single, giving the Mets a 6-1 lead.

St. Louis loaded the bases on a single and two walks in the fifth. Bill White’s two-out single plated Dal Maxvill and Flood, but that was all the Cardinals could muster. Barney Schultz took over the mound duties for St. Louis in the bottom of the sixth.

An inning later, in his fourth at-bat, Hickman homered “over the left field roof on a knuckleball”10 off Schultz, increasing New York’s lead over St. Louis to 7-3. That was his fourth hit of the day, and the game was only in the sixth inning. The fans gave him “one of the biggest ovations a Met has ever received.”11 New York coach Solly Hemus, who was a former Cardinals manager (1959-1961), told reporters, “The ball Hickman hit to left-center would have been a home run in St. Louis. He would hit eight or nine more home runs a year if he played his home games in St. Louis.”12 It was Hickman’s 10th round-tripper of the season.

According to the New York Times, Stallard “finished stronger than he started.”13 The Cardinals threatened in the seventh, loading the bases with none out. Stallard retired White on a popout to short right field, and then Boyer hit into an inning-ending double play. St. Louis had a runner in each of the final two innings but did not mount a threat. In the eighth the New York fans were treated to a pinch-hit at-bat by Stan Musial, in his final season in the majors. The future Hall of Famer grounded out to first unassisted. In picking up his fifth win, Stallard recorded his fourth complete game of the season; Broglio took the loss. The Mets went on to win four of their next six games. Stallard earned the victory in one of those contests (against the Chicago Cubs on August 11).

Hickman became the first Met to hit for the cycle, and he “accomplished the feat in direct order of his first four times up – single, double, triple and homer.”14 He batted just .229 for the 111-loss New York Mets in 1963. The probability was not in his favor, especially for hitting a natural cycle. According to Jim McCulley of New York’s Daily News, “Needless to say, this was Jim’s most memorable day in the majors.”15

5 Broglio finished the 1963 campaign with a record of 3-1 against the Mets, posting a 2.21 earned-run average. He won 18 games for the Cards, averaging just under three earned runs per game (2.99).

9 Burdette had appeared in 15 games for the Braves (13 starts), and this was his 11th appearance for the Cardinals (9 starts).