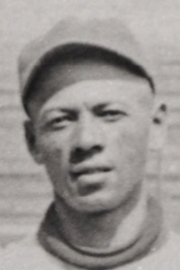 Fresh off a one-hit shutout of the Kansas City Monarchs, Chicago American Giants right-hander Tom Williams faced the St. Louis Giants, who rivaled Chicago among the hottest teams in the Negro National League in July 1921. Williams outdueled St. Louis’s Bill Drake, limiting the Giants’ powerful lineup to three hits and stranding the bases loaded in the ninth inning, in the American Giants’ 2-0 win in the opener of a doubleheader at Schorling Park on July 10.

Williams was just 20 years old when he joined Rube Foster’s American Giants in 1917. A South Carolina native and Morris Brown College product, Williams earned a reputation as an intelligent competitor.1 He ran second behind Dick “Cannonball” Redding on the powerhouse 1917 American Giants’ staff, then returned to Foster’s fold in 1920 to serve as a cornerstone of the Negro National League’s inaugural champions. Slowed by illness over the winter of 1920-21, Williams regained his form as 1921 progressed,2 including his one-hitter against Kansas City on July 5.3

The American Giants had racked up a series of hard-fought wins before their six-game series with St. Louis. A five-game sweep over the Indianapolis ABCs in June included three straight final-at-bat wins, and two narrow victories over their cross-city rival Chicago Giants followed. During the first week of July, Foster’s team, highlighted by Williams’s gem, beat Kansas City four times in six games to maintain a slim lead over the Monarchs for second place.4

St. Louis, fourth in the Negro National League, also claimed impressive recent triumphs. The Giants had outscored the Columbus Buckeyes 29-1 in a two-game series, with Oscar Charleston driving in five runs in a 20-run thrashing on June 29. They moved on to Detroit and beat the first-place Detroit Stars four times in five games.5 St. Louis’s “Pill Smashers” had racked up 43 runs while winning three of five games when the American Giants visited in May.6 “The St. Louisans gave Foster an awful spanking [in May] and come here to satisfy the Chicago fans that the performance was no scratch,” the Chicago Whip noted.7

Foster’s team opened the July skirmish with a 16-4 win on July 9 in Gary, Indiana, behind a homer by Cristóbal Torriente.8 The action shifted to Chicago for a Sunday doubleheader. Twelve thousand fans showed up on a sunny afternoon to see the American Giants and Giants.9

Williams hit Joe Hewitt with a pitch with one out in the top of the first, bringing up Charleston, author of a spectacular season with the American Giants in 1919.10 The crowd gave him “a warm reception,” the Chicago Defender reported;11 Bobby Williams turned his grounder to short into a force. Charleston stole second, but Charlie Blackwell’s groundout stranded him there.

Like Williams, Drake had spent several years with independent clubs. Known as “Plunk” for pitching inside, the 25-year-old right-hander had led the Giants in appearances, starts, and wins in 1920 and was headed for a repeat in 1921.12

Dave Malarcher led off the American Giants’ first with an infield hit, and the baserunning adventures began soon after Bingo DeMoss forced him at second. First, Drake’s pickoff caught DeMoss “napping” off first; Tullie McAdoo tagged him out.13

Jimmie Lyons walked, bringing up Torriente, who worked the count full as Lyons stole second, then third. On the payoff pitch, Lyons took off for home. Drake missed outside for ball four, but catcher Dan Kennard tagged out Lyons, ending the inning.

Lyons rebounded in the second with outstanding defense in left, running in to grab Kennard’s “Texas leaguer,” making what the Chicago Defender called a “great running catch” of McAdoo’s drive in left center, and going back for Sam Mongin’s fly ball.14 Drake found his stride in the bottom of the inning, the first of four straight hitless frames for the American Giants.

Williams likewise kept St. Louis off the scoreboard, but the journey was more eventful. Hewitt, the Negro National League’s leader in steals in 1921, led off the fourth with a single and swiped second. He tried to steal third, but Jim Brown gunned him down, with Malarcher “blocking the bag perfectly and laying the ball on the runner.”15 Charleston followed with a walk – but Brown threw him out attempting to steal second, and the Giants went scoreless.

Kennard started the fifth with a hard-hit ball to first, but Leroy Grant knocked it down and “recovered it in time to slide head first into the bag, getting the putout.”16 Williams was less fortunate with the next St. Louis batter, when Grant dropped Bobby Williams’s throw on McAdoo’s grounder for an error. But Williams retired the next two Giants to end the inning.

Williams pitched around his own error in the sixth, stranding Drake at third when Torriente caught Charleston’s long fly ball. In the bottom of the inning, DeMoss’s two-out single was Chicago’s first hit since the first inning, but Drake again held the American Giants scoreless.

Kennard’s leadoff walk was Williams’s sole blemish in the seventh, and the game moved to the American Giants’ half at a scoreless tie. Drake moved toward another clean inning by getting Torriente to foul to Kennard for the first out. The Chicago Defender reported that Drake appeared “master of the situation, pitching with confidence.”17

At this point, the crowd grew louder. “[T]he bleacherites started stamping, pulling for the tide to change,” according to the Chicago Defender.18 The cheering soon spread to the grandstand; before long, “the spirit followed to fans in both boxes and the field seats.”19

Brown drove Drake’s pitch to left. Doc Dudley made “a strenuous run,” but the ball grazed off the tip of his glove.20 Brown was in with a double.

Bobby Williams was next, with the “bleacherites pleading for a hit.”21 Foster ordered a bunt; Williams jabbed through the first pitch for a strike. Drake’s next two offerings missed the zone.

Williams attempted to bunt again, but the ball went foul. The Giants drew in their infield, expecting another bunt. But Foster signaled for Williams to hit away. Williams doubled to left, driving in Brown with the game’s first run. Grant followed with another double to left. Williams scored, and the American Giants led, 2-0.

Now with the lead, Tom Williams zipped through the eighth, inducing two groundouts and fanning Drake with a “drop” pitch.22 The American Giants’ advantage remained two runs heading to the ninth.

To that point, Hewitt’s fourth-inning single was St. Louis’s only hit, but the Giants shortstop opened the ninth with another single to center. The dangerous Charleston grounded to third; Malarcher threw to DeMoss for the force on Hewitt. Williams hit Blackwell with a pitch to put the tying run on base.

Kennard swung, and the ball dribbled off his bat, “resulting in a perfect bunt, to the surprise of all hands present, including Catcher Brown, whose tardiness resulted in another horse-shoe hit,” the Chicago Whip reported.23 The single loaded the bases. “St. Louis fans were yelling for a hit,” the Chicago Defender observed.24 “American Giants fans [were] standing up, hearts beat[ing] heavy, a single will tie the score.”25

Williams missed with two balls to McAdoo, then threw a fastball for a strike. Another ball ran the count to 3-and-1. McAdoo swung and missed at a second strike. He fouled off three straight full-count pitches. Next came a “slow drop”; McAdoo “miss[ed] it by a mile” for strike three.26

Down to the last out, St. Louis manager Dick Wallace sent up Sam Bennett, whose professional career dated to the 1907 San Antonio Black Bronchos, to bat for Mongin. Bennett pounded his bat on home plate and called out to Williams, “You’ve got to pitch to me.”27

The first pitch was a ball. Bennett swung at the second and missed. He grounded Williams’s next pitch to DeMoss, who made the throw to first. Williams and the American Giants had escaped with a 2-0 win.

“Like all the others, the alleged heavy smashing St. Louisans checked their war clubs at the gate when it was noised that Tom Williams was going to pitch,” the Chicago Whip crowed.28 It was “one of the best games ever played at this park,” the Chicago Defender asserted.29 The American Giants completed the sweep with a 6-3 win in the nightcap, in a game called in the seventh inning “so that both teams could eat, dress, and catch a rattler for St. Louis.”30

The series moved to St. Louis, and the Giants responded with three wins in three days.31 The St. Louis Argus showed its hometown pride. “St. Louis gave the Windy City players the most thorough beating they ever experienced and for the first time in the history of baseball, sent them away without a single victory to their credit,” it proclaimed.32 The American Giants and Giants had split their six-game encounter.

Chicago eventually overtook Detroit and captured its second Negro National League pennant in two seasons. Williams led the American Giants in games pitched; his 14 wins were second on the staff to Dave Brown.

In addition to the Sources cited in the Notes, the author consulted the Seamheads.com, Baseball-Reference.com, and Retrosheet.org websites for pertinent material; newspaper game coverage in the Chicago Defender and Chicago Whip; and SABR Baseball Biography Project biographies relevant to this game, especially Tim Odzer’s biography of Oscar Charleston.

Thanks to SABR members Chris Hicks and Thomas Thress for their research assistance with issues of the Chicago Defender and Kevin Johnson and Ken Carrano for their comments on an earlier version of this article.

1 “Ask any of the Negro league batters the half dozen toughest pitching propositions he faces in a season, and nine out of ten of them will include Williams’ name on the list,” the Chicago Whip asserted in 1921. “Not only is he rated a pitcher with great natural gifts in speed and control, but he is universally considered one of those wise players who uses his head.” “The Ace: Tom Williams,” Chicago Whip, January 8, 1921: 7.

2 A Chicago Whip article in May 1921 noted that Williams “has not fully recovered from his illness of the past winter and spring.” “Fosterites Outhit Motor Men and Win: Torriente Wields a Mighty Bludgeon, While Lyons Steal[s] Way into Heart of the Fans, as Locals Outslug the Foe for a[n] 8-5 Victory,” Chicago Whip, May 28, 1921: 7.

9 On the same afternoon at Comiskey Park, three blocks from Schorling Park on Chicago’s South Side, a crowd of 32,000 saw the Chicago White Sox beat the New York Yankees, 4-1. Babe Ruth was held homerless in that game; his season total remained 31.

10 Jeremy Beer, Oscar Charleston: The Life and Legend of Baseball’s Greatest Forgotten Player (Lincoln: University of Nebraska Press, 2019), 105-111. According to Seamheads.com, Charleston batted .409/.467/.617 in 41 games with the American Giants in 1919. Charleston’s on-base-plus-slugging (OPS) of 1.180 trailed only Pete Hill’s 1.380 among players with regular roles on Western Independent teams.

12 “I had a pretty bad habit of throwing at players,” Drake remembered in a 1971 interview. “Interview With Bill Drake,” Negro League Baseball Project, University of Missouri-St. Louis, available at http://thegloryofbaseball.blogspot.com/2005/09/interview-with-bill-drake.html (accessed June 25, 2021).

28 “Smashers Ill at Ease Against Fosterites.”