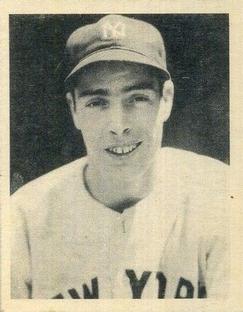 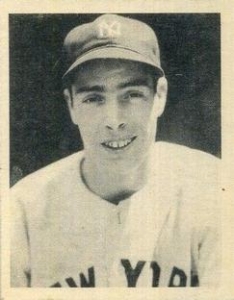 To paraphrase a newspaper account of the July 10, 1941, game between the New York Yankees and St. Louis Browns: It was Johnny Niggeling’s birthday, but Joe Gordon, Joe DiMaggio, and the Yankees got the gifts.1

Niggeling, the Browns’ knuckleballer, started against the Yankees on his 38th birthday and held them to three hits in five innings. Unfortunately for him, one of those hits – off the bat of Gordon – landed in the left-field seats at Sportsman’s Park to give the Yankees a 1-0 victory in the first game after the All-Star break.

DiMaggio, meanwhile, ran his record consecutive-game hitting streak to 49 by a narrow margin. His first-inning grounder took a hard bounce off the glove of Browns shortstop Alan Strange and rolled into left field. DiMaggio was credited with a single.2 In DiMaggio’s second at-bat, Niggeling retired him on a fly ball. A rainstorm washed out the game after five innings, costing the Yankee Clipper any chance to record a more solid hit.

Manager Joe McCarthy’s Yankees swaggered into the game on a hot streak, having won their previous nine games and 15 of their last 17. New York boasted a 48-26 record with two ties, which set them 3½ games ahead of the Cleveland Indians in the American League pennant race.

Luke Sewell’s Browns sat seventh in the AL with a 27-45 record, 20 games behind the Yankees and only 1½ games ahead of last-place Washington. This record didn’t entirely reflect the team’s recent performance, though. The team got off to a 15-29 start under Fred Haney, but improved after Sewell took the reins on June 5. From July 1 through the end of the season, the Browns played winning baseball, breaking the .500 mark at home in July and August.3 But while the Browns shook off some of their doldrums under Sewell, the Yankees gave them fits all season long. St. Louis went just 4-18 against the Yankees, including a 1-10 record at Sportsman’s Park.

The New York lineup was packed with future Hall of Famers as well as other stars who earned lasting Yankee renown. Lefty Gomez got the start on the mound, with a 6-3 record and a 4.23 ERA. He was 2-1 with two complete-game wins in four prior starts against the Browns. Others in the lineup included third baseman Red Rolfe, right fielder Tommy Henrich, left fielder Charlie Keller, catcher Bill Dickey, and shortstop Phil Rizzuto. DiMaggio received congratulations and best wishes before the game from George Sisler, the former Browns star whose 41-game hitting streak in 1922 stood as the AL record until DiMaggio came along.

The one Yankee starter who remains comparatively obscure – at least by the stellar standards of his teammates – was rookie first baseman Johnny Sturm, a St. Louis native who hit .239 in 124 games in his only major-league season. After the December 7, 1941, attack on Pearl Harbor, Sturm enlisted in the military, where he served until November 1945. Like other ballplayers of his generation, his commitment to his country cost him big-league service time. After the war, Sturm played and managed in the minor leagues, then scouted for several major-league teams.4 He was the only player in the Yankees lineup who did not make the Hall of Fame or have an All-Star appearance.

The Browns’ starting lineup featured a future Hall of Famer in catcher Rick Ferrell, as well as some punch from center fielder Wally Judnich, third in the league with 23 doubles; first baseman Roy Cullenbine, third in the league with a .367 average; and right fielder Chet Laabs, hitting .306. Shortstop Strange had played for the Browns and Senators in 1934-35, disappeared into the minor leagues for several seasons, then returned to the Browns from 1940 through 1942. He entered the game hitting .300 in limited duty.

And then there was Niggeling, an Iowan known for throwing a slow, fluttering side-arm knuckleball gripped with only his index finger and thumb.5 He didn’t reach the majors until well past his 34th birthday, in 1938, and didn’t firmly establish himself as a big leaguer until two seasons later. At his best, though, he was a more useful pitcher than this description makes him sound. Working against war-depleted talent in 1942, he went 15-11 with a 2.66 ERA for St. Louis.

Coming into the game, Niggeling had a 1-4 record and a 3.86 ERA, which he’d steadily whittled down from 6.20 since the end of May. Sportswriters suggested that Niggeling’s unusual deliveries could threaten DiMaggio’s hitting streak: “If Johnny has a good night – and he hasn’t had many this season – he’s liable to stop anybody, even DiMag. A good night means he has control of the pitch and can make it [flutter] just the way he wants to.”6

The game drew 12,682 fans to Sportsman’s Park, as the lure of DiMaggio’s streak outweighed the threat from clouds and rumbling thunder. By Browns standards, that was a packed house: According to Retrosheet, the team drew more than 10,000 fans at home on only four dates in 1941.7

St. Louis fans may have had another reason to stay home that night. The Browns’ first game following the All-Star break was also Dizzy Dean’s debut as a radio announcer.8 The folksy, beloved former Cardinals star called both Browns and Cardinals games on the radio that season. It was the beginning of a high-profile second career for Dean that continued until the late 1960s, later including the nationally televised Game of the Week on ABC and CBS.

The Yankees, like the rain, threatened immediately. With one out in the first, Rolfe walked and took second on a groundout. DiMaggio’s ground single put runners on the corners. The New York Daily News asserted that Strange would have had a tough time making a play on DiMaggio at first, even if he had fielded the ball.9 The New York Times described it as “a hard, bounding smash to deep short” that Strange touched but could not hold.10 It didn’t add up to runs, as Keller struck out to end the inning.

The Browns ran themselves out of a rally in the bottom half. Second baseman Don Heffner led off with a single and Laabs forced him at second. One out later, Cullenbine hit an infield single, but Laabs ran too far around second base and was caught out when Rizzuto threw to Gordon.11

With one away in the second, Gordon drove one of Niggeling’s flutterballs high and hard into the bleachers for his 13th home run of the season and a 1-0 Yankee lead. It was all the offense the Yankees needed, and almost all they would get. Only one additional Yankee reached base: Rizzuto singled in the fifth, then was thrown out trying to steal.12 The Browns committed one error in the fifth, when Cullenbine dropped a foul pop, but it did not lead to a baserunner.

St. Louis put two runners aboard in the second when left fielder Bobby Estalella singled and Strange walked, but Niggeling’s bouncer to the mound ended the rally.

The Browns squandered additional chances in the third. First, Rolfe let Heffner’s leadoff grounder roll down the third-base line, thinking it would go foul. The ball rolled some distance past the bag, and one game story suggested Heffner missed a chance to hustle to second instead of staying at first.13 One out later, Judnich laced a hit off the right-field wall, but the ball bounced off the screen so quickly that Judnich was held at first and Heffner at third.14 Gomez got Cullenbine to pop to third base for the second out. The next hitter, third baseman Harlond Clift, got a new lease on life when Keller dropped his foul fly ball for an error. Clift couldn’t deliver, though, as he skied a pop to Rizzuto to end the inning.15

That effectively ended the Browns’ challenges. Heffner gave the fans a last thrill in the fifth inning when he lashed a ball into the right-center-field gap. Henrich ran down the ball, caught it, and held on “despite a slide that carried him ten feet on his right ear.”16 Laabs then tapped to the mound for the third out. Niggeling retired the Yankees in order in the sixth,17 but that half-inning of action was washed away when the rain arrived, and the game went into the records as a five-inning affair.

Game stories noted Niggeling’s mastery of the Yankees, as compared to Gomez’s frequent struggles with the Browns. “It was a mighty swell exhibition by Niggeling. Not many hurlers stop the Yanks like that,” the New York Daily News wrote. “But the one pitch to Gordon beat him.”18

New York rolled to a 101-53 record with two ties, then beat the Brooklyn Dodgers in the World Series. DiMaggio stretched his hitting streak to 56 games and was named the AL’s Most Valuable Player by The Sporting News and the Baseball Writers’ Association of America. The Browns finished at 70-84 with three ties, 31 games out of first, tied for sixth place with the Senators.

1 “‘Flutter Ball’ Fails to Stop Joltin’ Joseph,” Brooklyn Eagle, July 11, 1941: 11. The Eagle’s jaunty account of the game closed with the line: “It was Niggeling’s 36th birthday but the Yankees stole the gift.” Actually, it was his 38th.

6 Smith. The story contains an apparent typo – “can make it uutter just the way he wants to.” The author assumes from context that “flutter” was the intended word. On August 3, 1941, DiMaggio went 0-for-4 against Niggeling, stopping his second hitting streak of the season at 16 games.

8 Drebinger, Haley, and “DiMaggio Hits in 49th in Row, Browns Lose” all mention Dean’s broadcasting debut. On September 28, 1947, Dean mounted a one-game comeback for the Browns after criticizing the team’s pitching staff over the air and claiming he could do better. He pitched four scoreless innings against the White Sox.

12 Niggeling’s first-inning walk to Rolfe was his only free pass of the night.

14 Drebinger. Smith, in the New York Daily News, described Judnich’s hit as “a near homer.”

15 Retrosheet lists Clift as “making an out to shortstop” but Haley and Smith described it as a popup.

17 According to multiple sources, including Drebinger and Haley.