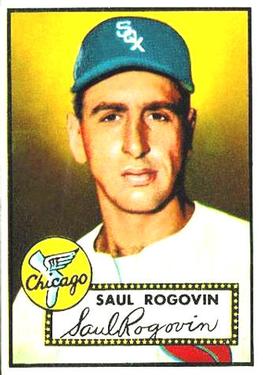 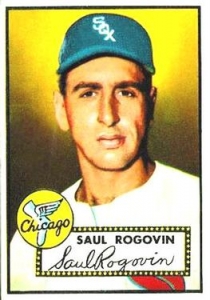 Coming out of the 1951 All-Star break the White Sox were in first, percentage points ahead of the Boston Red Sox. This was heady stuff for a team that had not held the lead this late in the season since 1920 when the soon-to-be-labeled Black Sox were in a three-way race for the pennant. That year their effort was derailed at the end of the season when eight players were suspended for fixing the 1919 World Series.

Years in the second division followed, a couple of third-place finishes in the 1930s and 1941; never serious contenders and by the late 1940s they were back in the second division, finishing last in 1950. But in 1951 fortunes dramatically improved thanks to general manager Frank Lane and manager Paul Richards.

Lane joined the club after 1948 and proceeded to turn the franchise around through a series of shrewd trades – a signature activity of his that down through the years would garner him the nicknames Frantic Frank and Trader Lane. He obtained quality players Nellie Fox and Billy Pierce for next to nothing and engineered a complex trade in early 1951 to bring outfielder Minnie Miñoso to the White Sox. By the All-Star break, these and other transactions brought them to a precarious hold on first place.

Sitting in the stands to watch the doubleheader was the venerable Connie Mack, 88-year-old owner and former manager of the Philadelphia A’s. Little did he know that he was in for 26 innings of play and 6 hours and 45 minutes of baseball. Showing his resolve, the baseball legend watched both games, not leaving Comiskey until 1:17 A.M. the following morning.1

After the All-Star break, Chicago resumed the season hosting Boston in a doubleheader. In front of 52,595 fans, the White Sox lost the first game to the Red Sox, 3-2, thanks to Mel Parnell’s pitching and Clyde Vollmer’s two-run homer in the seventh. A two-run rally by the White Sox in the ninth fell just short. Game two began with Boston rookie Leo Kiely starting, just his second major-league game. Ten days earlier, Kiely had debuted, throwing a complete-game 5-2 win over the Washington Senators. This appearance would further test his mettle.

Countering Kiely, Richards called on Saul Rogovin. Rogovin was another of Lane’s acquisitions, having been traded by Detroit to Chicago just six weeks earlier. Rogovin was in his third year in the majors. His career record with the Tigers had been an unimpressive 3-3 with a 5.56 ERA. Richards had managed and caught Rogovin in the minors several years earlier and saw his potential. When he became available, doubtless at Richard’s urging, Lane brought him to Chicago. The trade rejuvenated his career. His record with Chicago going into the game on July 12 was a deceiving 4-3, but all three losses were by one run. More to the point, his ERA with Chicago was an impressive 2.37. Overall, including his appearances with Detroit, it was 2.92, then second in the league only to Bob Feller.

Rogovin got through the first without Boston scoring. Not so with Kiely. Fox and Eddie Robinson were hit by pitches. Don Lenhardt drove Fox in, Robinson going to third. Then, before a stunned crowd, Lenhardt and Robinson performed a double steal, aided in part by catcher Les Moss’s wild throw to second. Robinson’s steal was unique – he pilfered just 10 bases in his 13-year major-league career – this was the only instance he stole home.2 Kiely got out of the inning without further damage.

Boston came back to score in the second on two singles and Vollmer’s run-scoring double play. When Chicago came to bat in the bottom of the inning it was without Ted Williams on the field for Boston. Williams had to leave with a strained muscle behind his left knee. It was a precautionary move; he returned to the starting lineup two days later. Charlie Maxwell replaced him in the lineup.3 It would be a long night for the 24-year-old future slugger, as he went 0-for-6 dropping his batting average to a minuscule .118.

No further scoring took place until the seventh, when Red Sox’ playing manager Lou Boudreau singled and Bobby Doerr’s 12th home run of the season put Boston up 3-2, a lead that proved short-lived. In the bottom of the inning, Chicago catcher Gus Niarhos led off with a walk, Chico Carrasquel sacrificed him to second, and Rogovin, aiding his own cause, singled Niarhos to third. It was the second of three hits in the game for Rogovin. Bob Dillinger grounded out, sending Niarhos home, and Fox plated Rogovin with the tying run. Kiely was removed and succeeded by Ray Scarborough, who induced Robinson to pop out, ending the threat.

Boston came back immediately when Fred Hatfield singled and an error by Rogovin moved him to second. Dom DiMaggio drove Hatfield home to tie the game, 4-4, going into the eighth. Ellis Kinder replaced Scarborough on the mound and with that a scoreless duel between Kinder and Rogovin commenced over the next eight innings.

In Kinder, Rogovin found a formidable opponent. The 36-year-old Kinder, just two years removed from being a starting pitcher who won 23 games, was now the league’s premier reliever. In 1951 he led the league in games, games finished, and saves – the latter a then unrecorded statistic. He would end the year with an 11-2 record to go with a sparkling 2.55 ERA. Over the next eight innings, Rogovin gave up just three hits; Kinder five.

The closest either team came to scoring came in the 12th when the White Sox combined two singles and a walk to load the bases with just one out. But Floyd Baker’s strikeout and Jim Busby’s inning-ending grounder squelched the threat.

Boudreau opened the top of the 17th with his second hit of the game and went to third on Billy Goodman’s single. Vollmer flied out to Minoso in left for a run-scoring sacrifice. Kinder set the White Sox down quietly in the bottom of the inning, giving Boston a sweep of the doubleheader. The time of the game was 4:01.

Rogovin had gone 17 innings, allowing 10 hits and six walks along the way, giving him a 5-5 record. Kinder’s 10 innings of five-hit, five-walk shutout ball earned him his fifth victory on the year with no losses. More important, their sweep put them into first place, one game over the White Sox and 1½ games over the Yankees. As dramatic as this game was, there was more to come when both teams trudged back to Comiskey for the next game, to be played later that day (July 13).

The game pitted Chicago’s ace, Billy Pierce, against Boston’s somewhat erratic Mickey McDermott. Before 25,211 fans, the teams locked into a 19-inning marathon. Boston scored one in the first and one in the fifth a home run by the hero of the previous game, Clyde Vollmer. Chicago countered with two in the bottom of the inning. In this appearance, McDermott proved outstanding, going 17 innings, giving up just eight hits before giving way to Harry Taylor in the 18th. Pierce threw seven-plus effective innings before Luis Aloma entered the game in the eighth, squelched a bases-loaded threat, and thereafter allowed just one hit over the next five plus innings.

Chicago’s run at first place was basically done for the season. Tied with Boston for a day or so over the next few games, they slowly faded out of the picture as the Yankees, Indians, and Red Sox surged past them. Overall, though, Chicago’s season was a success. The White Sox finished fourth but were in first for seven weeks in the middle of the season. Chicago set a franchise record for attendance (1,328,234), the first time over a million since the inception of their team in 1901, and the first of seven consecutive seasons over a million.

Chicago was a perennial contender in the 1950s, capping off the decade by winning the pennant in 1959 aided by the efforts of players like Fox and Pierce, who first gave them respectability during the 1951 season.

As for Rogovin, his 17-inning performance mirrored the solid season he gave Chicago. He won the ERA championship with a 2.78 mark and showed a 12-8 record. Seven of his defeats were by one run. He was the first pitcher in the American League to win the ERA title while with two teams, having started with Detroit.4 Rogovin fashioned a 14-9 record in 1952, then was plagued by intermittent arm trouble thereafter. His career ended in 1957 after a few brief appearances for the Phillies.

4 Jim Hearn led the National League in ERA at 2.49 while pitching for the Cardinals, then Giants.