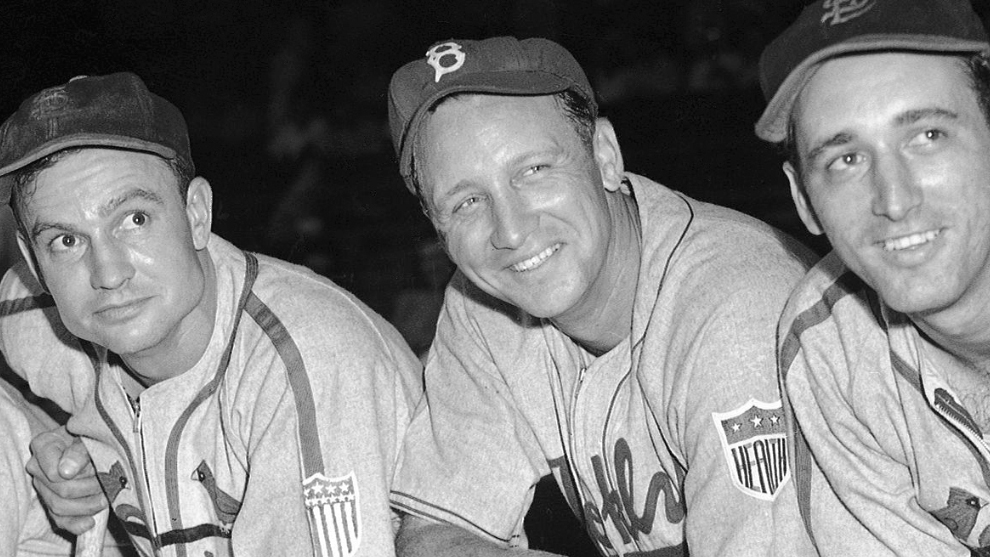 The 1943 All-Star Game was the first one significantly affected by World War II. Fourteen of the 50 players on the roster for the 1942 game were now serving in the military, including Joe and Dom DiMaggio, Ted Williams, Tommy Henrich, Phil Rizzuto, Pee Wee Reese, Johnny Mize, Pete Reiser, Terry Moore, and Enos Slaughter. They were among servicemen around the world who were able to listen to the game courtesy of the British Broadcasting Company, which was broadcasting it via short-wave radio.

A three-run home run by Boston’s Bobby Doerr and the pitching of Washington’s Dutch Leonard, Detroit’s Hal Newhouser, and Boston’s Tex Hughson led the American Leaguers to a 5-3 win, their eighth in the 11 games played.

In keeping with the rules of the time, managers Joe McCarthy of the New York Yankees and Billy Southworth of the Cardinals selected the entire 25-man roster. They were required to include at least one player from each team on the final squad.

National Leaguers had attributed the American League’s success in these games to the Yankees’ dominance. McCarthy, in a slap at the National Leaguers, attempted to demonstrate his league’s overall superiority by keeping all of his Yankees players on the bench. Southworth, on the other hand, had five of the eight Cardinals he had chosen in his starting lineup.

Among them were Mort Cooper, again the starting pitcher, and Stan Musial, the league’s batting leader at .331. Musial was playing in the first of what would be a record 24 consecutive All-Star Games. One Cardinal selected for the game was absent. Left-handed pitcher Howie Pollet had to report for Army duty, so Giants right-hander Ace Adams, originally scheduled to be the NL’s batting-practice pitcher, replaced him on the roster.

The game was scheduled to start at 8:45 P.M., but at the request of the BBC, Leonard didn’t make his first pitch until 9:00. Musial’s first-inning sacrifice fly gave the Nationals a 1-0 lead, but it was short-lived. Doerr’s second-inning home run, which followed walks to Senators catcher Jake Early and Browns center fielder Chet Laabs, gave the Americans a 3-1 lead, one they would never surrender.

The American Leaguers added a run in the third on doubles by Cleveland third baseman Ken Keltner and rookie sensation Dick Wakefield of Detroit. Wakefield, the first rookie to start an All-Star Game since Joe DiMaggio in 1936, was playing in place of the injured Charlie Keller.

Cincinnati left-hander Johnny Vander Meer, who relieved Cooper in the third, struck out a total of six batters in his 2⅔ innings, tying the mark set by Carl Hubbell in the 1934 game. Vander Meer had now struck out 11 American Leaguers in his 8⅔ innings spread over three All-Star Games. That was the same number as Hubbell, whose 11 strikeouts came in 9⅔ innings over five games. The AL did get its final run against him in the fifth, though it was unearned. Pittsburgh’s Rip Sewell and Boston’s Al Javery shut them out over the final three innings.

Newhouser pitched the middle three innings for the AL, allowing three hits and a walk, but no runs. The NL scored single runs in the seventh and ninth innings against Hughson. The run in the seventh came on a triple by Pittsburgh’s Vince DiMaggio and a sacrifice fly by Brooklyn’s Dixie Walker, and the one in the ninth came on a solo home run by DiMaggio, his third hit of the game.

Several National League veterans made memorable appearances in this game. Catcher Ernie Lombardi of the New York Giants, who flied out as a pinch-hitter for Walker Cooper, became the first player to represent three different teams in the All-Star Game. He had previously appeared as a member of the Reds and the Braves. Mel Ott of the Giants and Billy Herman of the Dodgers had now played for the NL in every game since 1934. Ott would play again in 1944, but for Herman this was his final appearance. Herman had been a most effective player for the National League, and his total of 13 hits (in 30 at-bats) was then the All-Star record.

In the home team clubhouse, McCarthy had a simple explanation for not using any Yankee players in the game. “We didn’t need them,” he said. “We got out there in front early enough. Besides, these other boys deserved a chance to shine. The Yankees have had enough of the limelight. Let some of the other guys get some of it.”

The game raised $115,174 for the Army and Navy’s Bat and Ball Fund, while each of the selected players received a $50 war bond. In addition to the $65,174 realized in gate receipts, radio rights brought an additional $25,000, Commissioner Kenesaw Landis’s office contributed $20,000, and each league contributed $2,500.