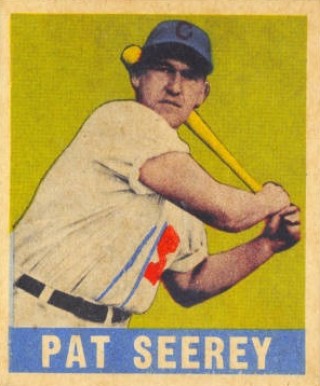 The Philadelphia Athletics were just a half-game behind the Cleveland Indians in the American League after the two teams split their four-game series in mid-July. The Athletics and Indians along with the New York Yankees and Boston Red Sox had battled for first place most of the season. After being tied with the Indians on July 9, Philadelphia hoped to reclaim at least a tie for first as they prepared to face Chicago in a Sunday doubleheader on the 18th. The White Sox were mired in the league cellar with a 25-50 record. They had been there since the end of April and didn’t show any signs of going anywhere after losing seven of their previous nine games.

Philadelphia manager Connie Mack went with Carl Scheib in the first game. The righty had struggled with the Athletics in 1947, finishing with a 4-6 record. But he had turned things around and was making significant contributions to the Athletics’ starting rotation this season. Scheib won four in a row in June before taking his fourth loss of the season in his last outing.

Although Mack was known for moving players to the bullpen if they didn’t do well in the rotation, Scheib had impressed the manager enough to become a regular. Scheib entered the game with a 7-4 record and a 3.58 ERA. Scheib got through the first two innings with relative ease. The only baserunner was Taffy Wright, who walked with two outs in the second.

Chicago’s starter, left-hander Frank Papish, had been used primarily in relief. He made his second start of the season on July 5 and gave up two runs in 6⅓ innings on the way to his first win of the season.

Against the Athletics, Papish struggled from the outset. Eddie Joost led off the bottom of the first with a double. He took third on a sacrifice and scored on a wild pitch. Papish got Don White to ground out for the second out, but continued to struggle with his control. He walked two batters and hit Elmer Valo to load the bases. An infield popup finally drew the half-inning to a close.

Moulder fared no better. White beat out a bunt and the bases were loaded. Joost scored on a fly ball by Ferris Fain. Moulder fanned Hank Majeski but shortstop Cass Michaels couldn’t handle a groundball by Valo and McCosky brought the fifth Athletics run across the plate. A wild pitch moved White to third, but Buddy Rosar grounded out to third.

The White Sox scored a run in the third when Michaels led off with a single and scored from first on a one-out single by Don Kolloway. Then White Sox slugger Pat Seerey led off the fourth with a solo home run that “cleared the roof of the pavilion in left”1 and made the score 5-2.

The Athletics scored a run in their half of the inning. White singled, took second on a groundout and scored on Majeski’s single. In the fifth, the White Sox picked up two runs when Kolloway tripled and scored when Seerey hit a second home run, which landed on the roof over the left field stands2 and made the score 6-4, Athletics. But the game was becoming a seesaw contest. With two outs in the Philadelphia fifth, Joost singled and scored the seventh Athletics run on McCosky’s double.

The White Sox grabbed the lead in the sixth. Bob Savage had replaced Scheib in the fifth. With one out Michaels singled and reached third when Savage threw a wild pitch to pinch-hitter Floyd Baker. Michaels scored on Baker’s fly ball. Then three singles brought home another run and Seerey came to bat for the fourth time in the game. Seerey “hit the roof again to round out a five run inning”3 and put the White Sox ahead, 9-7. Savage was banished and Bubba Harris came in to get the final out.

The White Sox extended their lead in the seventh. Philley reached on an error by Harris on his comebacker. Michaels singled and both runners advanced on a groundout down the first-base line. Kolloway hit a single, his third of the day, and both runners crossed the plate to give Chicago an 11-7 lead.

“The Sox thought they were on easy street,”4 but Philadelphia clawed its way back in bottom of the seventh. Howie Judson, now pitching for Chicago, walked Suder leading off and Harris singled. Joost then hit his 13th home run of the season, bringing the Athletics to within one run of the White Sox at 11-10.

Judson was still unable to find the plate and walked McCosky, who was sacrificed to second by Don White. Judson’s balk moved him to third and when Fain flied to deep center field, McCosky came home with the tying run.

After putting up 22 runs in the first seven innings, neither team scored in the eighth or ninth, and when the game went into extra innings, the 10th. Chicago loaded the bases with two outs in the ninth but reliever Joe Coleman got out of the jam. The White Sox got two on with one out in the 10th, but Lou Brissie, who had taken over from Coleman, struck out Judson and got Kolloway to fly out.

“The Sox had to wait for developments from Pat,” wrote Chicago sportswriter Vaughan, and Seerey came through with his fourth homer after two were out in the 11th, “this one going into the seats.”5 It just the sixth time a major-league player had homered four times in a game. The last time it had been done was in 1938 when Josh Gibson of the Negro National League’s Homestead Grays hit four homers in a game against the Memphis Red Sox.

Former Athletics pitcher George Earnshaw was in the stands for the twin bill. “Big George was able to appreciate just how the A’s staff felt,” reported a Philadelphia sportswriter. “Earnshaw was on the mound — the same mound — that day 16 years ago when [Lou] Gehrig cracked three of his four homers. So Earnshaw watched tensely as Seerey came to bat in the seventh but this time he fouled out to catcher Mike Guerra. Coleman, the fourth Mack flinger, walked Seerey in the ninth. [But] even George Earnshaw suffered in the frenzy among 17,296 spectators” as Seerey’s fourth blast put him in the record books.6

But “that wasn’t exactly the finish,” Chicago Tribune’s Irving Vaughan noted. With Chicago taking the lead by one run, Philadelphia made one last charge. “A single and two passes brought Judson to the end of his rope. Marino Pieretti stepped into the picture, made one pitch and Fain fouled to Luke Appling.”7

The papers noted that “Seerey was not a novice at the game-wrecking business.”8 He had knocked out three round-trippers along with a triple on July 13, 1945 as he led the Indians past the Yankees, 16-4.

Seerey’s heroics gave the lowly White Sox a three-game winning streak. He also received a $500 bonus from a Philadelphia scorecard advertiser. The merchant had offered $300 for any player who hit three home runs in a game. The advertiser called the ballpark and promised Seerey $500 if he hit his fourth. Seerey did and collected his prize.9

The game took 3 hours and 44 minutes to complete. With the afternoon quickly drawing to a close, the two teams took a brief break before returning to the field. They needed to get in the second game before Pennsylvania’s Sunday curfew law went into effect.

Bill McCahan took the mound for Philadelphia. McCahan had failed to win in four starts so far in the season. He had pitched a complete game in his last appearance, but took the loss against the Red Sox when the A’s were blanked.

Bob Gillespie started for the White Sox. The righty was also looking for his first win of the season. Lyons had used Gillespie as both a starter and reliever. His last start was on June 7, when he lasted just three innings after the Washington Senators tagged him for five runs and five hits.

After McCahan got the White Sox out in order in the first, his teammates gave him a one-run lead in bottom of the frame. McCosky singled, moved to second on a groundout, and came home when Fain singled to right field.

The White Sox came back in the second. McCahan, “fearing Seerey, issued him a pass with none out,” Vaughan commented.10 Taffy Wright’s single pushed him to third, and he scored on a grounder. Philley eventually reached third, but the White Sox couldn’t bring him home. Chicago almost grabbed the lead in the third. Kolloway led off with a single. He would have scored but Baker’s drive was ruled a ground-rule double when the ball went through the outfield fence. McCahan got the next two batters to fly out. Seerey came to bat twice more but he failed to get a hit either time.

The game stayed tied until the fifth inning. After McCahan got the White Sox out in the top of the fifth, the Athletics needed to score to earn the win before the game was called. They came up with four. “The Mack men slayed Gillespie with four hits, two passes and for good measure [Taffy] Wright tossed a fumble,” Vaughan wrote.11

Mike Guerra and Suder singled. Guerra went to third and Suder took second on the throw-in. Pitcher McCahan then singled both runners home.

The A’s weren’t done. Joost sacrificed McCahan to second, and Gillespie wild-pitched him to third. Gillespie walked McCosky and Coleman to load the bases. When Fain singled to right field, two more runners scored and Coleman got to third on right-fielder Wright’s throwing error. Majeski flied out to center field. Coleman tagged up and scored before Fain was thrown out trying for third.

With five innings complete and the Athletics up by five runs, umpires called the game and awarded the victory to the Athletics. Their split and the Indians’ sweep of the Washington Senators left Mack’s team a game and a half behind Cleveland. Philadelphia stayed in the race for most of the summer, but lost nine of their last 10 games and finished in fourth place.

After his production in Philadelphia, Seerey hit only eight more home runs to finish with 19 for the season. He struck out a league-leading 102 times. It was his last full season in the major leagues; he played in only four games for the White Sox in 1949 and spent most of the season in the minors. Seerey retired after the 1951 season.