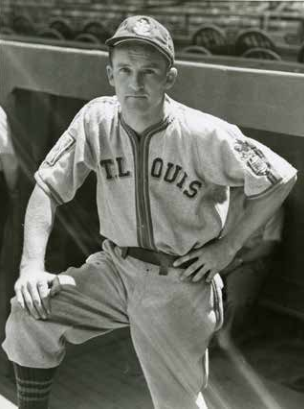 George McQuinn led the offense as the Browns swept the Boston Red Sox, 9-3 and 4-3, in a doubleheader at Sportsman’s Park on July 19, 1941. McQuinn’s 4-for-5 performance in the first game included the only batter’s cycle of the 1941 season.

McQuinn, considered the best defensive first baseman in the American League at the time, was member of the American League All-Star Team in 1939 and 1940, and would be an All-Star three more times after that.1 As a fielder he was compared with Joe Kuhel, Hal Chase, and Hall of Famer George Sisler.2

This pleasant Saturday afternoon was Ladies Day as Sportsman’s Park. Women were admitted “without even having to pay tax and service charge and everybody receiving a cloisonné lapel pin, or a radio or a diamond wrist watch,” a St. Louis sportswriter noted with a chuckle.3 Nonetheless, the announced attendance was a mere 2,620. (Two weeks earlier, the Browns had combined Ladies Day, Stockholders Day, Children’s Day, and Soldiers Day to entice fans to the ballpark. J. Roy Stockton, the baseball beat writer for the St. Louis Post-Dispatch, commented, “You can see what’s wrong with the Browns. They just don’t give away enough things. One day they gave away tickets, five to each of the stockholders, and they won two games. Then they gave away admission and radios and lapel pins and watches and they win two more.”4)

Johnny Allen (1-5) and Elden Auker (6-11) were the starting pitchers for the Browns, facing Broadway Charlie Wagner (4-5) and Mickey Harris (3-8) of the third-place Red Sox.

Future Hall of Famer Dizzy Dean was nine days into his new job as the play-by-play broadcaster for Browns and Cardinals home game on St. Louis radio station KWK. in St. Louis. A Boston scribe wrote, “Opinion here is divided on Dizzy’s descriptive ability, his supporters claiming that the erstwhile great one’s homespun philosophy will overcome the frequent errors of identity he makes.”5

After Wagner retired the first two batters in the bottom of the first innings, McQuinn “inaugurated the bombardment … by whacking his 11th round-tripper over the whole right-field works.” The ball sailed over the right-field pavilion roof. An inning later Joe Grace homered, sending the ball bouncing off the pavilion roof. In the third, McQuinn tripled with two outs and scored on Wally Judnich’s single to right, making the score 3-0. After Wagner walked Roy Cullenbine, he was lifted for Jack Wilson, who retired Grace on a grounder to second to end the inning.

St. Louis was facing a lineup with five All-Stars,6 yet the 37-year-old Allen, a former 20-game winner who appeared to be on his last legs, cruised. His only major hiccup came in the top of the fourth inning, when Boston’s Lou Finney led off with a single, raced to third on Stan Spence’s double down the third-base line, and scored (and Spence advanced to third) on a passed ball by catcher Rick Ferrell which a Boston sportswriter opined could have been ruled a wild pitch.7 Red Sox player-manager Joe Cronin stroked a double, his 100th hit of the season, driving in Spence. Jimmie Foxx followed with a walk, and he and Cronin advanced on a wild pitch. Allen retired the next two batters, but Browns shortstop Johnny Berardino misplayed Johnny Peacock’s grounder and Cronin scored the third run for Boston to tie the game.

The Browns immediately roared back, sending 10 batters to the plate against Wilson and Nels Potter in the bottom of the fourth and scoring four runs, all after two men were out. They used four singles (one by McQuinn), a walk, and a hit batsman to plate the runners, leaving the bases loaded.

The Browns put runners on base in every inning except the eighth. McQuinn doubled off Potter with one out in the sixth to complete the cycle. In the bottom of the seventh, with the score 7-3, Grace led off with a walk, then back-to-back doubles by Berardino and Rick Ferrell gave St. Louis two more runs. There was no more scoring. The Browns pounded out 12 hits and drew six walks.

After the Boston fourth, Allen allowed just four singles and two walks the rest of the game. His wild pitch was his eighth of the season. By limiting the Red Sox to two earned runs, Allen lowered his ERA to 6.24. He made one more start for the Browns, on July 24, before being placed on waivers.8

McQuinn completed his cycle in four successive at-bats. The first baseman scored three runs and drove in two in the first-game victory. He then had a 1-for-4 performance in the nightcap, which the Browns won, 4-3. McQuinn scored one of those runs. (Fans would have to wait two years, until July 3, 1943, before the next cycle in the major leagues, by Red Sox rookie outfielder Leon Culberson.)

The next day, July 20, featured another doubleheader between the Red Sox and the Browns. Again the Browns swept, 6-3 and 10-0. All three Red Sox runs in the first game came on a pinch-hit home run by Ted Williams in the ninth inning, “all that saved the relapsing Red Sox from a double dose of whitewash.”9 McQuinn hit three home runs in the twin bill, two in the first game and one in the second. For the twin bill, he was 5-for-8, with four RBIs and five runs scored. His batting average at the end of the day was .322, but he tailed off considerably and finished the season at .297.

In sweeping the Red Sox in two doubleheaders, the Browns had won seven of their last eight games and “looked like a team that might make a loud noise the remainder of the season,”10 though after the two sweeps they were still deep in seventh place with a 34-51 record, 24½ games behind the league-leading New York Yankees. The Browns had been in seventh or eighth place in the American League since May 1. After the July 19 sweep, the Browns won 38 and lost 33, sneaking into sixth place. On June 5 Luke Sewell had taken over as St. Louis manager, succeeding Fred Haney. His record for the remainder of the season was 55-55. Sewell stayed at the helm through 1946, taking the Browns to the World Series in 1944. For the Red Sox, Joe Cronin was in his seventh of 13 seasons as manager. In 1941 the team won 84 games and lost 70 (.545), and finished in second place, 17 games behind the Yankees. In 15 seasons as manager for Washington and Boston, Cronin’s winning percentage was .540, so this was a “typical” season. He did win the American league pennant in 1933 with the Senators and in 1946 with the Red Sox. (Cronin relinquished the managerial reins to become the Red Sox general manager in 1948, and later served from 1959 until 1973 as president of the American League.)

Coincidentally, the previous time a player hit for the cycle at Sportsman’s Park, it was before a Ladies Day crowd. The Cardinals’ Johnny Mize did it against the New York Giants on July 13, 1940. The Cardinals swept a doubleheader that day, too.11

8 On July 30, 1941, Johnny Allen was selected off waivers by the Brooklyn Dodgers, and spent parts of the next three seasons with Brooklyn.