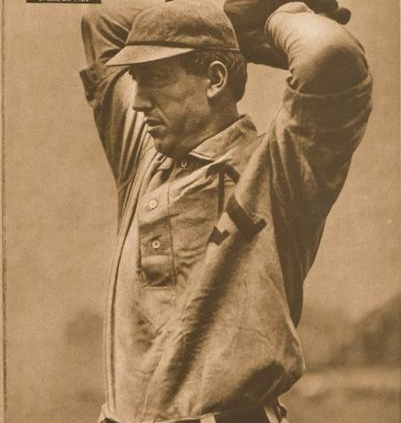 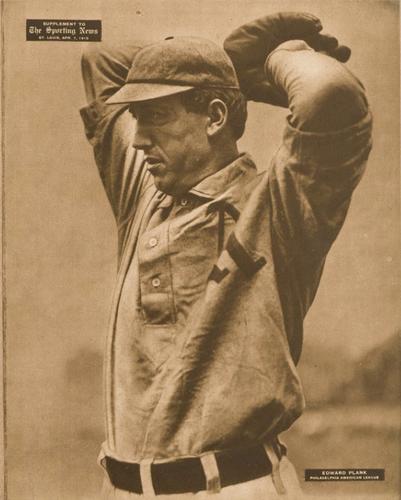 In the first game of a doubleheader on July 22, 1917, in front of approximately 10,000 fans at Sportsman’s Park in St. Louis, the Browns’ Eddie Plank shut out the Washington Senators, 4-0, to notch his fifth win of the season, 326th career win, and 69th lifetime shutout. He never won another major-league game.

Plank gained his fame pitching for the Philadelphia Athletics from 1901 to 1914. The Athletics won six American League pennants and three World Series championships in those years, and only once failed to play .500 ball. While toiling for the A’s, Plank chalked up a 284-162 record.

The Browns could not sustain those winning ways in 1917. By July 22 Washington (34-51) and St. Louis (35-54) were battling for the meager prize of sixth place in the American League. So far, each team had beaten the other five times; in the current series, St. Louis had won two of three.

Plank took the hill with a 4-3 record. He had failed to beat the Senators in two earlier encounters. On May 18, Washington tagged Plank for 10 hits and eight runs in seven innings, handing him his first loss of the season. The Senators were aided by five St. Louis errors, leading to five unearned runs in the 8-2 romp.

In a June 1 rematch, Plank was lifted for a pinch-hitter in the eighth, trailing Walter Johnson, 2-0. The Browns rescued Plank by scoring two runs in the ninth, and two more in the 10th, pinning Johnson with a 4-2 loss, and handing Browns reliever Jim Park the last of his four major-league wins.

Plank came into the July 22 game with a hot hand. In his most recent outing, on July 17 against Boston, the methodical left-handed hurler beat the two-time reigning World Series champion Red Sox 3-2, and retired Boston’s final 19 batters without allowing a ball to leave the infield.

Washington right-hander Jim Shaw opposed the Browns. Shaw’s 9-7 record included a 7-4 win over St. Louis in June. Shaw’s most recent start had resulted in a 6-5 win over the league-leading Chicago White Sox on July 15. He was the Senators’ winningest pitcher so far in 1917 despite a 3.69 ERA, well above the league average.1

The Senators threatened to score against Plank in the first inning. Joe Judge opened the game with a single, but was forced at second base on Eddie Foster’s grounder. With Foster at first, Clyde Milan singled to right, and Foster raced to third, sliding in safely when Jimmy Austin dropped the throw from right fielder Tod Sloan. Sam Rice slapped a ball directly to second baseman Del Pratt, who threw Foster out at home. The third out followed, and the Senators did not get another hit until there were two out in the sixth inning.

The Browns grabbed the lead in the fourth inning thanks to Washington’s defensive charity. Austin began the attack with a single, and on shortstop Howie Shanks’s error, Austin dashed to second, and Sloan reached first.

With two aboard, George Sisler ripped a liner, but it rocketed directly to left fielder Horace Milan for the first out. Browns manager Fielder Jones signaled hit-and-run, and Pratt chopped a high bounding ball fielded by first baseman Judge, who attempted to force Sloan at second. But Judge threw wildly into left field, and the off-kilter throw allowed Austin to score, Sloan to reach third, and Pratt to trot into second base. Hank Severeid singled to center, scoring Sloan and Pratt, and putting St. Louis on top, 3-0.

The Browns added a run in the seventh. Baby Doll Jacobson singled to center and advanced to second on Doc Lavan’s single to right. Plank moved both runners up with a sacrifice, and Burt Shotton lifted a fly ball caught by Washington’s center fielder Rice. Jacobson broke for home, and “scored under a high throw” from Rice to catcher Eddie Ainsmith.2

Jacobson’s run was the final tally, and with Plank going the distance, the Browns won, 4-0. St. Louis climbed into sixth place, 5 percentage points ahead of Washington.

According to J.B. Sheridan of the St. Louis Globe-Democrat, “Plank was simply great,”3 and Washington never seriously threatened to score after the first inning. The Senators collected seven hits, but “Plank kept them as scattered as autumn leaves.”4 Since Plank had blanked Boston over the final six innings of his last start, he now had a string of 15⅓ consecutive scoreless innings.

The Washington Herald explained why Plank was so effective: “A slow ball was the particular delivery which caused the Griffiths to pop to the infield, roll slow bounders to the infield, and elevate easy putouts to the outfielders. Occasionally Eddie delivered a fast one, but it wasn’t very fast. However, he had control — down around the knees and close to the chin — just the spot where the batter did not want it.”5 He struck out one and walked two.

In an on-field ceremony between games of the doubleheader, the Browns’ Jacobson received $50 from a tobacco company for having hit the “Bull Sign” at New York’s Polo Grounds with a batted ball on June 12.6 He was the first American Leaguer of the season to perform the feat.7 The cash prize was no small thing, considering that the Browns paid Jacobson just $1,800 in 1917 ($11.69 per scheduled game).8

Jacobson’s award was the last good news of the day for St. Louis. Doc Ayers shut out the Browns in the second game, 5-0, and Washington regained sixth place.

The doubleheader marked the end of a long homestand during which St. Louis won 12 and lost 17. The next evening St. Louis boarded a train for Boston. The Browns did not play at home again until August 17 after 22 road games in Boston, New York, Philadelphia, Washington, and Detroit.

Fans leaving Sportsman’s Park on July 22 had no reason to think they had witnessed Plank’s final win. After all, the baseball season stretched for two more months, and Plank had just thrown back-to-back gems. He appeared healthy, and was pitching well. Plank’s 5-3 record and 1.99 ERA belied his 41 years. Surely, he would win a few more — even with the woeful Browns.

The press had no more insight than the fans. Reporters universally praised Plank’s skill, and presumed that his career was far from over. Earlier that summer Plank stirred L.C. Davis of the St. Louis Post-Dispatch to turn poetic:

The kid is really clever!

Goes on and on forever.

He has a weather-beaten phiz,

His legs may not be limber;

But still, at forty-two [sic] he is

A tough old piece of timber.

When Eddie goes upon the hill

He gives his cap nine twitches,

Then walks around the box until

The batter fumes and itches.

To throw them carefully and slow,

Is always his endeavor;

For pitchers come and pitchers go,

But Plank goes on forever.”9

Plank started three games on the Browns’ lengthy Eastern road trip. He threw well, but lost each time, as St. Louis descended to eighth place. In Boston Plank stretched his scoreless streak to 19⅔ innings before losing 3-2 in the 12th. New York topped him 3-1; and on August 6 in Washington — again matched against Johnson — he was beaten in the 11th inning, 1-0.

In 29 innings Plank had surrendered 18 hits and 11 walks, and only four of the opponents’ seven runs were earned. He lowered his ERA to 1.79 despite taking three losses.

The Browns returned to St. Louis without Plank. On August 14 — still upset by his 1-0 loss to Washington, and the team’s poor prospects — he announced his immediate retirement.10 Not even a lucrative salary could overcome his distaste for losing.11

The author consulted Baseball-Reference and Retrosheet.org for box scores and other pertinent data and obtained descriptions of the play-by-play from newspapers listed in the notes.

11 “Plank Quits Game Rather Than Play with Losing Club.” The article lists his salary as $5,500. According to Baseball-Reference, it was $4,500.