This article was written by Casey Tibbitts

Professional baseball in the 19th century produced many notable firsts and many colorful characters, but rarely were the two combined as they were on July 28, 1875. On that warm midsummer day 21-year-old Joseph Emley Borden, in just his third start for the Athletics of Philadelphia of the National Association, etched his name firmly in the history books by pitching professional baseball’s first no-hitter. 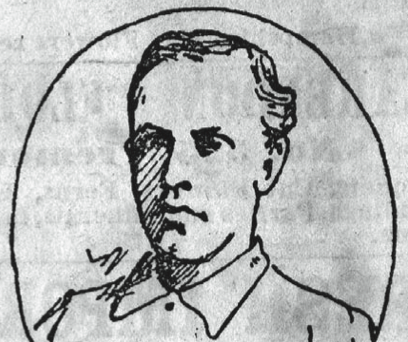 In July 1875 the National Association of Professional Base Ball Players, baseball’s first professional league, was midway through its fifth and final season. Borden came to the Philadelphia club only because Cherokee Fisher, the team’s hard-drinking pitcher, had clashed with team captain Mike McGeary and was released. To fill the hole the club lured away Chicago’s George Zettlein, one of the better hurlers in the league. But Zettlein was slow to arrive in Philadelphia, so McGeary was forced to turn to the local amateur teams for an interim solution.1 He found Borden, whose style John Morrill would later describe as “so entirely different from every one else that nobody could hit him.”2

Borden agreed to pitch for Philadelphia but only if he was listed in game accounts and box scores as Joseph E. Josephs, evidently to keep his well-heeled family in New Jersey from discovering that he was playing baseball for pay. (He was also known to have played as Joseph Nedrob, Borden spelled backwards). 3

McGeary agreed, and Borden, now Josephs, joined the club on July 24 for its game against the crosstown rival Athletics at the Jefferson Street Grounds. It was an inauspicious debut, as Borden and the White Stockings lost 11–4 before a crowd estimated at 1,000. Two days later the Chicago White Stockings arrived for the first of two scheduled games, and Borden again was defeated, this time by a score of 5–1.4

The clubs squared off again for the series finale two days later, on Wednesday, July 28, and this time Borden’s fortunes took a dramatic turn. He defeated the visitors 4–0 and in the process pitched the first no-hit game in the short history of professional baseball. His performance instantly made him a star.5

Borden, still known as Joe Josephs, started four more games for Philadelphia. His first two outings after the no-hitter were losses, but he earned his second win of the season with an outstanding 16–0 shutout of St. Louis on August 9, defeating an 18-year-old Pud Galvin. At this point Zettlein arrived and took over the pitching chores. Borden started one last game, on September 2, tying Boston and Albert Spalding 8–8. He left the team with a record of two wins and four losses in seven starts.6 But Borden still had two significant games to play.

In 1876 the National Association folded and the National League was formed to take its place. Harry Wright moved his champion Boston team into the new league, but in the process lost Spalding to Chicago. To fill the void created by the defection of his star pitcher, he signed Borden to an unheard-of three-year contract at the princely sum of $2,000 per season. Local sportswriters immediately hailed him as Spalding’s successor and dubbed him “Josephus the Phenomenal.”7

The following month Borden narrowly missed out on yet another first when Boston defeated the Cincinnati Red Stockings 8–0, with Borden allowing only two hits. The official scorer that day was O.P. Caylor, whose practice it was to count bases on balls as hits. In 1950 historian Lee Allen researched the game and argued that the hits had actually been walks, and that Borden should have been credited with the National League’s first nohitter. It remains uncertain how Caylor actually scored the game.9

Borden started 18 of Boston’s first 19 games in 1876 before showing signs of arm soreness and fatigue. He yielded the box for five starts, then returned for five more. On July 15 he pitched an embarrassing 15–0 loss to Chicago and Spalding.10 Frustrated with his performance, Wright dropped Borden, still only 22, from the team. His final totals for the year were 11 wins and 12 losses in 24 starts.11

Since Borden was still under contract, the club put him to work taking tickets, cutting the grass, and mending the fences, hoping he would quit and void the agreement. But he went about his new job cheerfully, and the club bought him out at the end of the season.12 He later found work stitching baseballs, and was erroneously reported to have died in the Johnstown Flood of 1889.13 In fact he passed away in 1929 at the age of 75, his name firmly written in baseball lore as the man who pitched professional baseball’s first no-hitter. 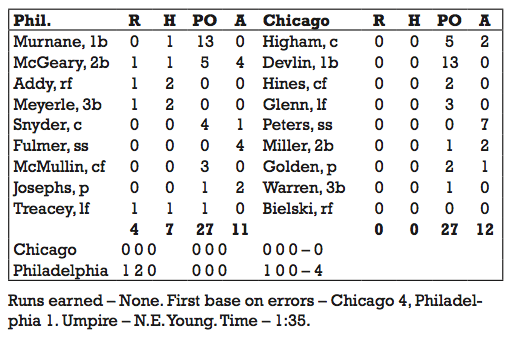