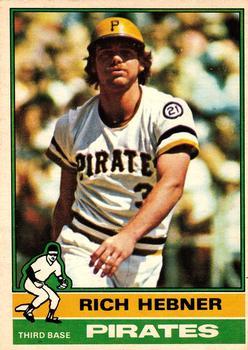 Richie Hebner entered the 1976 season without a contract. Given what the Pittsburgh Pirates wanted to pay him, it’s understandable.

General Manager Joe L. Brown offered a 20 percent pay cut—the highest reduction allowed—after Hebner, who had broken into the majors playing in two games with the Pirates in 1968, refused to agree to an undisclosed, smaller cut. The salary offer was a response to faltering in 1975. A lifetime .287 hitter at the beginning of the ’75 season, Hebner hit just below .250.1

He still hadn’t signed his 1976 contract with the Pirates when he got ready for a game against the New York Mets on July 28. “Sure, I’d probably be better off with a contract,” admitted the third baseman. “My mind might be more at ease. But I haven’t talked contract with [general manager Joe L. Brown] in more than a month. But I’m not staying up nights worrying about it. I just want to get my average up and see what happens.”2

He reached his goal, notching a 3-for-5 night with two singles off Tom Seaver and a game-winning solo home run off Ken Sanders in the top of the 13th inning to break a scoreless tie at Shea Stadium.

The Pirates came into Queens for the last two games of an eight-game road trip. They had not fared well in their preceding contests against the Philadelphia Phillies and St. Louis Cardinals, compiling a 2-4 record. New York was opening a homestand after a 3-4 road trip against the Cincinnati Reds, Montreal Expos, and Phillies.

Both squads were far behind the first-place Phillies, who dominated the NL East with comfortable margins: 12½ games separated them from the Pirates and 16½ from the Mets. The Phillies held off the Pirates’ September charge to win their first of three straight NL East titles but lost to the Reds in the playoffs.

Medich was familiar with Shea Stadium, having pitched there in 1974 and 1975 with the New York Yankees.3 While Yankee Stadium was being renovated, the Yankees used Shea as their home field.

Acquired in a four-player deal with the Yankees in December 1975,4 right-hander Medich showed strength for the Pirates as he struck out four Mets in the first three innings. He enjoyed a clutch moment when he struck out Bud Harrelson to end the second inning with Felix Millan and Ed Kranepool on first and third. Though they had no strikeouts in the next three innings, the Mets went three-up, three-down.

Seaver raised his whiff total to seven in the top of the fifth, striking out Taveras and Al Oliver. Medich became Seaver’s eighth strikeout when he whiffed in the top of the sixth; Taveras was number nine an inning later.

Pittsburgh had the makings of a rally in the eighth, causing some frustration among the Mets fans throughout the Shea Stadium crowd of 22,215. Dave Parker walked with one out and stole second base; Seaver walked Hebner. The momentum halted when Ed Kirkpatrick struck out, then Mets third baseman Mike Phillips fielded Sanguillen’s grounder and fired to Millan at second base to force Hebner.

There was another moment of hope in the ninth for the visitors. After Medich grounded out, Taveras was hit by Seaver and stole second. He was stranded when Rennie Stennett grounded to Phillips at third base and Oliver grounded to Millan.

Phillips began the bottom of the 10th with a single and reached second on Jerry Grote’s sacrifice bunt down the first-base line; Stargell fielded it and flipped to second baseman Stennett covering the bag. Medich got the second out with Millan’s grounder to third baseman Hebner, as Phillips held at second.

With the potential winning run in scoring position, skipper Joe Frazier pulled Harrelson and used the pinch-hitting services of Jim Dwyer, a newly christened Met obtained in a trade with the Montreal Expos a week earlier. But Dwyer didn’t need to swing the bat; Medich walked him intentionally. Joe Torre struck out pinch-hitting for Seaver, who batted .085 in ’76.

Both teams had pitching changes at the beginning of their respective halves in the 11th inning—Sanders took over for Seaver; Dave Giusti replaced Medich. Additionally, Frazier switched his infield defense after the pinch-hitting—Roy Staiger patrolled third base while Phillips took over for Harrelson at shortstop.

Sanders gave up a one-out single to Sanguillen in the 11th and retired the formidable trio of Stennett, Oliver, and Stargell in the 12th. But the Mets offense stayed similarly stagnant. John Milner was the only Met to get on base thanks to his single with two outs in the 11th.

Hebner’s bash into the right field stands5 in the top of the 13th gave the Pittsburghers the only run they’d need. Giusti walked Pepe Mangual with two outs in the bottom of the inning, but any visions of a come-from-behind victory were squelched with Bruce Boisclair’s game-ending fly ball to Kirkpatrick in left field.

Sanders was not Frazier’s first choice to take the mound. He cited the Mets skipper’s reasoning: Skip Lockwood was “tired” and Bob Apodaca “hasn’t been pitching well.” For Sanders, the opportunity to show his stuff was vital. “Not pitching often puts extra pressure on me,” said the 35-year-old righty. “I feel every time I go out I have to pitch a shutout or I won’t pitch again for 10 or 12 days. At least that’s been the pattern this season.”6

It was a golden night for Hebner. Besides the home run, he had two other hits. Stennett went 2-for-6, Sanguillen, 2-for-5.

Indeed, the Pittsburgh Press highlighted that Hebner had a .227 average, factoring in his two singles and game-winning home run. But his lament belied recent success—Hebner was batting .347 for the last month in games that he started, including 11 RBIs.10

A cornerstone of the Pittsburgh lineup since 1969, the third baseman was benched in July 1976 for Bill Robinson, who had a hot bat in the spring. Robinson, regularly an outfielder, had started 18 of the last 26 games at third base and the last five consecutive games coming into the July 28 contest against the Mets. He batted .303 in 1976 and played in 122 games.

Dave Parker recounted Hebner’s situation during the ’76 All-Star break in his 2021 memoir Cobra. “Hebner still hadn’t signed his contract and was very unhappy with his situation,” remembered the slugger. “Bad back, ankle and shin injuries, he also couldn’t generate much power, but he wanted to play to get his numbers. We all knew he’d be filing for free agency at the end of the season.”11

Hebner played the rest of the 1976 season without a contract, finishing with a .249 average in 132 games. He left the Pittsburgh organization after the season and signed with the Phillies as a free agent for a five-year deal in the neighborhood of $500,000.12

His later stints involved the Mets, Tigers, a second tenure with the Pirates, and two years with the Cubs at the end of his career. Hebner retired in 1985 with a lifetime .276 average.

The loss furthered Seaver’s victory drought. New York sportswriter Murray Chass reminded readers that the Mets icon had suffered a no-decision four times in the last six games.13 It was an ongoing concern in ’76—Seaver went 14-11 but started 34 games.

Medich’s performance was not as stellar, but still enviable. Ten innings, five hits, six strikeouts. “I’m going back to basics,” the right-hander said. “Back to what I was successful with in the past. I just want to throw my first pitch down the middle of the plate to give myself some room to work.”14

It was enough room to match one of the best pitchers in baseball. But the 1976 Mets had some challenges in mounting offensive threats anyway, causing Phillies reliever and former Met Tug McGraw to opine after the previous night’s game against his former team: “If you don’t pitch well against the Mets you better look in the mirror and ask yourself what’s happened. They’re not known as one of the toughest hitting teams.”15

The loss came a week after the Mets traded Wayne Garrett and Del Unser to the Expos for Dwyer and Mangual. Garrett had been on a rookie on the ’69 Miracle Mets. In the July 28 game, only four players remained from that team—Harrelson, Grote, Kranepool, and Seaver.

New York’s NL team had a .246 team batting average in 1976, which tied with the Giants for third lowest in the league. Still, the Mets compiled a respectable 86-76 record for the Bicentennial season.

3 Medich started his career with the Yankees in 1972.

7 The 1969 season was Hebner’s first season as an everyday major-league player. He played in two games for the ’68 Pirates.

10 Smizik, “Hebner’s Winning HR a Treasure for Whom?”