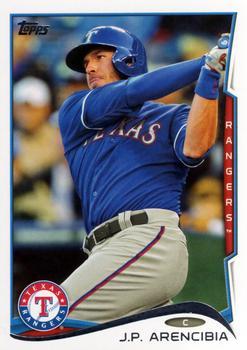 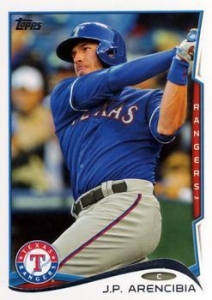 Drafted out of the University of Tennessee by the Toronto Blue Jays with the 21st overall pick of the 2007 MLB Amateur Draft, J.P. Arencibia1 blossomed in 2010. After hitting .303 and slamming a minor-league-leading 31 homers2 in Triple-A Las Vegas, he was called up to the Blue Jays when their starting catcher, John Buck, went on the disabled list with a cut to his thumb.

Batting ninth in his major-league debut on August 7, Arencibia exploded onto the scene with one of the greatest debuts ever. He blasted a two-run homer on the first pitch3 from Tampa Bay pitcher James Shields.4 In his next two at-bats, he doubled and singled before capping his big day with another homer, a solo shot against Dale Thayer.5

Arencibia’s performance made him just the fifth major leaguer to homer twice in his debut and the first modern player to add two other hits in the same game.6

“I imagined I would at least have one strikeout in my debut because of my nerves,” said Arencibia. “I couldn’t have written it up any better or dreamed it any better.”7

After his fast start, Arencibia cooled off immediately; he collected one hit in his next 16 at-bats and was sent back down on August 18 when Buck was reactivated.8 Arencibia was recalled on September 1 but went 0-for-15 in six games to finish the season with a .143 batting average.

Following the 2013 season, Arencibia left the Blue Jays after hitting .212 with 64 homers and 193 RBIs in 380 games. He signed as a free agent with the Texas Rangers for 2014 and was hitting .152 with 4 homers and 15 RBIs as they entered the middle game of a three-game series against New York on July 29.

The Yankees entered the contest having lost three straight and had dropped to 54-51, which put them in third in the AL East, 4½ games back of Baltimore. The Rangers had won just five of their last 26 games and were dead last in the AL West at 42-64, 23½ games behind first place Oakland.

After going 3-for-5 with two home runs the previous day, Brett Gardner staked New York to an early lead when he belted Martinez’s second pitch of the game over the wall in right-center. The Yankees threatened to get more when Derek Jeter singled and Mark Teixeira drew a one-out walk,10 but Martinez retired Carlos Beltran on a popup and Brain McCann on a grounder to second.

McCarthy started strong by striking out Shin-Soo Choo and Elvis Andrus but allowed a double to Alex Rios and a walk to Adrian Beltre before Jim Adduci grounded to first.

In the second, McCarthy worked around Arencibia’s leadoff double but ran into trouble in the third. After retiring the first two batters, he allowed singles to Rios and Beltre followed by Adduci’s RBI single. Arencibia followed with a liner to left for a double to score two runs and give the Rangers a 3-1 lead.

The Rangers threatened again in the fourth. Robinson Chirinos singled but was caught stealing. Choo and Andrus followed with singles but were stranded.

Arencibia’s homer down the right-field line in the fifth increased the lead to 4-1.

After his first-inning walk to Teixeira, Martinez faced the minimum in the next four innings. He allowed just a third-inning double to Gardner, who was thrown out trying to reach third on Jeter’s grounder; Jacoby Ellsbury then bounced into a 3-6-1 double play.

Martinez had retired seven consecutive batters entering the sixth inning, but the Yankees exploded for seven runs—their highest-scoring frame of the season.11

Gardner led off with a grounder to right for a double. Jeter bounced a ball up the middle off Martinez’s glove and was thrown out by Texas shortstop Andrus—but the call was overturned when Yankees manager Joe Girardi challenged the ruling; Jeter was safe12 while Gardner remained at second on the play.

After Ellsbury popped out foul to third base, a wild pitch advanced the runners. Teixeira walked to fill the bases. Beltran grounded a single to first to score Gardner and Jeter and move Teixeira to third; Brian McCann’s fly to center tied the game.

When Martinez walked Chase Headley, Rangers manager Ron Washington replaced his starter with Shawn Tolleson, who allowed an RBI single to Zolio Almonte and a two-run double by Brendan Ryan. The final run scored when Gardner lined a shot to right-center that glanced off Rios’s glove and bounced off the head of center fielder Leonys Martin for a three-base error.13

The Yankees increased their lead to 10-4 in the seventh against Roman Mendez. Ellsbury and Teixeira walked and Beltran singled to load the bases. Headley’s one-out single plated Ellsbury; Almonte forced Headley at second with Teixeira scoring on the play.

With a six-run cushion, New York’s normally reliable bullpen struggled. Adam Warren replaced McCarthy in the seventh. Andrus walked and Rios singled him to third. Andrus tried to score on Beltre’s bouncer back to Warren but was thrown out.

When Adduci walked to fill the bases, Girardi brought in Dellin Betances to face Arencibia. After working the count full, Arencibia launched his second homer—a grand slam to left field—to make the score 10-8.

“I’m just trying to throw a strike in that situation; bases loaded, [3-and-2 count], I don’t want to walk him,” Betances said later. “It wasn’t a strike, but he put a good swing on it.”14

Texas threatened for more when Martin tripled with one out and Rougned Odor walked with two outs but Choo struck out.

The Yankees got two runs back in the eighth against Neal Cotts; Gardner started the inning with a single and scored on Teixeira’s two-out homer.

Texas plated a run in the bottom of the inning against Chase Whitley. Andrus singled, stole second, and advanced to third on Rios’s groundout; he scored when Beltre bounced out to second.

With New York holding a 12-9 lead, Girardi turned to his closer, David Robertson, to secure the win. Arencibia led off and was retired for the first time when he struck out swinging.

Martin bounced a single up the middle and took second on defensive indifference; Chirinos walked to bring the tying run to the plate.

Daniel Robertson ran for Chirinos. Both runners moved up when Odor grounded out to first.

Choo walked to load the bases. Andrus slapped a single to center to score Martin and Robertson. Adam Rosales ran for Choo and represented the tying run.

Rios drew a walk to load the bases again but Robertson survived, earning his 27th save, when he got Beltre to fly to the warning track in left field to end the game.

“I feel like the luckiest guy on the Earth right now for escaping that inning as bad as I pitched,” Robertson remarked. “It was by the skin of my teeth I got it done.”15

The win was an anomaly for New York; it was just the fourth win in 40 games in which the Yankees pitching staff had allowed five or more runs.16 It was just the third time they had scored in double digits, and the first time since April 24 at Boston.

“It was a strange game, but it’s great to get out of here with a win,” Girardi admitted. “It would have been a really difficult one to lose.”17

“Let (the bullpen) have a hiccup because they have been picking us up all year long,” Teixeira said. “It was kind of our night for the offense to pick those guys up.”18

“The offense really stepped up today,” said Robertson. “I wish the bullpen would have done a little bit better, but we got a win. We’ll take it.”19

The Yankees finished the year 84-78; they moved up to second in the AL East—but finished 12 games behind Baltimore. Texas never escaped the AL West cellar, finishing 67-95.20

The following season would be his last; after signing as a free agent with Baltimore on January 7, he was released on April 9 before playing a game with the Orioles.

Arencibia signed with Tampa Bay eight days later. In late August he earned another trip to the majors; he played in 24 games for the Rays, hitting six home runs and driving in 17 runs.

The author attended this game with his wife and son on the way home from his son’s participation in the Cal Ripken 13-year-old Southwest Regional tournament in Eagle Pass, Texas.

3It was the first of a career-high six home runs James Shields allowed in this game. Arencibia was the first Blue Jays player to hit a home run in his first at-bat since Junior Felix homered against Kirk McCaskill on May 4, 1989. Felix’s homer also came on the first pitch.

4 Daniel Nava of the Red Sox had also homered on his first major-league pitch on June 12. His was a grand slam against Joe Blanton.

10 This was Teixeira’s first start in nine games following a back strain.

12 Playing in his final series against Texas, this was the last of Jeter’s 199 hits against the Rangers. He started the next game but was 0-for-4. He finished with a career .327 average against Texas.

20 The Rangers had won 90 or more games each of the previous four seasons and made the playoffs three times. This was their worst season since 1985 when they finished 62-99.