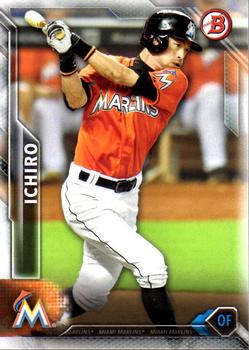 The fans were excited as they entered Marlins Park for the Friday night game pitting the Miami Marlins against the St. Louis Cardinals. While playing in the United States, Ichiro Suzuki had 2,998 hits and was only two away from the magic number of 3,000. The Marlins made it known that Ichiro would be in the lineup for this night’s contest, increasing the size of the crowd. He did not start in the previous night’s game against the St. Louis but did get a pinch-hit double in the seventh inning off the Cardinals’ Jonathan Broxton. He also sat in the Wednesday night contest against the Phillies.

To add to the excitement, the Marlins were distributing small hand fans with Ichiro’s picture on their face. As one walked around the ballpark before the game, children were waving these fans in obvious enjoyment. In addition, a sizable number of the media congregated on the field before the game. The majority appeared to be from Japan. All eyes would be on Ichiro tonight.

The starting pitchers were two right-handers, Mike Leake for the Cardinals and Jose Urena of the Marlins. Both teams had the same record of 55 wins and 47 losses going into the game. The Cardinals were led by their All-Star catcher, Yadier Molina, while Miami had slugging outfielders, Giancarlo Stanton and Marcell Ozuna. On the previous night the Cardinals beat the Marlins, 5-4.

The Cardinals got a leadoff single from Greg Garcia in the top of the first but he was stranded at first base as the next three batters made outs. In the bottom of the inning, Dee Gordon grounded out to the pitcher leading off, then Martin Prado singled. Ichiro came to bat. On a 3-and-2 pitch, he hit a soft liner that was caught by Garcia at third base. Prado was doubled up at first.

In the top of the second inning, Molina led off with a single to left field. Jeremy Hazelbaker followed with a home run into the right-field stands. The next batter, Tommy Pham, was hit in the left hand by an errant Urena pitch. Initially, it appeared that Pham would have to leave but he stayed in the game. Kolten Wong then doubled to left field, scoring Pham. Urena was able to get out of the inning but not before loading the bases.

In the bottom of the second, Ozuna hit a home run to deep left field after Stanton flied out to right field. The Cardinals led, 3-1. Both pitchers faced only three batters in the third inning. In the top of the fourth, Wong led off with a triple. After Leake struck out looking, Garcia lofted a fly down the left-field line. Ichiro made the catch. Wong tried to score but Ichiro threw a strike to home plate to get him. It was estimated that Ichiro’s throw was 240 feet.1 Ichiro received a nice ovation from the fans.

Ichiro was the second hitter in the bottom of the fourth. After Prado grounded out to third base, Ichiro hit a weak grounder in front of home plate and was thrown out by Molina. Ichiro was now hitless in two at-bats.

In the fifth inning the offenses for both teams exploded. For the Cardinals, Matt Holliday legged out an infield hit. Matt Adams walked. Molina doubled to deep center field, scoring Holliday and sending Adams to third. Hazelbaker was intentionally walked but Pham singled to left field, scoring Adams. Don Mattingly, the Marlins manager, replaced Urena with Mike Dunn. Wong greeted Dunn with a single, scoring Molina. Dunn then walked pitcher, Mike Leake, forcing in a run. Garcia followed with a single, scoring Pham. Aledmys Diaz then flied out and Wong scored after the catch. To end the inning, Holliday grounded out to shortstop. The Cardinals’ six-run inning extended their lead to 9-1.

The Marlins retaliated in their half of the inning. Ozuna doubled to left. Derek Dietrich struck out. Ozuna moved to third on J.T. Realmuto’s groundout to second. Miguel Rojas doubled to left field, scoring Ozuna. Chris Johnson followed with a double to deep center field and Rojas scored. Gordon, the next batter, used his speed to beat out a squibber in front of the plate, with Johnson moving to third. Prado, on a 1-and-0 pitch, hit a home run down the left-field line. The Marlins were back in contention. Prado was excited, as were the fans; he was later quoted as saying, “For a moment after I hit it, you felt the energy in the stadium. The people got into the game.”2 Ichiro grounded out to shortstop, ending the inning with the score 9-6, Cardinals.

Nick Wittgren was the Marlins’ pitcher in the top of the sixth and was greeted by Adams’s single. With two out, Pham hit a long home run over the center-field fence, extending St. Louis’s lead to 11-6.

Molina led off the Cardinals’ eighth with a single. With one out Pham struck out looking. After the game, Pham admitted that he took the called third strike because he couldn’t swing the bat after being hit on the left hand in the first inning. “I have anti-inflammatory pills that help you get through the game, but it was sore,” he said. “That last swing I took my hand went numb and I couldn’t swing. I literally just took the pitch strike three down the middle because I couldn’t feel my hand.”3 Mike Matheny, the Cardinals’ manager, referring to Pham’s sixth-inning home run, said, “It didn’t affect him hitting the ball to dead center in the biggest park in the country.”4

In the bottom of the eighth, Ichiro came to the plate once again. He struck out swinging against Cardinals pitcher Dean Kiekhefer. Ichiro was 0-for-4 and remained two hits shy of 3,000.

The ninth inning was uneventful. The Cardinals emerged victorious, 11-6. Mike Leake was the winning pitcher and Jose Urena was the loser. For the Cardinals the hitting hero was Wong, who had three hits and drove in two runs. Pham also contributed with his home run and three runs batted in. Prado drove in three runs for the Marlins with his fifth-inning home run. For the 27,414 fans in attendance there was disappointment; all the pregame anticipation was dissipated as Ichiro failed to get a hit.

Ichiro’s quest for hit number 3,000 would continue beyond this night. In the two last games of the series, on Saturday and Sunday, the Marlins won both. In the Sunday game, Ichiro pinch-hit but did not get a hit. He got his 3,000th hit in Colorado on August 7 when he tripled in the seventh inning after getting hit number 2,999 the day before.5 The quest for 3,000 was over.

Most of the attendees of the 46th convention of the Society for American Baseball Research attended the game. The convention was being held in Miami and the excursion to the game was arranged by the organizers. In a pregame session for the members, Don Mattingly, Barry Bonds, Andre Dawson, Tony Perez, and his son Eduardo Perez spoke to the group. Bonds was the Marlins hitting coach. Even though Ichiro did not get a hit, the SABR folks had a memorable experience. 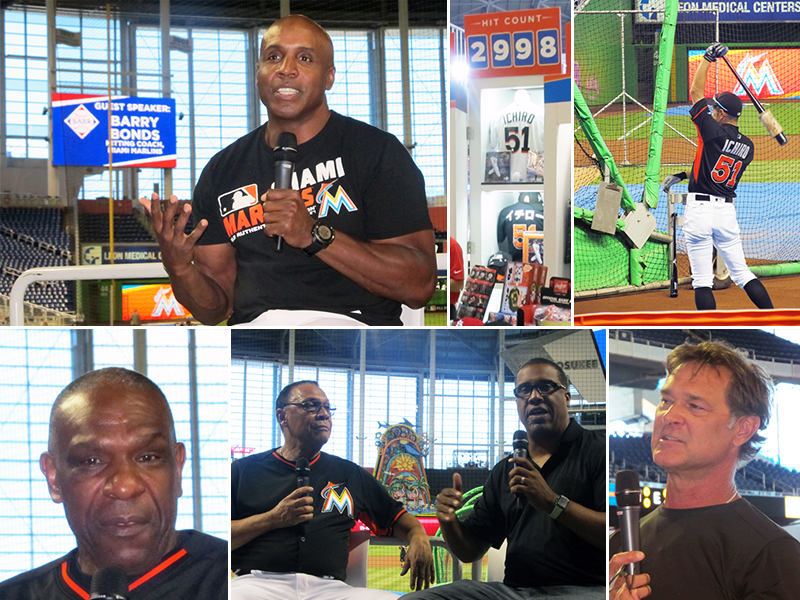 In addition to the sources mentioned in the Notes, box scores and play-by-play accounts for this game can be found on baseball-reference.com.