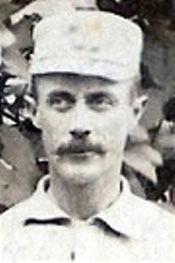 In 1883, Lon Knight was the right fielder and manager for the Philadelphia Athletic Club. On July 30 of that season, he became just the second player in history, behind Buffalo’s Curry Foley,1 to hit for the cycle. However, Knight was the first player to accomplish the rare feat in what is known as a natural order, meaning he got his hits in the order of total bases: first the single, then a double, then the triple, and finally the home run. In an American Association game in which Philadelphia demolished the Pittsburgh Allegheny Club, 17-4, Knight had five of his team’s 23 hits to pace the attack.

The game was characterized in the press for “fine fielding and heavy batting”2 by Philadelphia. There is no play-by-play available for the game, but according to newspaper accounts and the box scores, the home team Athletics batted first, as they won the coin toss and elected to bat. Approximately 6,000 people packed the Jefferson Street Grounds to watch the match, and “the enthusiasm was kept up throughout the game.”3 Bob Barr pitched for the Alleghenys, while Bobby Matthews was the Athletics’ hurler. Matthews had been a workhorse for the Athletics squad, pitching in 381 innings for the year.

Philadelphia wasted no time and put three runs across the plate in the first inning. With one out, Harry Stovey singled and stole second. Knight followed with an RBI single to center. Knight then stole second. Barr walked Mike Moynahan and Jack O’Brien, loading the bases. Fred Corey laced a double down the right-field foul line, plating two runners. Barr then worked out of a jam, holding the damage to three runs.

The visitors put runners on base in each of the first two innings but did not capitalize. In the top of the third, Knight doubled to right field. He advanced to third on a wild pitch and came home when O’Brien tripled. The Athletics added two runs in the fourth, even though Knight popped out to Barr. In the bottom half, Joe Battin homered by getting hit to left-center over [Bob] Blakiston’s head. The score was now 6-1.

In the top of the sixth, Matthews reached on an error by third baseman Battin. Barr threw another wild pitch, moving Matthews up a base. Stovey doubled to left, driving in his pitcher. Knight “followed with a hit to centre field for three bases”4 and a run batted in, and then he scored on a fly out by Moynahan. Three more runs for the home team.

Stovey started the top of the eighth with a single and trotted home on “Knight’s terrific line hit to extreme left centre for a home run.”5 Knight had just hit for the cycle. O’Brien scored on a hit by Corey. Pittsburgh posted two runs in its half, on two hits, a passed ball, a walk, and an error. The game was already out of reach in the ninth, but Philadelphia was not finished. Three consecutive singles by George Bradley, Matthews, and Jud Birchall loaded the bases. Stovey lined a single to center, and two runners came home. Knight followed with his second two-bagger, adding two more runs batted in to his line for the day. Ed Swartwood and Billy Taylor singled to start the last of the ninth, and Swartwood scored the game’s final run on a passed ball. The game ended with a score of 17-4. Only 12 of Philadelphia’s runs were earned, and only two of Pittsburgh’s.

The Philadelphia Inquirer informed its readers that three Athletic players, Knight, Stovey, and O’Brien, starred in the offense, and that Knight made “a total of eleven bases, on a home run, a three-bagger, and two doubles.”6 However, the paper’s box score listed him with five hits and 12 total bases (which accounted for the missing single). The Times, also a Philadelphia newspaper, gave its readers the straight scoop, noting that “Knight led for the home club in work with the willow, making a single, two two-baggers, a triple-bagger and a home run.”7 In addition to accomplishing the rare feat of hitting for the cycle, Knight had scored five runs and had driven in six.

Further, “the heavy batting of the home club really demoralized the visitors and their fielding was not first-class by any means.”8 The Athletics had six runners reach because of Pittsburgh errors. Every Philadelphia player except Blakiston got at least one hit. Matthews picked up the victory. He finished the 1883 season with 30 wins against 13 losses. For the losers, Barr ended the 1883 campaign with a record of 6-18. A consolation bright spot for the Alleghenys was that four batters – Swartwood, Taylor, Battin and Frank McLaughlin – each collected two hits.

First baseman Stovey was Philadelphia’s slugger. In 1883, his first year with the Athletics, he led the American Association in runs scored (110), doubles (31), home runs (14), and slugging percentage (.506). He was 5-for-6 with a double in this contest. Although he didn’t homer in this game, Stovey’s 14 round-trippers set a league record for most home runs in a single season, eclipsing Boston Red Stockings left fielder Charley Jones’s 1879 mark of 9.9 O’Brien, the team’s catcher, was 4-for-5 with a triple.

Seventeen batters have hit for the cycle in natural order, as of the 2021 season.10 The most recent was the Texas Rangers’ Gary Matthews Jr., who accomplished the feat on September 13, 2006, in a game against the Detroit Tigers at Comerica Park.

The 30-year-old Knight had been playing professional baseball since 1875,11 but this was his first season with Philadelphia’s Athletic Club. On a team that batted .262 for the season, Knight’s .252 average was seventh-best for the regular players. This was his only home run of the season and just the second of his six-season career, but it was enough to hit for the cycle. 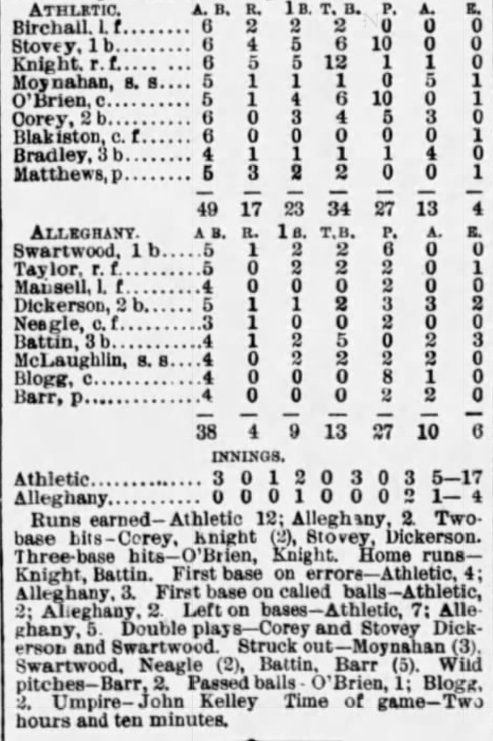 In addition to the sources mentioned in the notes, the author consulted Baseball-Reference.com and Retrosheet.org.

1 Foley, also a right fielder, hit for the cycle on May 25, 1882, in a National League game that pitted the Buffalo Bisons against the Cleveland Blues. Foley’s cycle was in reverse natural order, meaning that he hit a home run (it was a grand slam) in the first inning, a triple in the second, a double in the fifth, and a single in the seventh.

9 Stovey held the single-season home-run record for just one year. In 1884, Chicago White Stockings third baseman Ed Williamson socked 27 home runs, a single-season mark that stood 35 years until 1919, when Boston Red Sox outfielder and pitcher Babe Ruth hit 29. Stovey was also the major leagues’ career home-run leader from 1889 through 1894, when he retired with 122.

10 Given the available play-by-play data. They are: