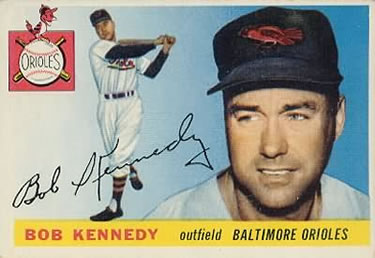 Following a last-place finish by the Orioles in 1902, the city of Baltimore was left without a major-league franchise. The team packed up and relocated to New York, leaving disheartened Charm City fans rooting for a series of minor-league franchises for the next 50 years.1

The Boston Braves’ move to Milwaukee in 1953 began a relocation trend, which lasted throughout the decade. After the St. Louis Browns’ last-place finish in 1953, owner Bill Veeck considered several viable options for relocating his team, rather than habitually play second fiddle to a wealthy Cardinals organization.2

Meantime, Memorial Stadium, known fondly as “the old gray lady of 33rd street,” received an extensive renovation in 1953, including expanded seating capacity to 47,866. The other owners blocked Veeck from moving the club to Baltimore, so he was forced to sell to a syndicate based in Baltimore, and fellow club owners subsequently voted to approve the move.3

When the club bade farewell to St. Louis, the contract of Browns manager Marty Marion was not renewed. In turn, the relocated franchise named baseball veteran Jimmy Dykes as the new skipper. Baltimore opened the 1954 season on April 13, splitting a two-game series with the Tigers in Detroit.

Robert Daniel Kennedy was born in Chicago on August 18, 1920. In 1939 he made his major-league debut, with his hometown White Sox. He remained in the Windy City until Cleveland traded for his services in 1948, just in time for Kennedy to appear in three games with the Indians, during the 1948 World Series; he went 1-for-2 with Cleveland, which defeated the Boston Braves in the fall classic.4

On the pleasant evening of Friday, July 30, 1954, a crowd numbering 27,385 filed into Memorial Stadium in anticipation of the 8:00 P.M. start time. Right-hander Don Larsen was the Orioles’ starting pitcher; his mound opponent was the Yankees’ veteran right-hander Allie Reynolds.

Baltimore got right down to business in the bottom of the first inning, when Cal Abrams walked, took second on a single by Chuck Diering, then scored when left fielder Kennedy stroked a sharp single to right. In the third inning, Vern Stephens singled to center and moved to second on Kennedy’s base on balls. Next up, Orioles catcher Clint Courtney smacked a solid triple to right field, scoring Stephens and Kennedy, giving the Orioles a 3-0 lead.

Don Larsen led off the bottom of the fourth with a groundout to second. An error by Yankees first baseman Joe Collins allowed Cal Abrams to reach base. A single to right by Eddie Waitkus moved Abrams to second. Reynolds walked Diering, putting runners on second and third. A groundout by Vern Stephens forced Abrams at home, as Waitkus moved to third and Diering to second.

With the bases still loaded, Kennedy returned to the batter’s box. The 6-foot-2 outfielder powered a fastball served up by Reynolds into the left-field stands. The enthusiastic hometown crowd cheered wildly, celebrating the first grand slam at freshly renovated Memorial Stadium; Waitkus, Diering, and Stephens, scored on the decisive blow.5

Allowing seven runs (three earned) in four innings earned Reynolds an early shower, as reliever Marlin Stuart took the mound for New York. Despite the pitching change, Kennedy’s day continued, with two outs in the bottom of the sixth. His sharp single to right scored Waitkus, giving the Orioles a solid 8-0 lead.

Left-hander Bob Wiesler relieved Stuart in the Orioles’ seventh and walked the first three batters he faced, including Larsen. After getting Abrams to pop out to short, he walked Waitkus, too, bumping the score to 9-0 before getting the final two outs on fly balls.

The Baltimore onslaught continued into the eighth inning, as Kennedy walked and took second on Billy Hunter’s groundout. Kennedy and Hunter executed a double steal, and Kennedy scored on a wild throw by Yankees catcher Yogi Berra. When the carnage finally ended, the O’s had handily defeated New York, 10-0. Larsen chalked up his third victory of the season, albeit against 13 losses.

Adding insult to injury, the game took place on the 65th birthday of Yankees manager Casey Stengel; needless to say, the old perfessor was in no mood to celebrate.

The Orioles ended the 1954 season in seventh place, posting a 54-100 record. The Yankees clearly had an offyear following five consecutive (1949-1953) pennants. The door was open to a talented Cleveland Indians ballclub, which captured the American League pennant by winning 111 games. A formidable New York Giants team swept Cleveland in the World Series.

The rebirth of the Orioles had forced the incumbent minor-league club out of the International League and resulted in an order requesting payment of $48,749.61 to the league. The sum represented compensation for lost attendance; the figure was computed at 7 cents a person over a three-year period.7

The Chicago White Sox purchased Kennedy on May 30, 1955, marking his return to the city where he played from 1939 to 1948 minus time served during World War II and the Korean War. (Kennedy was a Marine Corps fighter pilot in both wars.) After a brief stop with Detroit in 1956, Kennedy ended his career with the Brooklyn Dodgers in 1957. In his final at-bat, he made the last out ever recorded by the Dodgers in Brooklyn; the club moved to Los Angeles in 1958.

Kennedy hit a lifetime .254, playing in parts of 16 major-league seasons. He went on to become a major-league coach, manager, scout, and front-office executive. Following the Chicago Cubs “College of Coaches” experiment, Kennedy was appointed to become the sole manager of the team. His oldest son, Bob, pitched in the minor leagues, while younger son Terry Kennedy became a big-league catcher. Robert Daniel Kennedy died in 2005 at the age of 84 in Mesa, Arizona.