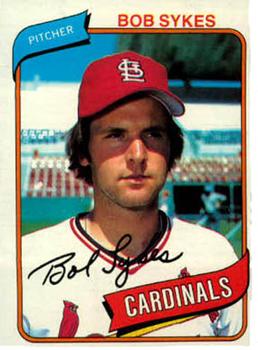 Not even the oppressive St. Louis heat could break Bob Sykes on the Fourth of July in 1980. With the Busch Stadium on-field temperature a reported 140 degrees,1 the Cardinals left-handed pitcher spun a 10-inning shutout against the Philadelphia Phillies.

Center fielder George Hendrick hit a walk-off home run with one out in the bottom of the 10th, giving the Cardinals a 1-0 victory and rewarding Sykes for his eye-popping performance. Hendrick’s blast came on a 1-and-0 pitch from Phillies reliever Kevin Saucier and hit a Stadium Club window high above the left-field wall. Sykes didn’t see it, having retreated to the tunnel between the Cardinals dugout and clubhouse to catch a break from the sauna-like conditions.

“It was so hot we were soaking our feet in ice because our spikes were causing blisters on the bottom of our feet,” said Sykes, who lost 23 pounds during the 1-hour, 56-minute Friday matinee. “And then we had ammonia towels over our heads between innings. I was on dirt. It was my cohorts who were burning up [on the AstroTurf]. It looked like they were dancing out there. Man, it was hot.”2

Sykes became the second Cardinals pitcher to author an extra-inning shutout in a month; Jim Kaat beat the New York Mets, 1-0, in 10 innings on June 4 at Shea Stadium. But Sykes was the first to accomplish the feat in St. Louis since Joe Presko beat the Brooklyn Dodgers, 1-0, in 10 at Sportsman’s Park in June 1952.3 Eric Rasmussen held the Cincinnati Reds scoreless for 10 innings at Busch in September 1976, in a game St. Louis won, 1-0, in 11.4

The whitewashing was the first for Sykes since he came to the Cardinals from the Detroit Tigers in December 1978.5 He scattered eight hits (five singles and three doubles) while walking one and striking out three. Sykes lowered his ERA from 5.47 to 4.64 and improved his record to 3-6 with his second straight win.

“If it was only a two-month season and you get off to a bad start, then you are in trouble,” Sykes said. “But it’s a six-month season. If you believe in yourself, you can turn things around. It finally happened. The nicest thing about this is I have the respect of my teammates. And I have the fans in St. Louis behind me. I got off to a bad start this year. I would have gotten on me if I was a fan.”6

The Phillies had multiple opportunities to score. Their best chance came in the eighth. With two outs, Pete Rose reached on an infield single to shortstop and attempted to score on a bloop double to right field by Greg Luzinski. St. Louis right fielder Leon Durham misjudged the ball initially but recovered to throw out Rose at the plate, with catcher Ted Simmons applying the tag.

Philadelphia’s Lonnie Smith hit a one-out double in the third and advanced to third on a fly out but was left there as Rose flied out to center. After allowing one-out singles to Garry Maddox and Bob Boone in the fourth, Sykes retired 10 consecutive Phillies, eight on popups or fly outs and two on groundouts. The script played out almost exactly as Kaat told the 25-year-old Sykes it would before the game — the effects of the heat would diminish after the fifth inning.

“Sure enough, the sixth inning rolled around and I got a shot of new life,” said Sykes, who admitted to getting dizzy on the mound while forgetting how many outs there were and losing track of baserunners.7

Boone hit a one-out double in the ninth and pinch-runner George Vukovich advanced to third on a groundout, but he was stranded as John Vukovich popped out to second. In the 10th, Keith Moreland singled leading off and moved to second on a sacrifice by Smith and to third on a groundout. Sykes again got Rose to fly out to center to keep the game scoreless and set the stage for Hendrick’s heroics. All told, the Phillies were 0-for-8 with runners in scoring position and left nine runners on base.

Among the crowd of 15,481, fans behind the Cardinals’ first-base dugout gave Sykes a standing ovation after the eighth, ninth, and 10th innings.8

Meanwhile, Nino Espinosa made his first start of the season for Philadelphia after recovering from bursitis in his right shoulder. He worked eight impressive innings, limiting the Cardinals to two hits — a single by Durham in the first and a double by Simmons in the seventh. In between, Espinosa retired 18 of 19 batters, walking Dane Iorg in the second. Hendrick narrowly missed a homer leading off the second with a shot to the warning track in left.

After his game-winner, Cardinals vice president for public relations Jim Toomey implored Hendrick to forgo his standing practice of not talking to the media.9 “Let them write what they saw,” retorted “Silent George.” Hendrick was enjoying a banner season, ranking second in the National League with 62 RBIs and fourth with 17 home runs to go with a .310 batting average at day’s end on his way to the All-Star Game.

The game had more ejections than runs. St. Louis first baseman Keith Hernandez was tossed in the fourth inning by home-plate umpire Paul Pryor for arguing a strike call. First-base coach Dal Maxvill got the heave-ho in the ninth from second-base umpire Joe West after Bobby Bonds was called out on a ball caught by Smith in right field; Maxvill thought the ball hit the turf when Smith fell to the ground upon making the grab. Additionally, a spectator was ejected in the seventh for pouring beer on Rose as he caught a foul popup down the right-field line.

The Cardinals scored merely one run for third straight game; Philadelphia had beaten them, 2-1 and 8-1, in the first two games of a five-game holiday weekend series. They continued to reside in last place in the NL East Division with a 33-45 record, 9½ games behind the Montreal Expos. The win did improve St. Louis to 15-11 under manager Whitey Herzog, who took over for the fired Ken Boyer on June 9.

“That was a dream game,” said Sykes, who made his offseason home in Carmi, Illinois, some 135 miles east of St. Louis. “It was a day that every ballplayer prays you have at least one of, where everything goes perfect. And then George hit that home run. He got to home plate and I gave him a big kiss — on the cheek.”10

Philadelphia (40-34), which trailed Montreal by a half-game after being blanked, went on to win the division by a game over the Expos. The Phillies wound up 91-71, beat the Houston Astros in the NLCS, and topped the Kansas City Royals to capture their first World Series championship. The Cardinals finished fourth, 17 games out, with a 74-88 record.

Sykes, who underwent surgery to remove a blood clot in his left shoulder in 1979, pitched two more shutouts in 1980 — a three-hitter at Philadelphia on August 6 and a four-hitter against Montreal at home five days later. Unlike his Independence Day gem, those shutouts were not close games: The Cardinals won by scores of 14-0 and 16-0. Sykes finished the season with a 6-10 record and a 4.64 ERA.

“He’s one of the things we have to find out about,” Herzog said in August. “We’ve still got to find out whether the guy can do it. He teases you. He keeps you in suspense. But so far, he’s done pretty good.”11

After making just one start and pitching but 37⅓ innings during the strike-shortened 1981 season, Sykes, the Cardinals’ player representative, was traded to the New York Yankees on October 22 for minor-league outfielder Willie McGee. He never pitched in the major leagues again, spending one season in the Yankees’ farm system before being released. McGee enjoyed a wonderful career with the Cardinals from 1982-90 and 1996-99.

“The deal kind of ranks up there with the Brock for Broglio deal,” Sykes said, referring to the June 1964 trade in which the Cardinals acquired future Hall of Fame outfielder Lou Brock from the Chicago Cubs for pitcher Ernie Broglio as the centerpieces of the six-player transaction. “But I mean this, from the bottom of my heart … if a ballplayer has to get traded and leave a place where you love to be — it’s great to know that the guy who replaced you there turned out to be such a great human being.”12

3 Two others Cardinals pitched extra-inning shutouts on the road between 1952 and 1980, both winning 1-0 in 10 innings in Cincinnati: Larry Jackson in July 1958 and Bob Gibson in September 1968.

4 Rasmussen’s given first name at birth was Harold, and he went by Harry until he legally changed his name to Eric after the 1976 season. The Reds’ Fred Norman also pitched 10 shutout innings in the game before the Cardinals scored against Rawley Eastwick.

5 The Cardinals acquired Sykes and minor-league pitcher John Murphy from Detroit in exchange for pitcher Aurelio Lopez and outfielder Jerry Morales on December 4, 1978.

6 “Sykes, Hendrick Gang Up on Phils.”

7 “Sykes, Hendrick Gang Up on Phils.”

8 “Sykes, Hendrick Gang Up on Phils.”

9 According to a September 19, 1983, Sports Illustrated story by Steve Wulf titled, “To Know Him Is to Love Him,” “Hendrick’s aversion to the press started when he was with Cleveland, from 1973 to ’76.”