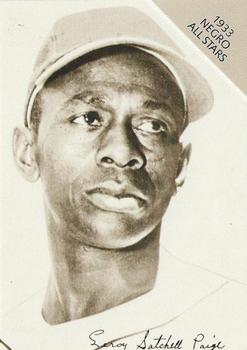 No other player in the history of the Negro Leagues is as mythicized as Leroy Robert “Satchel” Paige. At age 42 in 1948, he set baseball’s record for the oldest rookie; at 59 he became the oldest player ever when he pitched three innings against the Boston Red Sox as a member of the Kansas City Athletics. Cleveland Indians owner Bill Veeck, who brought Paige across baseball’s color barrier, said, “If his career had run its full course in the major leagues, Paige would have held every record there was.”1 In 1971 Paige became the first player who spent the majority of his career in the Negro Leagues to be inducted into the National Baseball Hall of Fame.

His legend was forged during his time in the Negro Leagues. At 6-feet-6-inches, it was said that he could throw the ball from every arm position at every speed.2 Paige’s fastball, curveball, and “hesitation pitch” (which involved his pausing in the middle of his windup) all wreaked havoc on batters throughout his more than 20 seasons in the Negro and Winter Leagues and during his barnstorming appearances, which involved locally prepared games with all levels of talent ranging from major-league players to amateur athletes. While his statistics are incomplete, he estimated he pitched in 2,600 games, including barnstorming games, and threw 300 shutouts and 55 no-hitters during his career.3

In August 1931, at the height of the Great Depression, Paige joined the Pittsburgh Crawfords, an independent club. By then, he had already established himself as a premier and expensive pitcher in stints with the Chattanooga Black Lookouts, Birmingham Black Barons, and Cleveland Cubs. As teams struggled to fill the stands and meet payroll, Crawfords owner Gus Greenlee decided the way for his team to survive was to go big. The businessman and numbers banker kept Paige and brought in slugger Josh Gibson for the 1932 season.4

Losses like that hit Paige hard. Buck O’Neil, a former Kansas City Monarchs teammate and pallbearer at Paige’s funeral, said, “Satchel was something else when he lost. If you were on his team, you knew to stay a long, long way from him. He did not take to losing. You did not want to be around him if he got beat. No sir.”7

Paige got an opportunity for revenge against the Black Yankees less than three months later in the second game of a doubleheader on July 8 at Greenlee Field. In the first game, Pittsburgh’s Ted Radcliffe pitched in a 9-7 loss to New York. In the second, Radcliffe played catcher for Paige, exemplifying his “Double Duty” nickname.

The 26-year-old Paige was on top of his game that day. Radcliffe said he knew that the Black Yankees were in trouble from the first pitch Paige threw to him and asked each batter, “Now why would you want to insult Satchel like that by bringing a bat to the plate.”8

It was a scoreless duel for Paige and New York pitcher Neck Stanley for the first three innings. But the Crawfords broke through for two runs in the bottom of the fourth inning, giving Paige all the support he needed. They tacked on two more runs in the sixth and two in the eighth. The star-studded middle of Pittsburgh’s lineup did most of the damage: Ted Page (who had joined the Crawfords during the season), Gibson, Judy Johnson, and Oscar Charleston, batting second through fifth, combined for nine hits and all six runs scored.9 Two of the hits came from Paige, including a double.10 Of 12 hits by the Crawfords, six were for extra bases.11

Meanwhile, Paige struck out 11 Black Yankees – whose lineup included stellar talents in Tubby Scales, Hawk Thomas, Crush Holloway, and Fats Jenkins – and walked three.10 Only one New York batter made it to third base and that was the result of a walk and two miscues.9

According to the Pittsburgh Courier, coverage of the game, the last out, completing the first no-hitter of Paige’s professional career, came on a strikeout. When the umpire called it, the cheers of the crowd could reportedly be heard a half-mile away. Teammates joined Paige on the mound and fans had to be held back from rushing the field.12

The game was the first no-hitter pitched at Greenlee Field and the first shutout of the Black Yankees for the season. The Chicago Defender wrote, “His mound work in Saturday’s twin affair was one of brilliance.”13

Now, did the loquacious Paige modestly celebrate this milestone? It is highly unlikely. Ted Page once said, “When Satch pitched a no-hitter, he told the whole world about it.”14

The Crawfords ended the season at 55-36-2; they played more top-level competition than all of their fellow independent clubs combined. The Black Yankees went 17-14-1. Paige finished the season with a 9-6 record and a 2.28 ERA. Radcliffe was second on the team in pitching with a 9-7 record and 3.74 ERA. In October the Los Angeles Daily News was already calling Paige “one of the greatest colored mound men in the history of baseball.”15

That would be the last season for Paige in Pittsburgh. He was lured to the Dominican Republic by dictator Rafael Trujillo to play for a super team in the Dominican summer league. He also persuaded other Crawfords stars, including Bell and Gibson, to join him. They quickly learned that Trujillo, who ordered the death of thousands during his 31-year reign, was not forgiving of players who lost. Fortunately for them, they won the championship game with Paige retiring the final six batters in a 4-3 victory. Then they got out of the Dominican Republic as fast as they could.16

The loss of talent and financial hardships because of the Depression caused the Crawfords club to collapse after the 1938 season. That year, the city of Pittsburgh also claimed Greenlee Field by eminent domain and demolished it to build a housing project.

In 1940 Paige joined the second Negro League powerhouse of his career when he signed with the Kansas City Monarchs. There, his legend only grew.

In addition to the sources cited in the Notes, the author consulted the Seamheads.com, Baseball-Reference.com, and Retrosheet.org websites.

1 Thomas Boswell, “Satchel Paige Was One of Baseball’s Best. It Didn’t Take an Announcement to Know That.” Washington Post, December 18, 2020.