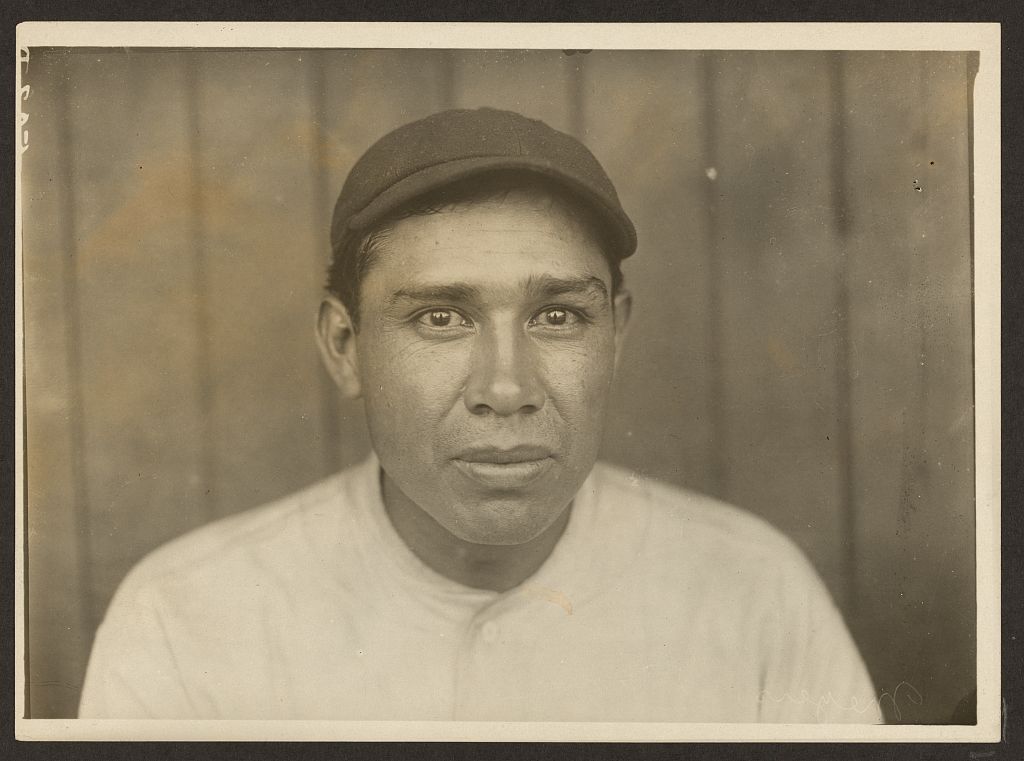 A respectable crowd1 passed through the turnstiles at the Polo Grounds for a Monday afternoon matchup between the top two teams in the National League, the New York Giants and the Chicago Cubs. Included in the audience were sailors from the German Navy,2 whose ships were docked in the Hudson River.

Chicago (24-18) came into this game having won nine of their last 10 games. They had outscored their opponents 58-26 in that span. The Giants’ streak was even more impressive. They had won 15 of 16, raising their mark to 34-7, and they came into this contest with a 10½-game lead over the second-place Cubs. In their current six-game winning streak, they had scored 70 runs!

Two right-handers faced off on the mound, Hooks Wiltse for the Giants and Lew Richie for the Cubs. Wiltse did not fare well lifetime against the Cubs, owning a 13-20 record despite a very good earned-run average.3 Often used as a reliever, Wiltse was making his fourth start of the season. In six appearances totaling 41⅓ innings pitched so far in 1912, Wiltse had not yet allowed an earned run. Richie, on the other hand, had a career record of 11-8 against the New Yorkers coming into this game. He had pitched earlier in the season against the Giants, on May 11, and had been saddled with his first loss of the year.4

Wiltse’s control was not sharp; he walked Jimmy Sheckard and Frank Schulte to start the game. Joe Tinker then “placed a neat bunt just where the Giant inner works wasn’t looking”5 to load the bases. Heinie Zimmerman bounced a grounder to force Tinker at second, and Sheckard scored the game’s first run. Wiltse worked his way out of the inning with no further damage.

In the bottom of the first, a similar scene emerged. Richie walked Josh Devore, then Larry Doyle reached on an infield single, sending Devore to third. Fred Snodgrass’s fly ball plated Devore to tie the score. Red Murray gave the crowd something to cheer about when he drove Richie’s offering into the right-field grandstand for his first home run of the year.6 New York had grabbed a 3-1 lead.

Chief Meyers led off the bottom of the second for New York and “he lambasted the ball into the left field stand”7 for his fifth home run of the season. Richie was yanked by Cubs manager Frank Chance, and Mordecai “Three-Finger” Brown was handed the ball. The Giants added a run off Brown in the third, increasing their lead. In the top of the fourth, Zimmerman greeted Wiltse with a shot over the wall, just inside the left-field foul pole, his seventh round-tripper. That extended his hitting streak to 11 games.

Then, in the sixth, the Cubs took the lead, as “the heavy firing took place.”8 Ward Miller started things with a single to center. Vic Saier walked and Johnny Evers dropped a bunt for a base hit. The Cubs had loaded the bases. Jimmy Archer also laid down a bunt, and beat out the throw. The bases remained loaded and Miller had scored. Tommy Leach entered as a pinch-hitter for Brown. Leach had been obtained by the Cubs in a May 30 trade with the Pittsburgh Pirates.9 In this, his first game with Chicago, Leach “whaled a single to left field,”10 driving in Saier and Evers. New York manager John McGraw made a pitching change, bringing in Doc Crandall to relieve Wiltse. Sheckard fouled out but then Crandall walked Schulte, filling the sacks again. Tinker’s fly scored Archer, and Chicago now had the advantage.

Chicago kept up the attack. In the eighth Schulte tripled with one out and scored on Tinker’s single. In the home half, Jimmy Lavender, now in relief of Brown, retired the first two batters but then walked Beals Becker and Buck Herzog, bringing Meyers to the plate. The Cubs had a meeting at the mound to discuss how to pitch to Meyers, and in the end, according to the New York Times, “it was decided that about the best thing Lavender could do was to strike him out,”11 supposing that the Giants would expect Meyers to be walked. Meyers swung at the first pitch and “lammed a twister into left field”12 inside third base for a triple, sending Becker and Herzog across home plate to knot the score. Lavender retired Art Fletcher on a fly ball, stranding Meyers at third.

Nothing happened in the ninth, so the game went into extra innings. In the top of the 10th, Zimmerman delivered the crushing blow to the Giants. With one out, Tinker lined the ball to the left-field fence for a double, and when shortstop Fletcher bungled the relay from Devore, Tinker continued to third, bringing Zimmerman to the plate. McGraw “wigwagged to Crandall to pass Zimmerman,”13 calling for the intentional walk. Catcher Meyers stood up and waited well off the plate for the pitch. Crandall then delivered a pitch that was high and outside, but, “Zimmerman took a running jump at the ball. He reached it high above his head and smashed it into the right field grandstand,”14 giving the Cubs a 9-7 lead.

The game was not yet over. New York still got to bat, and down to their final out, the Giants rallied. Becker and Herzog singled, bringing Meyers back into the batter’s box. The crowd “was on the verge of riotous enthusiasm,”15 screaming for another home run. Meyers sent a high Texas Leaguer into left field, out of reach of the fielders and good for two bases. Becker scored easily, but third-base coach Wilbert Robinson held Herzog up at third. McGraw sent Tillie Shafer in to run for Meyers, who represented the winning run at second base. But Fletcher hit an easy grounder to Evers at second, who juggled the ball but made the throw to first in time for the final out. The Cubs had won, 9-8.

The Giants won the next three games, and on June 19 started a 16-game winning streak, outscoring their opponents 141-78. They cruised to the NL pennant but lost the World Series to the Boston Red Sox. This game was only the 15th played at the Polo Grounds so far in the season, yet 14 of them featured home runs (with the Giants sluggers owning 13 of 18 circuit clouts). Chicago won 91 games in 1912, but that was only good for third place, 11½ games behind the Giants. 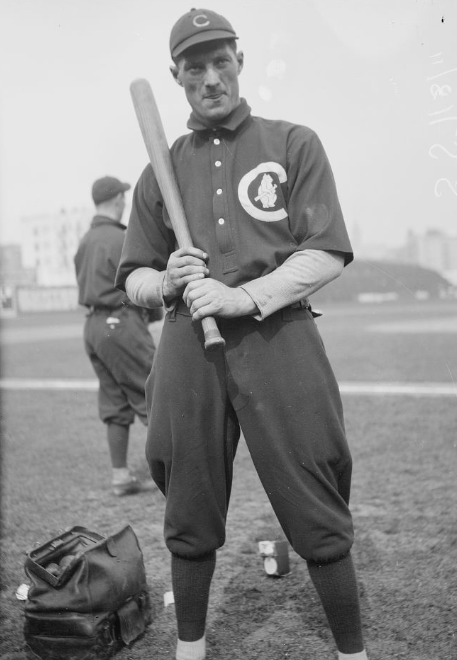 Zimmerman hit his seventh and eighth homers of the season and drove in four runs. Amazingly, his 2-for-6 performance at the plate dropped his batting average from .417 to .414. Zimmerman led the National League with a .372 batting average, 207 hits, 41 doubles, 14 home runs, and 104 runs batted in. He became just the fifth player in history to win baseball’s Triple Crown.

Sometime between the second and eighth innings, Meyers singled, getting him that fourth hit necessary for the cycle.16 He went 4-for-5 with four RBIs as well. The Chief raised his batting average 17 points (to .384) and added 59 points to his slugging percentage (.592). Meyers became the second batter to hit for the cycle in 1912, with his accomplishment coming the day after Boston’s Tris Speaker did so against the St. Louis Browns. Two others cycled in 1912: New York’s Bert Daniels became the first Yankees player to hit for the cycle, on July 25, and Honus Wagner accumulated the four different hits on August 22. As far as franchise records are concerned, Meyers became the seventh Giant to accomplish the rare feat, doing so eight years after Sam Mertes (October 4, 1904).

Doc Atkinson of Chicago’s Inter Ocean wrote that this was “one of the greatest baseball games Manhattan has ever passed into history.”17 According to the New York Times, “at times the game looked like a batting duel between Zimmerman and Chief Meyers, for every time these smashers came to bat and runs were needed there followed a tremendous drive.”18 The extra-inning game had meant that the “German sailors were late getting back to their ships.”19

1 According to the New York Times, the crowd numbered 10,000. The Chicago Tribune estimated 15,000 fans in attendance. Both Baseball-Reference.com and Retrosheet.org list the attendance figure at 12,000.

9 The Pirates traded Leach and Lefty Leifield to the Cubs for King Cole and Solly Hofman.

16 Play-by-play is not yet available on either Baseball-Reference.com or Retrosheet.org. Accounts of the game are taken from newspaper articles, and although the innings listed for the double, triple, and home run are accurately described, and the box score lists four hits (one of each type), the author did not find evidence of exactly when the single occurred. Meyers homered in his first at-bat and hit the triple and double in his last two at-bats.