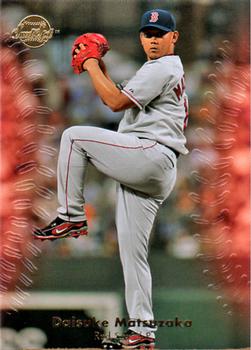 The rain delay at the start of the Lehigh Valley IronPigs’ game of June 16, 2008, lasted almost as long as the time it took to play the actual game. Fans and players waited out the storm for 2 hours and 15 minutes, while the game took 2 hours and 40 minutes.1

Fans who rode out the rain delay received a double share of memories from the long evening. First, they saw Boston Red Sox pitcher Daisuke Matsuzaka make a five-inning rehabilitation start for the visiting Pawtucket Red Sox in his first US minor-league appearance. After Matsuzaka departed, they then saw a thrilling ninth-inning rally that fell just short, as “Dice-K” and the Red Sox walked away with a 9-6 victory.

Matsuzaka’s career in Boston fell short of expectations. But when he came to Allentown to make his rehab appearance, he was among the most talked-about players in American professional baseball. After eight successful seasons with Seibu in the Japanese Pacific League, the right-hander, known for throwing a mysterious, sharp-breaking pitch called the “gyroball,”2 signed a six-year, $52 million contract in December 2006 with the Red Sox – who had already bid more than $51 million for the right to negotiate with him.3

Matsuzaka won 15 games for the World Series-winning 2007 Red Sox and finished fourth in the American League Rookie of the Year voting. He got off to an 8-0 start with a 2.53 ERA the following season before injury struck. He suffered a minor rotator-cuff strain in a May 27 start against Seattle and went on the disabled list the following day.4 The Red Sox announced on Monday, June 16, that Matsuzaka would start for their Triple-A Pawtucket team that night. The announcement sparked a rush on tickets in Allentown, where the paid attendance topped 8,800 despite heavy clouds and a thunderstorm watch.5 Heavy rain that day elsewhere in the mid-Atlantic region resulted in the cancellation of what was slated to be the final Hall of Fame Game at Doubleday Field in Cooperstown, New York, the end of an exhibition tradition dating to 1940.6

Pawtucket and Lehigh Valley both played in the North Division of the International League. Manager Ron Johnson’s PawSox were second in the division with a 42-30 record, two games behind the Scranton/Wilkes-Barre Yankees. Skipper Dave Huppert’s IronPigs, a Philadelphia Phillies farm team, sat at the bottom of the division with one of the league’s worst records, 26-46, 18 games out of first.7 Both teams benefited that season from several big-name rehabilitation stints. Pawtucket fans got to see Mike Lowell, David Ortiz, and 42-year-old Mike Timlin at various times, while the IronPigs hosted established Phillies stars Brett Myers and Shane Victorino.

Matsuzaka’s opponent on the mound was 31-year-old lefty Brian Mazone, the IronPigs’ biggest winner that season – though that wasn’t saying much for a team that finished 55-89. Mazone compiled a 9-12 record and 4.10 ERA in 28 games, all starts. He never pitched in the major leagues, though he came heartbreakingly close on September 5, 2006. The Phillies called him up for a spot start that night against Houston, but the game was rained out. Mazone was returned to the IronPigs and never received another call to the majors.8

While Mazone was struggling, Matsuzaka was showing little sign of rust. Through the first four innings, he faced the minimum 12 batters. He allowed only one baserunner, left fielder Brandon Watson, who reached on a fielding error by Lowrie and was caught stealing. He got ahead on the count to 10 of the first 12 batters, and 31 of his first 39 pitches were strikes.11

IronPigs hitters caught up to Matsuzaka in the fifth. Tracy and right fielder Chris Snelling led off with singles to right field. One out later, third baseman Brennan King doubled to left field, scoring Tracy and moving Snelling to third. A wild pitch to second baseman Oscar Robles made the score 4-2 before Matsuzaka retired shortstop Mike Rouse and Watson to get out of the inning.12 Dice-K left the game at that point. Interviewed later, he said he hadn’t gotten tired in the fifth, had succeeded in locating his fastball, and felt “ready to pitch.”13

Tracy, incidentally, had played three years earlier for Tohoku Rakuten – a rival team of Seibu in the Japanese Pacific League – but couldn’t specifically remember whether he had faced Matsuzaka that season. Another IronPig, outfielder Jon Knott, had collected a homer and a single off Matsuzaka in a 2007 spring-training game but did not play in Matsuzaka’s rehab start.14

Each team added a run in the sixth on solo homers by Pawtucket catcher George Kottaras and Tracy. Mazone left the game after six innings on the short end of a 5-3 score. Pawtucket tacked on two runs in the seventh on another home run, this one by third baseman Keith Ginter off reliever John Ennis. Single runs followed in the eighth and ninth to give the PawSox a dominant 9-3 lead going into the home team’s final turn at bat.15 Righty reliever Eric Hull, who made his only five big-league appearances with the Dodgers the season before, came on to close out the IronPigs.

Pitching in front of a much-reduced crowd, Hull got leadoff hitter Mike Cervenak on a strikeout – and then the metaphorical roof caved in. The next five IronPigs touched him for hits, with the biggest blows being a two-run double by catcher John Suomi and a run-scoring single by King, to bring the score to 9-6. Chris Smith, Pawtucket’s leader that season with 15 saves, came on with two runners aboard. Shortstop Rouse gave the fans brief hope by rocketing a fly ball to center field, the deepest part of the park, where Van Every gathered it in for the second out. Smith then got Watson to ground out to wrap up the game.16

The game was Matsuzaka’s only minor-league appearance of the year. In his first game back in the majors, on June 21, he lasted only an inning-plus against St. Louis, being rocked for six hits and seven runs and taking the loss. He finished the regular season 18-3 with a 2.90 ERA and was fourth in the AL Cy Young Award voting. In the postseason, he made one indifferent five-inning start against Anaheim as the Red Sox won the American League Division Series, then made one strong start and one poor one in the AL Championship Series as the Red Sox fell to the Tampa Bay Rays.17 Dice-K’s teammates on the PawSox reached the first round of the IL’s Governor’s Cup postseason playoffs, where eventual champion Scranton/Wilkes-Barre eliminated them.

The author, then living in the Allentown area, took his two young sons to the game – one of whom was a big Daisuke Matsuzaka fan who wore Dice-K’s number 18 on his youth soccer jersey. The family tried to ride out the rain delay. But the hour grew late, and the rain looked as if it might never let up, and they eventually left without getting to see Dice-K pitch. (They did get to see him jog, stretch, and warm up in the outfield during a rain-free period.) In researching this story, the author enjoyed finding out what he missed that night. Neither Baseball-Reference nor Retrosheet provides box scores of minor-league games, but the June 17, 2008, edition of the Allentown Morning Call published a box score.

Images taken by author. The lineup board contains incorrect information for the IronPigs: John Suomi, not Jason Jaramillo, started at catcher. 1 In a minor discrepancy, newspaper game stories say the rain delay lasted 2 hours 10 minutes, while the box score says 2:15. This story opts for the box score.

4 Keith Groller, “Matsuzaka Solid in Rehab Outing,” Boston Globe, June 17, 2008: D4. Groller was a sportswriter with the Allentown (Pennsylvania) Morning Call. In addition to contributing the Globe’s game story, he wrote a color story for the next day’s Allentown paper (see note 5.)

14 Schuler, “Dice-K Faces IronPigs.” This is essentially the “’Pigs Bow to Dice-K” story (see note 8) written for an earlier edition of the Morning Call, one published before the game ended.

17 In Game One of the ALCS, Matsuzaka pitched seven innings of four-hit shutout ball for the win. In Game Five, he gave up five runs in four-plus innings. Boston fell behind 7-0 in the latter game but rallied for an 8-7 win.