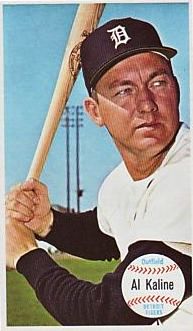 The explosive Tigers-Yankees matchup that took place at Tiger Stadium on June 17, 1961, was one of the high points of a season that served as a pivotal one for the Tigers in a number of ways. The team surprised baseball by improving from a 71-83 mark the year before, to battling the iconic yet hated Yankees for first place throughout the season. The Tigers finished with a 101-61 record, one of the greatest single-season improvements in baseball history. Up to then, only Detroit’s 1934 World Series team had achieved 101 wins or a better winning percentage, and the only Tigers teams to subsequently better the 1961 team’s mark were the World Series champions of 1968 and 1984.

Expectations were not high for the 1961 team. The prior season had been another dismal one, marking a 10-year span beginning in 1951 during which the team finished in the top half of the American League standings only one twice (1957 and 1959). The 1960 team finished in sixth place, and the season had been mostly forgettable except for an unusual trade: In August the Tigers dealt skipper Jimmie Dykes to Cleveland for Indians manager Joe Gordon. After the season the Tigers made some key moves. The club hired veteran manager Bob Scheffing and completed a bold trade, sending veteran second baseman Frank Bolling to Milwaukee in a package that brought them Bruton, a gifted outfielder; catcher Dick Brown; and reliever Terry Fox, all of whom played key roles in the 1961 team’s success. The move also opened up second base for Wood, who became the first black player to rise through the Tigers’ farm system to become a lineup regular. Indeed, he became an exciting fixture in the leadoff spot, scoring 96 runs and stealing 30 bases.

The slugging provided by Al Kaline, Rocky Colavito, and Norm Cash was a key to the team’s success. Kaline finished second in the league to Cash in batting (.324 average, .393 on-base percentage), smacking 41 doubles and scoring 116 runs in the process. Cash hit .361, and with Colavito combined for 86 homers and a lofty 272 RBIs, the latter total greater than was accumulated in their historic 1961 season by the Yankees’ Roger Maris and Mickey Mantle, the Yankees’ vaunted duo.

In addition to the firepower provided by their newly enhanced lineup, the Tigers were bolstered by stellar performances from a trio of starting pitchers: Frank Lary, Jim Bunning, and DonMossi. The three stalwarts combined for a 55-27 record and 46 complete games. When needed, they were ably supported by Fox, who came out of the bullpen to sport a 1.41 ERA.

The Tigers raced to a 17-5 start, and finished May at 29-16, 3½ games ahead of the Yankees. But the Yankees’ bats started booming in June, leading to a big weekend series in Detroit that found the teams locked in a three-way tie for first place with Cleveland. On Friday, June 16, before a packed house of 51,744 fans, Wood and Bruton combined their speed and clutch hitting to score two key runs and Phil Regan held the Yankees in check, leading the Tigers to a 4-2 victory. At night’s end, the Tigers were tied with the Indians for first place, one game ahead of the Yankees.

This set the stage for the June 17 game, attended by an enthusiastic crowd of 51,509. The pitching matchup pitted Mossi against the Yankees’ Bud Daley, who had been acquired days before in a trade with the Kansas City Athletics. Mossi had finished a mediocre 9-8 the prior year, but started 1961 strongly; he entered the big game against the Bronx Bombers with a 7-1 record. The crafty southpaw retired the Yankees 1-2-3 in the first inning, before the Tigers quickly went to work against Daley.

Wood began the uprising with a single to center. Bruton followed with a walk, and Kaline singled, loading the bases. The Tigers then banged across four runs, featuring a two-run single by Cash that sent the crowd into an uproar. After Mossi disposed of the Yankees in the second, the Tigers added three more in the bottom of the inning, as Kaline followed singles by Wood and Bruton with a double that sent Daley to an early shower.Cash then singled in Kaline. When Tigers shortstop Chico Fernandez tagged reliever Rollie Sheldon for a solo shot the following inning, the Tigers entered the fourth with an imposing 8-0 lead.

The Yankee bats awoke, however, in the top of the fourth, as Maris boomed a home run to the upper deck in right, and a succession of hits by the Bombers stunned the crowd, and shrank the Tigers’ lead to 8-5. This brought Scheffing to the mound to replace Mossi with Paul Foytack. After Foytack quelled the rally, the Tigers got one back in the bottom of the inning, and added two more in the sixth on yet another single by Bruton, and a two-run shot to deep left by Kaline. The Tigers’ star right fielder added to his superior performance when he singled home Wood in the bottom of the eighth, bringing his RBI total for the game to five and expanding the Tigers’ lead to 12-5.

In the meantime, Foytack slammed the door on the high-powered Yankees, allowing only a single by Elston Howard over the next four innings. With this strong performance, and a seven-run lead, Scheffing stuck with Foytack in the ninth. Foytack dispatched the first two hitters, Bobby Richardson and Johnny Blanchard, on fly balls, and stood one out away from victory. With the crowd poised to celebrate a second straight win, the roof began to collapse. Clete Boyer began the Yankee rally by driving a Foytack delivery into the left-field stands. Tony Kubek then ripped a single to center, which was followed by a Maris double into the right-field corner. Many expected Scheffing to go to the bullpen as the ever-dangerous Mantle came to the plate, but the Tigers’ skipper stuck with Foytack. Alas, Mantle promptly sent a Foytack offering towering over Kaline’s head, deep into the upper deck. The crowd became noticeably subdued as suddenly the lead had diminished to 12-9. Scheffing had seen enough, and replaced Foytack with veteran reliever Bill Fischer, who had joined the team in a trade during the previous season and would be gone before this one was over. Elston Howard greeted Fischer by drilling yet another home run, the Yankees’ third of the inning, this one streaking beyond Colavito’s grasp in left field. With that missile, the Tigers’ lead had shrunk to 12-10.

Scheffing walked quickly to the mound to summon Fox, who had watched the New Yorkers’ barrage while warming up in the bullpen along the left-field foul line. As Fox walked to the mound, head down in focus, the formerly raucous crowd was reduced to an astonished hush. After Fox finished his warmup tosses, the dangerous Moose Skowron ambled to the plate. Skowron had launched a two-run shot the night before. In the on-deck circle stood veteran slugger Bob Cerv. Both were very capable of continuing the home-run onslaught that had quickly turned a perceived blowout win toward a potentially disheartening defeat.

Fox wound and delivered, and Skowron took a rip, the crack of the bat producing an ominous sound. The ball screamed toward left field, but fortunately for the Tigers, its trajectory was interrupted by the presence of a well-positioned shortstop Chico Fernandez, who caught the line drive, bringing an end to the tension-filled inning, and delivering an important win to the home team. One could all but feel a gigantic exhale throughout the stadium as the Tigers gathered to pat Fox on the back as he headed toward the winners’ dugout.

With the news that the Indians had been defeated by Baltimore, the Tigers now stood alone in first place, and were assured of completing this showdown series ahead of the feared Yankees. Indeed, the Tigers went on to hold first place for almost all of June and July, generating much excitement for Detroit’s renewed rabid fan base. They still were only 1½ games behind the Yankees entering another huge series, this one on Labor Day weekend in New York. The Bombers swept the three games and never looked back, recording 109 victories. Still, the night of June 17 stood as a hallmark of an electrifying season that proved to be one of the finest in Tigers history.